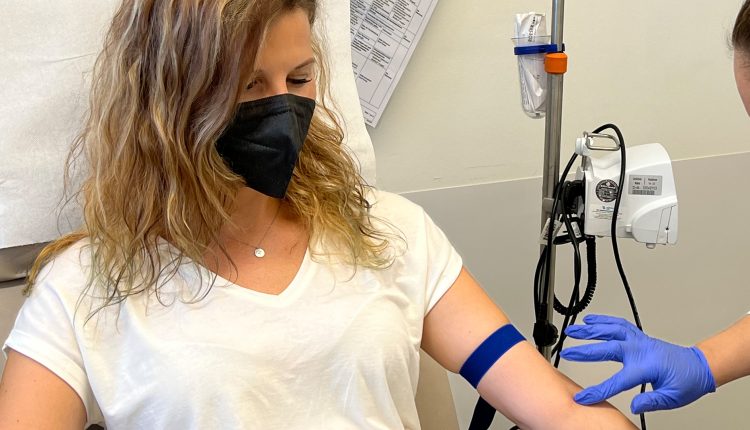 The causes of the late effects of Corona are still unknown, as it is not clear which symptoms are caused by the infection and which are not. A long-term study in North Rhine-Westphalia is now intended to clarify this.

Julia Radzwill is patiently having her blood drawn in the post-Covid outpatient clinic at Cologne University Hospital. The 38-year-old biologist has already had two infections and had previously been vaccinated twice. With the first infection in October 2021, she really got it, she says. Two months later she suffered from severe exhaustion. She could only work with breaks. And if she had made an appointment for two hours in the evening, “then the next day I felt as if I had run a marathon,” says Radzwill. It was better after the second infection, but she is still not as fit as before Corona.

Now she is one of 2000 participants of the “Beyond Covid-19” study, in which all major university hospitals in North Rhine-Westphalia are involved. Julia Radziwill was written to by the Cologne health department. Now her heart, organs, sense of smell and taste and lungs are examined every three months. “I want the disease to be better understood,” says the 38-year-old.

That is exactly the problem so far, confirms Clara Lehmann, who is responsible for the part of the study in Cologne and who heads the post-Covid outpatient clinic at the university clinic. So far there have been many observations and hypotheses, but few scientific studies that provide well-founded insights into the causes. It starts with the question of which symptoms are actually due to an infection with SARS-CoV2? Which are biologically based and which are due to psychosocial stressors related to the pandemic?

The symptoms of Long Covid can be very different: “Some have heart problems, others have difficulty concentrating, others have muscular problems so that they no longer have any strength,” says the infectiologist. But even if breathing difficulties persist, there has not yet been a clear medical explanation for this, as lung function tests often cannot prove anything.

In the meantime, one of the hypotheses being pursued is that the cause may not lie in the lungs themselves, but in the respiratory muscles. Due to an overreaction of the immune system, the body forms autoantibodies that may attack messenger substances or cell surface proteins that affect the control of the autonomic nervous system or the respiratory muscles. In other cases, it could also be the brain. But there is still a lack of more detailed information for this thesis. And another hypothesis is that residual viral components in the gut could lead to sustained immune activation.

But the knowledge for these theses is still missing. In the previous studies, there were rarely control groups that were not or only slightly ill, says Björn Jensen from the University Hospital Düsseldorf, who coordinates the study nationwide. The long-term study in NRW could now achieve this, since it includes the data of the “national cohort”. This basically addresses the question of why one person gets sick and the other stays healthy – this is exactly what the study in North Rhine-Westphalia wants to clarify in relation to Long Covid.

The scientists deliberately include psychological complaints. “In a large part of the questionnaires, we try to pick up on people’s subjective feelings,” says Jensen, i.e. to what extent people have lost their zest for life due to the illness or have gone through depression. “We are also trying to find out with the help of the control group what happened as a result of the pandemic measures and what was caused directly by the viral disease Covid-19.” The results could be available in three years.

UAE affirms its solidarity with Pakistan…

Paris: The Turkish-Libyan agreement on…

#metoo in the media: “In five…