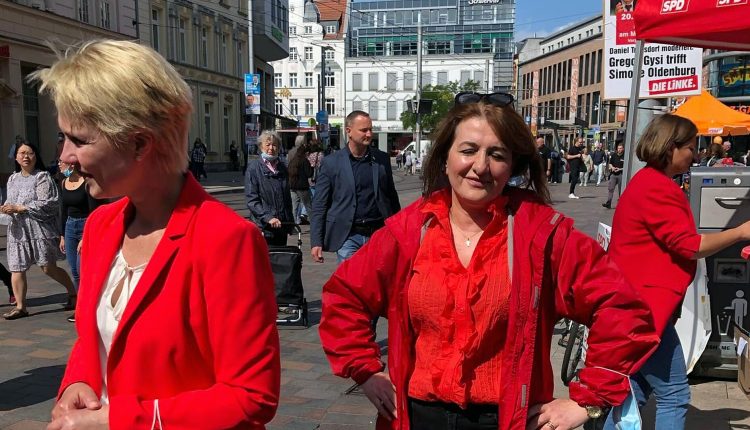 Dubious events in Mecklenburg-Western Pomerania: According to NDR research, a former SPD candidate for the state parliament used three different names. The CDU suspects lobbying for Russia behind the story, the Russian embassy denies.

Gayane Kirakosyan, Gayane Werk, Diana Werk – each with a doctorate beforehand: Under these changing names, the woman of Armenian origin met a millionaire in Mallorca, collected selfies with federal politicians, was active first in the CDU and then in the SPD, ran for party posts and finally for the state parliament in Schwerin.

At the same time, she posted birthday greetings to Russian Foreign Minister Sergey Lavrov on her private Facebook account and disseminated statements by Vladimir Putin. after the NDRresearch to do this, she relinquished her position as a successor to the state parliament.

The interior expert for the Greens in the state parliament, Constanze Oehlrich, is quite right: “Ms. Kirakosyan, that’s what I call her now, has obviously made positive comments about the Russian rulers, about President Putin, and the fact is that the Russian Federation is waging a war of aggression against Ukraine in violation of international law.” But the supreme commander of the Russian troops is now Putin. And those who comment positively on it “comment positively on criminals,” says Oehlrich.

For Sebastian Ehlers, the parliamentary director of the CDU parliamentary group, the affair is not over with Kirakosyan’s resignation: “Either we are dealing with an imposter here or with someone who was sent into the country by Vladimir Putin to do lobbying here in the Russian sense and to do other things.”

actually laying NDRResearch the assumption of a lobbyist activity close. The real estate millionaire and reality TV actor Karl-Heinz Richard von Sayn-Wittgenstein reported to the NDRthat he met Gayane Kirakosjan in his villa on Mallorca a good eight years ago. She joined him as a fan and under the name of Dr. Diana work presented. In 2019 he met her again in Berlin, when Kirakosyan offered him an “embassy post for Armenia, Russia and a third Eastern European country”. At the time, he thought the “woman has one on the marble,” says Sayn-Wittgenstein. He refused. To this day, she is listed in his telephone book as “Dr. Diana Werk, Russian Embassy”.

the NDR asked the Russian Embassy in Berlin whether they knew of a woman named Werk or Kirakosyan and whether she possibly worked for the embassy. From there it was only said that such a person does not work for the embassy, ​​whether there was any knowledge of her was not answered.

Desire for money, power and influence

Gayane Kirakosjan joined the CDU in 2014 as Gayane Werk, and in 2015 she was elected to the board of the district association’s “Women’s Union” in Schwerin, but again under the name Diana Werk. One does not have to present an ID card when joining a party, according to the Union.

CDU politician Ehlers confirmed that she had repeatedly sought contact with prominent politicians, including Angela Merkel NDR. However, she did not make a national political career with the Christian Democrats. At the beginning of 2017, Kirakosyan left the CDU – and joined the SPD in the same year.

career in the new party

Surprisingly, nobody in the CDU seemed to be suspicious when she later ran for the Social Democrats under the name Gayane Kirakosyan – only the speed of her rise there caused astonishment. The parliamentary manager of the CDU parliamentary group stated that Kirakosyan “landed on a very good list for the state elections, which was promising. She landed in front of experienced state parliamentarians and experienced local politicians, so there must have been support from Ms. Schwesig.” Without this support, according to Ehlers, the good SPD list position would not have been possible.

There is no written statement from the SPD state chairwoman Schwesig on the Kirakosyan case. She “is still in the recovery phase after a major surgical procedure,” said Steffen Wehner, the state manager of the Social Democrats. Kirakosyan’s statements on social media are “strange”, according to Wehner. But she is still a member of the SPD.

A source in the SPD had the NDR said that Schwesig “held her hand over Kirakosyan” and personally brought her into the party. SPD state manager Wehner explained: “According to her own statement, Ms. Kirakosjan spoke to Ms. Schwesig on the sidelines of a public event and said that she was considering joining the SPD. According to Ms. Kirakosjan, Ms. Schwesig encouraged her in this context to join engage.” Own findings on this are not available.

SPD goes at a distance

Nobody in the SPD really knows anything about the mysterious woman. Not even whether Kirakosyan really has a doctorate. SPD state manager Wehner said that no title was given on the election documents that she submitted. SPD politicians such as State Interior Minister Christian Schwachen or Wismar member of the Bundestag Frank Junge are giving up NDR-Request to know Kirakosyan only remotely from party events. Level answers us in writing: “I don’t remember any in-depth contacts that allowed me to assess her personally.”

On a catalog of questions NDR Gayane Kirakosyan did not answer.