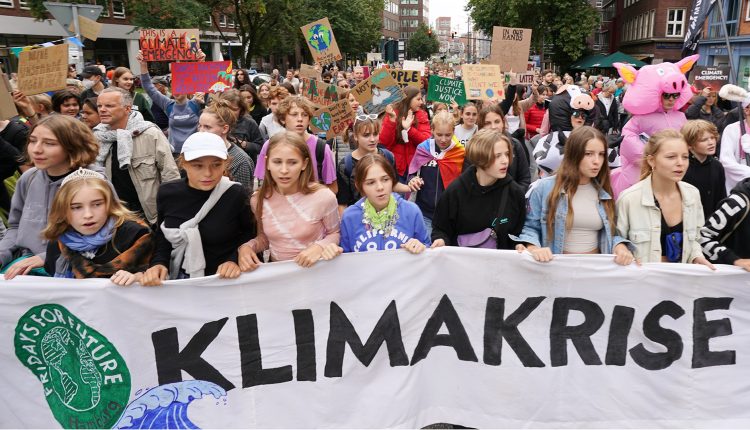 There are tipping points not only in the climate system, but also in climate protection. Scientists are researching whether street blockades or protests can be turning points in combating the climate crisis.

At some point, according to climate researcher Tim Lenton from the University of Exeter, he had enough of only delivering bad news. Because his actual field of research is and was the tipping elements of the climate. In other words, the critical limits of the earth system, the metaphorical overturning of which ensures that the climate often changes irreversibly, radically.

So Lenton began to think about how we as a society can deal with the complex threat of climate change. And how the powerlessness that some people feel in the face of the climate crisis can be transformed back into the ability to act.

Through his own great-grandaunt, he knew that even small groups can make a big difference. “She was in jail for being one of the famous suffragettes. She was jailed on suspicion of involvement in the Kew Gardens tea house fire.” It was also her arrest, her hunger strike and a relatively small group of women who finally changed society with their sometimes violent support for women’s suffrage. A tipping point with global implications.

So Lenton began to deal scientifically with the so-called social tipping points that could help solve the climate crisis. Such elements existed in the past, he noted. The pop band a-ha made a significant contribution to the fact that electric cars quickly became popular in Norway and now have a 90 percent market share. Simply by working with other well-known people to draw media attention to existing licensing and infrastructure problems, which were quickly resolved as a result.

Small changes in taxation and subsidies in the electricity market in the UK meant that coal-fired power was no longer viable there. They started a whole cascade. “Then we’re at an irreversible tipping point and there’s no way the UK will go back to burning coal. Luckily we’re rid of it.”

Education and financial market as fields

One of the first to deal with the social tipping points in the climate crisis is the social scientist Ilona Otto from the University of Graz. She surveyed in 2020 for a study in the journal PNAS Experts on such possible tipping points. “The question was: What could such elements be? And is it even possible to achieve climate neutrality in the next few years? It was very positive that almost all the experts interviewed thought it was possible.”

The experts proposed interventions in different areas. For example in the financial system, so investing in fossil fuel projects is no longer worthwhile. In cities, by promoting climate-friendly construction there. Or in the education system, by integrating climate-conscious lifestyles into the curriculum at schools.

In addition, according to Otto, the years following the study showed that the areas of “health” and “advertising” also had the potential to change society with little effort. Because the corona pandemic has shown how important their health is to many people. If the serious health consequences of the climate crisis were emphasized more in communication, this could have an impact. And an advertising ban for products that use fossil fuels could also lead to a rethink.

FFF and last generation as a trigger?

Newer protest movements also have the potential to become a tipping point, says Otto. In their study, the “Fridays for Future” movement is also explicitly mentioned under the heading of education. The initiatives “Lützi Stays” or “The Last Generation” could, in her opinion, lead to a large-scale rethinking. Especially when the generation of today’s young people come from school, training and studies in positions with more decision-making power. Because it is precisely these young people who support the protests for the most part.

“I support the climate activists,” says Otto. New methods are needed to exert more pressure on politicians. She believes that an effect can already be seen – a lot has happened in the past few weeks.