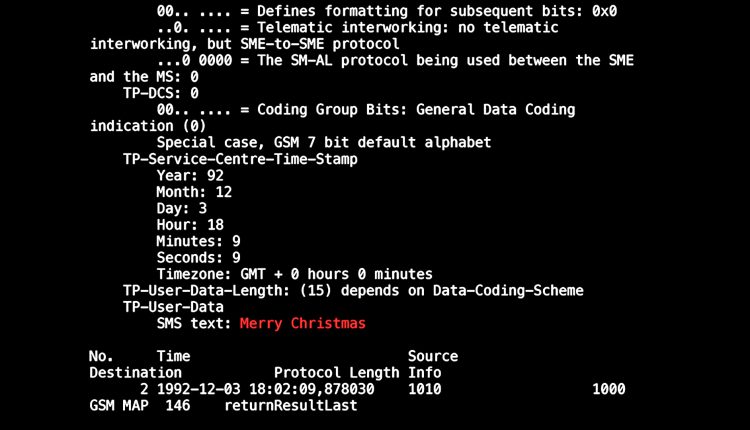 It all started with a Christmas greeting. This became a huge success story. SMS, the mobile short message, is celebrating its 30th birthday today.

“Merry Christmas” was in the first SMS. It was sent from a computer to Vodafone employee Richard Jarvis on December 3, 1992. Three years later, the SMS was officially launched. “However, it only really caught on as a means of communication in the late 1990s, when mobile phones became cheaper, the prices for mobile phone services fell and the first SMS flat rates came onto the market,” remembers Tanja Richter, Technical Director at Vodafone.

The first official figure from the Federal Network Agency, which was then still the regulatory authority for telecommunications and post, comes from 1996. At that time, 41 million SMS were written throughout the year. From 1998 things went uphill, reports the managing director of the Association for Telecommunications and Value-Added Services (VATM), Frederic Ufer. In the year 2000 it was already 14.8 billion. 2012 was the absolute record year. “Here the Germans sent almost 60 billion SMS.”

But the SMS has meanwhile got fierce competition. Messenger services such as WhatsApp or Telegram have now outstripped it. You can also send photos or videos there.

Accordingly, the use of SMS has fallen sharply. In 2021, the Federal Network Agency reports 7.8 billion SMS, which corresponds to around 13 percent of the record year. After all, usage has increased again compared to previous years.

Torsten Gerpott, who as a university professor heads the chair for corporate and technology planning at the Mercator School of Management at the University of Duisburg-Essen, speaks of an ingenious accidental discovery. The transmission capacities used for short messages were actually a technical reserve buffer. But they have developed much more strongly in the market than previously thought.

The SMS was a very useful, contemporary supplement to verbal communication. “Language is very direct, you have to answer questions, you can reflect on the writing or use emojis, so you have means that you cannot use in the language. The limit of 160 characters was initially a technical limitation that you had accepted,” says Gerpott.

In 2004, “texting” was included in the Duden dictionary, and in 2011 the abbreviation LOL (English: Laugh Out Loud) made it into the Oxford Dictionary. A year ago, the first SMS with her happy Christmas message was auctioned off for a good cause. The short message offered as a so-called non-fungible token, NFT for short, achieved a price of 107,000 euros.

SMS will be preserved

“Even if SMS no longer exudes the charm of years gone by, it will probably stay with us for a long time to come,” Vodafone technology boss Richter is certain. “SMS will be with us in the cosmos of short messages for many years to come. It is simply too simple and is still indispensable, especially for dual authentication of access to online services or as a notification service for mailbox messages.”

VATM boss Ufer sees other good reasons for using SMS. “SMS can be used as a network service independently of apps. In principle, the protection of private data can thus be guaranteed even better. The standard works on every mobile phone, does not require an Internet connection and no separate registration,” says Ufer.

In contrast to messenger services, you cannot see the online status with SMS, nor is there any information as to whether a message has been read. The switch from SMS to news services is also partly a farewell to privacy.