Situation of the energy suppliers: Habeck sees the danger of a domino effect 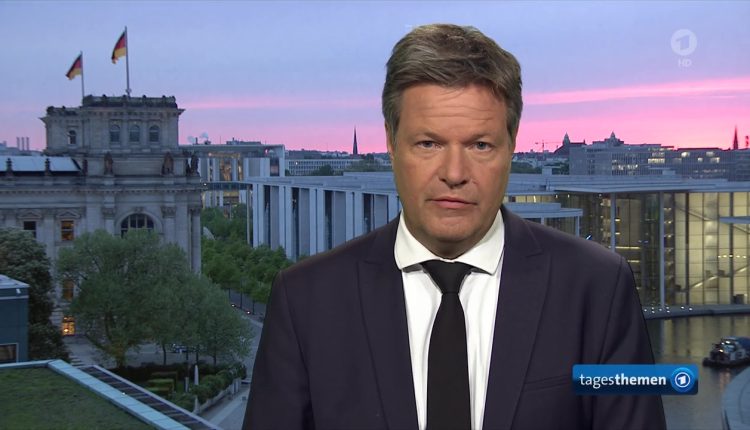 Economics Minister Habeck has in the daily topics warned of the consequences if energy suppliers are no longer able to buy gas. Such a failure must be prevented – otherwise there is a risk of a severe recession.

Gas is becoming scarce in Germany. So close that Economics Minister Robert Habeck declared the second stage of the crisis in the gas emergency plan. The appeal went to consumers and industry to now save energy. In an interview with the daily topics Habeck said that he nonetheless sees a high risk “that energy suppliers may find themselves in an economic situation where they can no longer raise money on the market to buy gas”.

Accordingly, it must be prevented “that they fall out of the market”. Habeck fears “a kind of Lehman Brothers effect in the energy market”. This would then also affect municipal utilities, commercial and industrial companies and consumers. “And then you have a domino effect that would lead to a severe recession,” said the Federal Minister of Economics. To prevent that, he will take care of it.

Habeck again put in the daily topics clear “that gas is a scarce commodity”. The bitter news is that the heating cost increases will come in these days. Habeck sees this as “the actual social challenge”, which, moreover, “is unavoidable, regardless of how high the price will be.”

Relief must be created for those who are driven into need and misery by these burdens. However, the Minister of Economic Affairs did not become specific. He has his own ideas, but he doesn’t want to present them just yet, so as not to let them “break” him, he said.

Economics Minister Habeck declared the alarm level in the gas emergency plan on Thursday. It is the second of three escalation levels of the contingency plan presented after the Russian attack on Ukraine. According to the plan, the alert level indicates a gas supply disruption or exceptionally high demand for gas, leading to a significant deterioration in the gas supply situation. However, the market is still able to handle this disruption or demand.

Unlike the early warning level that has been in effect since March 30, the alert level could have significant consequences for businesses and consumers. However, the government wants to refrain from state intervention for the time being. It initially does not activate the statutory price adjustment clause created in May. This would allow suppliers to pass on high purchase prices for natural gas directly to their customers, even with long-term contracts. This is intended to prevent a wave of bankruptcies among utilities.

Söder sees the risk of a gas emergency

Voices were raised from the Union that more efforts to secure the local energy supply are necessary due to the escalating gas crisis. “There is a threat of an existential gas emergency,” said Bavarian Prime Minister Markus Söder when visiting a gas storage facility in the Munich area.

The proclamation of the gas alert comes “hopefully not too late” and shows that all efforts to find substitute suppliers have not worked. “It is a sign that the situation is much more serious than expected.”

Parts of the industry are also skeptical. In the opinion of the energy company Uniper, the proclamation of the Economics Minister may not be enough. “It is important that with the so-called alert level, clarity is created very quickly as to what costs are incurred as a result of the currently tense supply situation,” said CEO Klaus-Dieter Maubach.

It is also clear that this is not a solution for this winter if the supply situation remains the same or if it continues to worsen over the coming weeks. The world’s largest chemical company, BASF, is preparing for significantly higher prices. The company expects gas prices to “rise massively because suppliers are buying more gas,” a spokeswoman for the Reuters news agency said.

“BASF is monitoring the situation and will decide, depending on the situation, which adjustments may have to be made in the production value chains.” At present, all of BASF’s European sites are supplied with natural gas according to demand.

The Federal Association of Consumers sees high costs for households. “We need a third relief package, in particular the heating cost subsidy must be increased,” said Thomas Engelke, energy expert at the consumer center, in the BAyerian radio.

The suppliers have already increased the tariffs for consumers significantly, he said. A three-person household with an average natural gas consumption of 20,000 kilowatt hours must expect additional costs of 1,000 to 2,000 euros for this year.