Situation in Kharkiv: “Many wounded in the city” 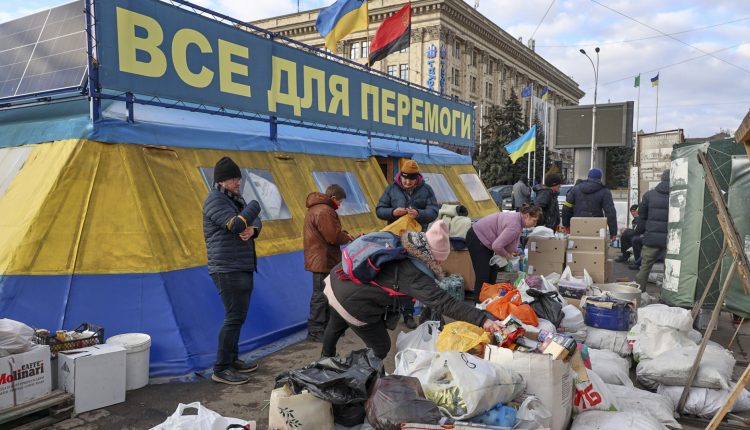 Food is becoming scarce in the fiercely contested second largest Ukrainian city. A political scientist with close contacts reports on the dramatic situation there. She says: Russia wants to expand the invasion from Kharkiv.

tagesschau.de: How is the situation in Kharkiv at the moment?

Julia Bidenko: I’m out of town now, but my mother is still in the center. With both phone lines and internet working, I am in constant contact with her, local journalists and volunteers. Kharkiv has been shelled since the first day of the war, even though last night was relatively calm. Many people left the city by train or sought shelter in bunkers. And there are also problems with the food supply.

tagesschau.de: Pictures from photojournalists have shown long queues in front of grocery stores and pharmacies in the past few days. Is this a mass phenomenon?

Bidenko: Not everyone can walk to the supermarket: the government has ordered civilians to stay indoors in the face of the shelling. Not all grocery stores are open, some only open for a few hours in the morning. My mother is 68 years old and can’t just stand in line. Most people still have basic groceries at home, but there is hardly any bread – and no flour to bake it either.

Hardly any international help so far

tagesschau.de: Is help on the way?

Bidenko: So far I don’t see any international organizations in the city helping with the supply crisis – only the Red Cross, but they have so far focused on medical support. I’m trying to get a supply from Poltava (About 150 km southwest of Kharkiv, editor’s note) to organize, which is still safe at the moment. For this I brought together business people, bakeries and volunteers. Volunteers have now loaded two buses with bread and set off from there for Kharkiv. Other volunteers from Kharkiv who have armed themselves then want to take over the vehicles. But that’s nothing compared to the need that exists right now.

tagesschau.de: Are you still missing other goods?

Bidenko: Fuel. Even if you have a car, you can’t get anywhere at the moment. This makes the logistics of distributing goods more difficult. And in our city of 1.5 million, the metro hasn’t run since it was converted into a bunker. I suspect that around 50,000 people have taken shelter in subway stations – more can hardly fit there.

In a way, they are better off because the city government keeps giving out food there. It’s more difficult on the outskirts, because the small supermarkets are closed, larger branches are far away – and Kharkiv is being bombarded with rocket launchers from Russia and with planes from the air. A colleague from the Department of Political Science is now sitting at home with her seven-year-old daughter – and they have no supplies.

tagesschau.de: What about medical care?

Bidenko: Regional hospitals are still operating at the moment – I know from nurses that staff there have tried to operate in the dark at night to avoid being targeted by shelling. Blood from Poltava could be brought to Kharkiv yesterday, but our clinics urgently need more donor blood and medicines. Because right now there are many wounded in the city; both civilians and soldiers. In the first two days of the war, long queues formed in front of the blood donation center – but on Friday it was hit and damaged.

tagesschau.de: Over the weekend, we received reports that Kharkiv had been occupied by Russian troops but was then recaptured by Ukraine. Do you have an overview of the military situation?

Bidenko: At the weekend, Russian troops with tanks tried to advance into the city center – but the Ukrainian military with troops for national defense and the national police repelled the invasion together. The civilian population of Kharkiv helped in this. Many civilians took photos of Russian soldiers and vehicles and their locations, which they sent to the military.

Volchansk and Kupjansk, two villages in the surrounding area, were conquered by Russian troops. In some villages in the outskirts of Kharkiv, civilians stopped Russian columns – the soldiers were captured and now there are many videos in which they say: “I didn’t know that this wasn’t a maneuver” or that they didn’t realize that the citizens of Kharkiv are not longingly waiting for them. Surely these soldiers are trained in how to respond in such situations – and certainly willing to say anything to save their lives.

In the current situation, information on the course of the war, shelling and casualties provided by official bodies of the Russian and Ukrainian conflict parties cannot be directly checked by an independent body.

Kharkiv as a strategic base?

tagesschau.de: Why did the situation get so critical in Kharkiv of all places?

Bidenko: Russia is trying to use the city for their other military goals. In the first days of the war, Russian troops bombed all of Ukraine’s military airports, but hardly attacked Kharkiv airport. I think they want to use the airport to land here and expand the invasion.

It’s ironic: Kharkiv’s mayor Ihor Terekhov speaks Russian (Like about two-thirds of the city’s population, editor’s note) and has pretty much ignored the law promoting Ukrainian in everyday life. But now he’s very patriotic, staying in town and struggling to keep water and district heating running.

As a political scientist, it doesn’t surprise me that Ukrainian society is very closely networked – but I’m also surprised to see how everyone is now standing together against Putin.