Scholz in Skopje and Sofia: Mediation in a permanent dispute? 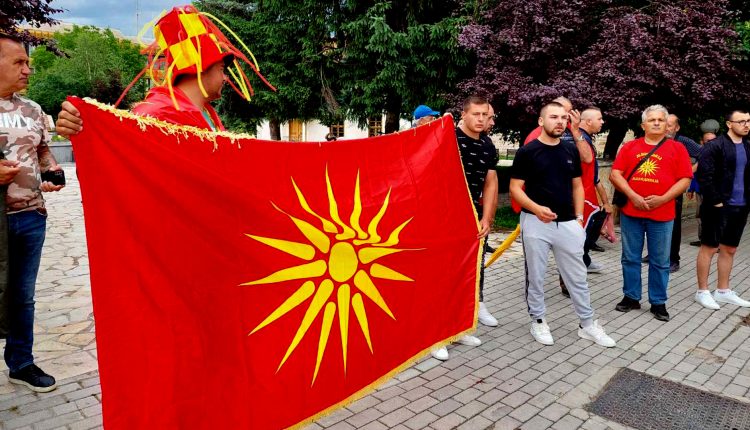 North Macedonia has been stuck in the role of EU aspirant for years. Neighboring Bulgaria is blocking the admission. The occasion is the dispute over a common history. Can Chancellor Scholz solve the blockade?

A demonstration in Bitola, the third largest city in North Macedonia. It’s about the Bulgarian cultural center, whose door is completely charred after an arson attack. Around 300 people have gathered in front of the police headquarters. They responded to an appeal by the left-wing opposition party “Levica” and demanded that the man arrested for the arson attack be released.

It is the well-known North Macedonian singer Lambe Alabakovski, who is said to have already confessed to the crime. Many of the demonstrators consider the arson attack on the cultural center to be justified, including this man: it was opened illegally without the consent of the state. “It’s all a deliberate provocation to cause revolt and dissatisfaction,” he says.

“We fear for our safety”

The stumbling block is the namesake of the cultural center. It is named after Ivan Mihailov – a controversial figure of common history. Mihailov is revered by many as a hero in Bulgaria, but seen as a Nazi collaborator in North Macedonia.

Ljupco Goergievski from Bitola accuses the government in Skopje of wrongly branding Mihailov as a fascist and of having instigated a veritable campaign on social networks aimed at the Bulgarian minority to which he belongs: “We fear for our safety here . We are afraid for our families and our children,” he says. On the street, they would keep looking around out of caution. “Now they’ve set us on fire, who knows what they’ll do tomorrow.”

The dispute over the cultural center in Bitola is the latest episode in the so-called historical dispute between EU country Bulgaria and EU aspirant North Macedonia. Since 2020, Bulgaria has insisted that it will only give the green light for North Macedonia’s admission to the European Union if the neighboring country implements a 2017 friendship and neighborhood treaty, thereby abandoning its “anti-Bulgarian ideology”.

The accusation is that North Macedonia has appropriated parts of Bulgaria’s history and is thus “stealing history”. The North Macedonians read this as a request to admit that they do not actually exist as a people and are actually from Bulgaria. A dispute that does not progress despite numerous attempts to mediate.

“We’ve tried everything in our power for the last two years,” says Anke Holstein, Germany’s ambassador in Skopje. The Federal Republic is of the opinion that disputes between two states should have no place in the EU expansion process, says the diplomat.

Chancellor Olaf Scholz now wants to work in the capitals of Skopje and Sofia to ensure that North Macedonia gets the OK for accession negotiations at the European Council meeting on June 23. A difficult mission, especially since Bulgaria is in the middle of a government crisis. The trigger is the dispute with North Macedonia.

“Won’t do anything under pressure”

The head of the populist party “There is such a people”, Slavi Trifonov, withdrew his ministers from the government and ended the coalition. He accuses Prime Minister Kiril Petkov and his party “We are continuing the change” of wanting to lift the Bulgarian veto against North Macedonia’s admission to the EU – under pressure from Brussels.

Petkov, who is now striving for a minority government, disagrees: “We will not do anything under pressure. That must be clear to the entire Bulgarian people. We are currently examining whether Bulgaria’s wishes and needs for support for the Bulgarians in North Macedonia can be guaranteed by the EU. “

For many in North Macedonia, the Bulgarian blockade is like déjà vu. For decades, Greece blocked the neighboring country’s NATO and EU ambitions over a name dispute. North Macedonia eventually changed its country name and its constitution.

It joined the alliance two years ago, but rapprochement with the EU is faltering. This man, demonstrating in front of the police headquarters in Bitola, says what many in the country are thinking: “If Europe is what it claims to be, then it must not keep us waiting at the gate. Europe must realize that we, too, are citizens of Europe are.”

Scholz in North Macedonia and Bulgaria: A difficult mission

Where saving energy in the household is most worthwhile