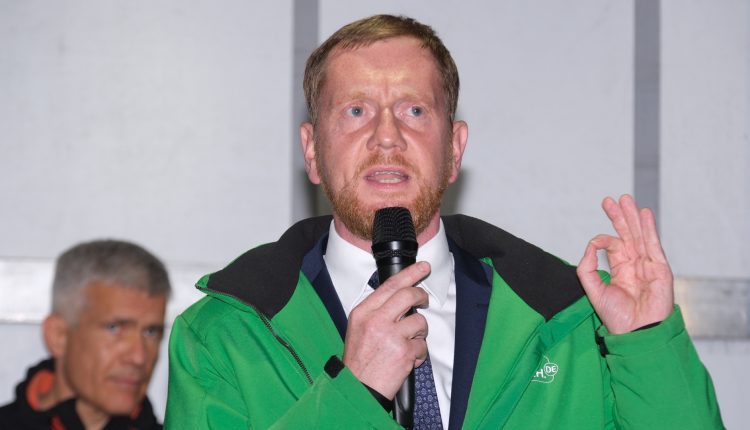 Saxony’s Prime Minister Kretschmer is promoting diplomacy with Russia and has long been irritating his own party. He can’t score points with pro-Russian protests either. What is he up to?

Saxony’s Prime Minister Michael Kretschmer has spoken out in favor of a “freezing” of the Russian war in Ukraine, he is promoting negotiations with Moscow and wants to start importing gas from Russia again soon.

With regard to East German peculiarities, the CDU politician explained: Germany must accept “different points of view”. This causes fierce opposition in the traffic light coalition, partly also in the CDU. What is Kretschmer’s calculus?

The Green foreign politician Anton Hofreiter criticized Kretschmer’s recent statements on the hoped-for resumption of Russian gas supplies through the Baltic Sea pipeline as “populist and irresponsible”. SPD leader Saskia Esken made it clear that even after the war they did not want any new energy dependency on Russia. And the FDP defense politician Marie-Agnes Strack-Zimmermann accused Kretschmer of treading dangerous ground. The future of Russian gas is done and “Mr. Kretschmer really took a completely wrong turn”.

Clear words from the ranks of political opponents, but not only: In their own ranks, the Saxon CDU member of the Bundestag Marco Wanderwitz was the clearest. He launched a sweeping attack back in September: Kretschmer acts like a wrong-way driver who believes everyone else is driving in the wrong direction.

CDU party leader Friedrich Merz explained that Kretschmer’s position was not that of the federal party. In eastern Germany there is a “somewhat naive attitude towards Russia”. But there is no clear demarcation of the federal CDU from Kretschmer. Secretary General Mario Czaja wanted to get on MDR– Currently do not comment on the topic.

Kretschmer receives support from the Saxony CDU. Their Secretary General Alexander Dierks shared this MDR with, the national association stands by the fact that Kretschmer does not give up opposite the traffic light.

The CDU in the west-east balancing act

The political scientist Hans Vorländer from the TU Dresden says it is understandable that Kretschmer “wants a secure energy supply for domestic industry and the population”, as well as a diversification of energy suppliers. That “may also include Russia after the end of the war,” said Vorländer in an interview with the MDR.

However, Vorländer considers Kretschmer’s statement about the “freezing” of the war to be irrelevant. She doesn’t take into account “that Russia wants to wipe out Ukraine and that there are genocidal tendencies in Russian war policy.” In addition, it is up to Ukraine to declare the end of the war. Vorländer explains: “What Kretschmer is doing here is packaging a requirement for a sensitive East German audience in a way that is appropriate for the addressee.”

Citizen dialogue as a field test?

But how does Kretschmer’s “Eastern populism” go down with voters? You can see that in public appearances and meetings, where Kretschmer also seeks dialogue with opponents. Kretschmer positions himself against the traffic light federal government with ideas that usually come from the extreme right such as AfD or from left-wing politicians like Sahra Wagenknecht – such as the proposal to restart the Nord Stream 1 gas pipeline.

At a demonstration against high energy prices in mid-October in Grimma, Saxony, Kretschmer set different priorities. He campaigned for solidarity with Ukraine and clearly named Russia as an “aggressor”. At the same time, he criticized the right-wing extremists “Free Saxony”, whose representatives among the demonstrators booed him.

For the democracy researcher Vorländer, these statements, which differ depending on the occasion, are a sign of fickleness and political opportunism. The Prime Minister’s policy lacks a “clear and coherent line”. Vorländer sees behind the actions of the Saxon prime minister a “populist method” that around two-thirds in the East have gotten behind the sanctions against Russia if it is disadvantageous for them.

Surveys initially agree with Kretschmer, and his popularity is increasing again. However, according to Vorländer, experience shows that people tend to vote for the original of the radical and extremist right in elections.

“This war must be stopped”

To the question of MDRWhat Kretschmer’s position on the Russian war of aggression against Ukraine is and what German energy policy he wants in the future, his spokesman replied: “A joint diplomatic effort is now needed by the EU, the USA, China, India and Japan. This war must be stopped. ” These questions should no longer be clarified on the battlefield. “Europe must put more pressure on peace talks.”

At the same time, it is made clear: “There is not a single reason why Ukraine should give up even one square meter of its territory. War damage must be compensated by Russia, war criminals must be held accountable. You have to approach peace talks with this attitude.”

For the future German energy policy, Kretschmer is therefore relying on long-term liquid gas supplies from the USA, Arab countries and its own North Sea natural gas. When the war is over, “we should use gas from Russia again. That’s only possible with functioning pipelines.”

Kretschmer sees his concept of civil dialogue as a prophylaxis against extremism. Many people are confused and are looking for answers. There are also extremists who only want to destroy. A democracy needs places “where people’s concerns can be articulated. However, a demonstration is not the place where you can explain everything. But listening and giving the signal that your concerns are being heard is important.”