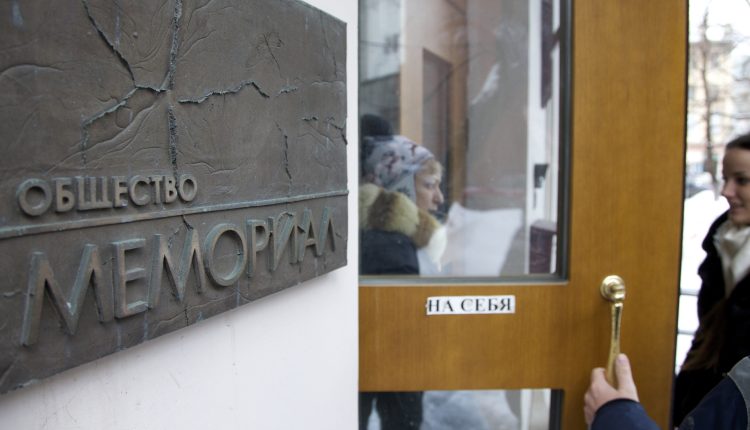 A few hours after the announcement of Memorial’s Nobel Peace Prize, a Russian court ordered the organization’s Moscow offices to be confiscated. The human rights activists still want to continue working.

The Russian human rights organization Memorial, which won the Nobel Peace Prize, is now also losing its headquarters in Moscow following its dissolution. A court in the Russian capital awarded the building to the Russian state in proceedings criticized as being politically motivated.

A prosecutor accused Memorial in court of “rehabilitating Nazi criminals, discrediting authorities and creating a false image of the Soviet Union.”

Human rights activists don’t give up

“We are grateful to the Nobel Committee for this honorable award,” said Memorial members in the evening after hours of wrangling with the Russian judiciary. In addition to the organization, the Nobel Committee also awarded the prize to the Belarusian human rights lawyer Ales Byaljazki and the Ukrainian Center for Civil Liberties.

Despite the recent decision, the work should continue “under all circumstances” along the lines of founding father Andrei Sakharov, Memorial said. The physicist Sakharov, also known as the inventor of the Soviet hydrogen bomb, received the Nobel Peace Prize in 1975.

“Memorial’s idea and mission are people, history, help for the victims of repression, the fight against state violence,” the statement said. “Memorial – it’s a network, it’s people, it’s a movement.” Work is ongoing in Russia and Ukraine, as well as in other countries.

Like other Russian civil rights organizations, Memorial is currently experiencing “strong pressure”. “But it is not possible to ban memory and freedom.”

Memorial is thinking of Byalyatsky in Belarus, as well as other political prisoners in the country and colleagues working in Ukraine under the conditions of Russian war of aggression. The Nobel Peace Prize comes at a time when Russia is waging a war of conquest in Ukraine and is destroying rights and freedoms in its own country. That is a danger to the world.

Memorial co-founder Irina Scherbakova sees the award as an important signal for people in Russia who are critical of the Putin regime and the Ukraine war. The Nobel Committee’s decision was a happy event for many of them, she said in Jena. Because many people in Russia are afraid of massive repression and police violence.

But there will be a time after President Putin, stressed Scherbakova. “I very much hope that Russia will eventually find a way out of this moral, political catastrophe and into democracy and freedom.”

The historian and Germanist Scherbakowa holds a visiting professorship at the University of Jena and lives in Weimar.