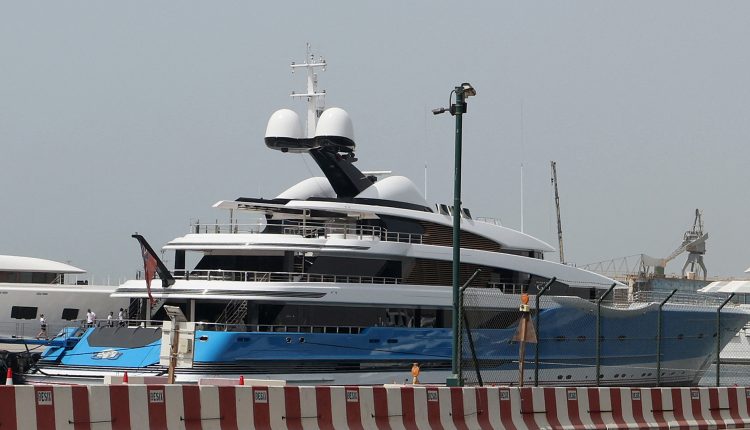 Despite the war, Russian oligarchs are welcome in the United Arab Emirates: They don’t have to fear sanctions, the airspace is open – you can pay as you please.

It is the objects of the absolute luxury class that are now selling for record prices: eight bedrooms, terrace with sea views, garden, swimming pool. According to real estate agent Kas Syed, there are only five or six such villas left on the market in prime locations in Dubai, such as the artificial island of Palm Jumeirah. Russian investors, in particular, took hold on a large scale.

Since Russia attacked Ukraine, luxury real estate in the glittering metropolis of the United Arab Emirates has risen in price by around 50 percent, some even by 100 percent. Just recently, an investor shelled out 70 million euros for an opulent villa. “The problem isn’t demand, it’s supply,” says Kas Syed. “It’s very limited, which obviously has an impact on prices.”

Russians are apparently investing massively in real estate in Dubai

The Emirates have long been considered a safe haven for money from dubious sources. The federal government has tightened the rules on money laundering in recent years. In practice, however, the loopholes seem numerous and controls rare.

Broker Kas Syed accepts pretty much any form of payment imaginable: “You can pay in any currency you want: dirhams, dollars, cryptocurrency, online transfers. You can also send pigeons. We accept it.” This is probably one of the reasons why the Emirates ended up on the “grey list” of the anti-money laundering organization FATF in March.

Now Dubai is experiencing a boom: oligarchs close to Kremlin chief Vladimir Putin are welcome in the Emirates as long as they have the wherewithal. In just a few weeks they are said to have invested almost 300 million euros in Dubai. Syed’s colleague Jennifer Soltanpour promises absolute discretion: “Dubai doesn’t ask any questions. Everyone is welcome. Nobody has to be afraid of anything. It’s open to everyone.”

Close ties between the Emirates and Russia

In the West, the accounts of Russian oligarchs are being frozen, villas and yachts are being confiscated. Such sanctions do not apply in the Emirates: here you can go on a shopping spree without worrying, the airspace is open to Russian jets. If you buy a property for 1.4 million, you get a five-year visa.

Economically, the Emirates and Russia are closely intertwined. The confederation of states has invested around three billion euros in Russia. The two also cooperate closely in the energy sector. This is probably one of the reasons why the Emirates are neutral in the war against Ukraine and did not want to condemn Russia’s aggressive war in the UN Security Council.

This opens up unprecedented opportunities for brokers like Kas Syed. His phone hasn’t been silent for weeks. A good third more inquiries reached him. In the office they work at the limit. But the onslaught is still manageable.

Irina Ustina came to Dubai from Moscow two months ago and decided to stay. The 33-year-old entrepreneur is one of around 40,000 Russians in the Emirates. Soon there will be many more.

Now she is looking for promising investment opportunities in her new home. Kas Syed is at her side, escorting her to the marina, leading her onto an elegant ship. In addition to real estate, another playing field for wealthy investors.

“Yachts abound. Anything from 6m to 25m is available and can be bought anywhere,” says Syed.

The value of the yacht “Titan” of the Russian billionaire Abramov is estimated at 100 million euros – in early April she anchored in the port of Dubai.

Ustina wants to explore the market first and keeps a low profile: “The Emirates are a rich country with many opportunities. You can do business, enjoy the sun, the sea, palm trees, the beautiful view. A lot of people really like this country.”

Very few Russians in Dubai want to talk to journalists, especially not the super-rich. In the street scene, however, they are definitely present and courted by financial advisors and brokers. After the lean years of the corona crisis, Kas Syed is now expecting brilliant business again – in the slipstream of a dirty war.

What is in the Dubai land register

More than 5000 citizens of Russian Federation own more than 9700 properties like villas and luxury apartments in Dubai. This is reported by the “Süddeutsche Zeitung”, citing an image of the Dubai land register as of the beginning of 2020. Among them are around 100 members of Russia’s political elite, officials, business people close to the Kremlin and their family members, members of the Duma and others Politicians sanctioned by the EU, USA and Great Britain. According to the report, the investments could have saved their money from impending sanctions even then. So far, Dubai has not joined the international sanctions against wealthy Russians.

Dubai is booming thanks to money from Russian oligarchs