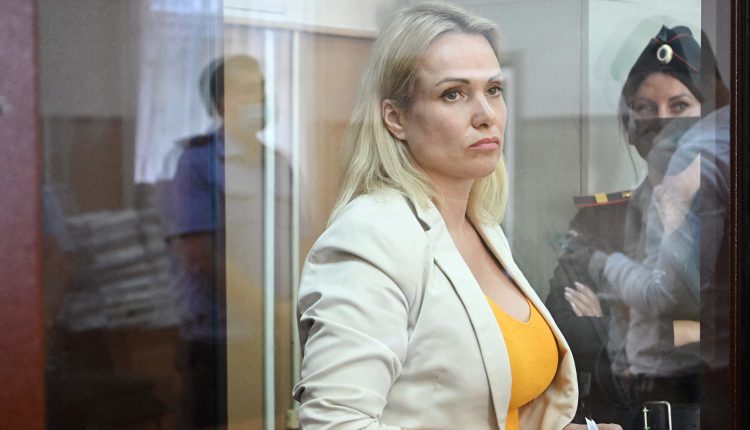 She became known when she protested against the Ukraine war on state TV. Now the Russian journalist Owsjannikova has been placed under house arrest. The indictment accuses her of spreading false information.

Former Russian TV journalist Marina Ovzyannikova has been placed under house arrest until October 9 for criticizing Russia’s war against Ukraine. That was decided by a court in Moscow, as reported by Russian agencies.

The arrest is part of a criminal case in which the 44-year-old is charged with allegedly spreading false information about the Russian armed forces. According to the Interfax agency, she faces between five and ten years in prison.

Street protest: “Putin is a murderer”

The journalist on the First Channel of Russian state television, who had previously been considered loyal to the line, held an anti-war poster into the camera in a news program in mid-March. After that she stayed abroad for a few months and worked for the German newspaper “Die Welt”.

In mid-July, within sight of the Kremlin, they again protested against the war. At the street protest, she held a banner that read: “(Russian President Vladimir) Putin is a murderer, his soldiers are fascists. 352 children have been killed (in Ukraine). How many more children should die for you to stop ?”

The government-critical Russian journalist protested against the Ukraine war. Her attorney said she “sees what’s going on, and it makes her speak her mind.”

Lawyer: “hostage to her own conscience”

Ovsyannikova used the hearing on Thursday for another protest. She appeared in the courtroom with a poster that read, “Let the murdered children come to you in your dreams at night.”

Her lawyer, Dmitry Zakvatov, said after the hearing: “You see, Marina has become a hostage to her own conscience and a hostage to her love for her children.” She cannot go abroad because her children are here in Russia, “and she cannot be silent here because she is a prisoner of her conscience. As a mother, she cannot be silent. She sees what is going on and it brings them to speak their mind.”

In Russia, the war against Ukraine can only be described as a special military operation. The penalties for criticizing Moscow’s actions were tightened in an urgent procedure in March. So far, only comparatively small fines have been imposed on Ovsjannikova. She is mother of two children.