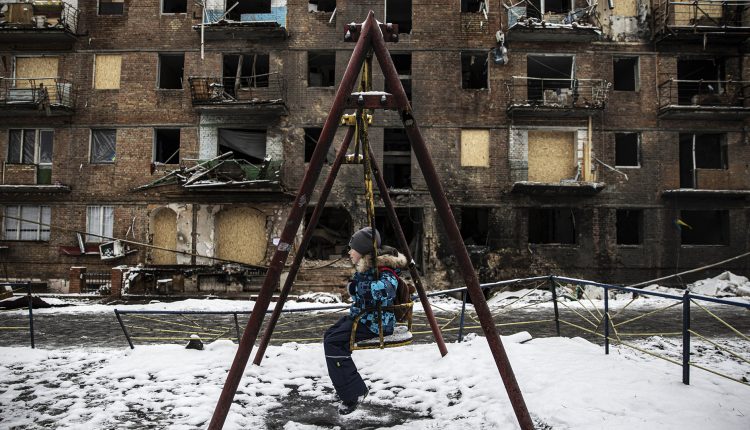 The first snow falls, the temperatures drop below zero. Meanwhile, Russian troops continue to shell Ukrainian cities. How will winter affect the lives of the population and the progress of the war?

The Russian army has massively damaged Ukraine’s energy supply. In freezing temperatures, many households are temporarily or even completely without heating, electricity and water. Moscow justifies this by saying that the infrastructure is used by the Ukrainian military. Meanwhile, winter is just around the corner. How will the power shortage and the cold affect further development? An overview.

How is the energy situation?

After the series of Russian rocket attacks on the power grid, Ukraine is struggling with massive power outages. Many households only get a maximum of eight hours of electricity a day. According to the network operator Ukrenerho, more than a quarter of the required amount of electricity is missing across the country and more than a third in Kyiv. Imports from the west cover a maximum of ten percent of the demand.

At the same time, Prime Minister Denys Schmyhal is trying to calm down: 14 billion cubic meters of natural gas and 1.3 million tons of coal in reserves are enough to supply the country with electricity and district heating. In any case, more than 50 percent of the electricity demand is covered by nuclear and hydroelectric power plants.

Can the country provide itself with food?

So far, the attacks have not led to supply gaps. Shops and markets are well stocked except for the areas near the front. However, due to unemployment and an inflation rate of 26.6 percent in October, fewer and fewer Ukrainians can afford groceries and other everyday necessities.

Low-income groups are particularly hard hit. The average pension of the approximately eleven million pensioners is the equivalent of 120 euros. However, the majority of them do not have to survive on more than 75 euros a month and are dependent on help from relatives or aid organizations.

Food distribution in Chernihiv. Especially in winter, many will be dependent on help from relatives or aid organizations.

Will there be another fuel crisis?

Because of the constant unpredictable power outages, Ukrainians make massive use of power generators. The government has stimulated imports with a duty exemption. In local transport, the trolleybuses and trams were replaced by diesel-powered buses. The railroad is increasingly using diesel locomotives.

As at the beginning of the war and in the spring, there were long queues at the gas stations again. The demand for petrol and diesel rose by more than 30 percent for a short time. The country, which is dependent on fuel imports, is again threatened with empty filling stations if there are new air strikes on the power grid. This should also have an impact on the general supply situation.

Is there a new wave of refugees?

In the hinterland, residents have already braced themselves for rocket attacks and power outages. At the front, no Russian breakthroughs are to be expected for the time being, which could trigger many people to flee again. However, should new Russian airstrikes lead to irreparable blackouts and heating failures, many Ukrainians could flee to the EU – especially if the current freezing weather in Ukraine lasts longer.

At the end of next week, temperatures are expected to rise significantly. The winters in recent years have also been quite mild, even in January and February. To this end, Kyiv has started to set up warm-up points in schools, kindergartens and large tents across the country, which have also been equipped with power generators and, in some cases, the Internet.

How can Ukraine supply the front?

Cold is the soldier’s enemy. Injuries and equipment failure will increase due to weather conditions alone. Supply is also more difficult: the soldiers need more food, more fuel, and warmer clothing than in summer. There were calls – also to the West – for the delivery of winter clothing and fuel. However, it is still unclear whether the preparation was sufficient.

In contrast to the muddy autumn, deep-frozen terrain at least offers the opportunity to supply the troops off the streets. However, large rail transports are restricted by Russian rocket attacks.

How does winter affect warfare?

In winter, the current operational hiatus will probably end with the fall mud. For the Ukraine, which relies on rapid advances, there are again better conditions to implement their tactics. While the Russians still have superior firepower, the Ukrainians are superior in maneuverability. However, it will be important which side has its soldiers and technology better equipped for the winter. Most observers see Ukraine ahead here.

Air strikes are intended to turn the Ukrainian population against the government: a woman takes a winter walk between anti-tank hedgehogs.

What good is Russia bombing the energy sector?

One cynical calculation of the air strikes is to turn the Ukrainian population against the government, which is also said to have an impact on the soldiers’ morale. The constant shelling also aims to weaken the resources of Ukraine’s air defenses, which have to concentrate on many points. In addition, the blackouts also create difficulties in supplying the army and moving troops. The train is partially paralyzed. The production of ammunition and war goods is also hampered.

However, during the war, the needs of the front take precedence. The few existing power capacities are reserved for facilities important to the war effort. The benefit of such a bombardment is therefore limited from a purely military point of view.