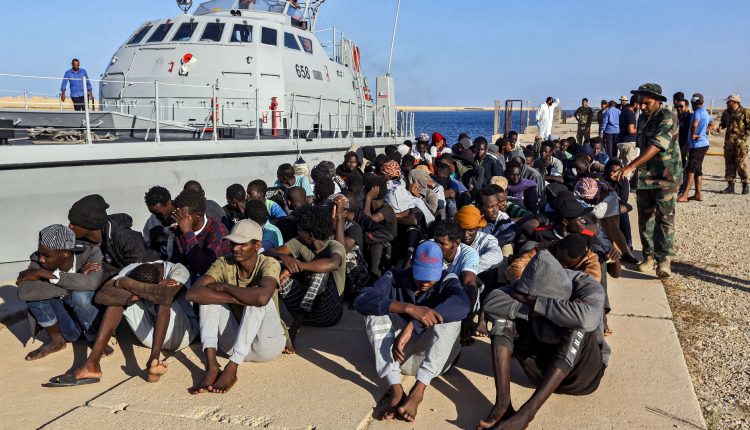 Drowned refugees in the Mediterranean, deportations to Libyan torture camps and a permanent breach of international law: the new federal government actually wanted to put an end to this. But that can monitor-Research out of the question.

These are hunting scenes that the sea rescuers from the “Sea-Watch” initiative regularly document from the air. The so-called Libyan Coast Guard is pursuing refugee boats trying to flee to Europe and escape the militias. But they don’t stand a chance and are intercepted and taken back to Libya, where they face torture and ill-treatment. Numerous video recordings of such interception actions are available to him ARD-Magazine monitor before, the youngest is from this week.

Ongoing breach of international law in the Mediterranean

According to the will of today’s Foreign Minister Annalena Baerbock, such actions should actually no longer take place. The Greens politician has repeatedly criticized cooperation with Libya in the Mediterranean in the past: “Europe is in danger of continuing to abandon its value system, because anyone who relies on being rejected on the high seas, transferring people to the Libyan coast guard, is breaking with the International law,” she criticized in June 2018, when the Greens were still in opposition.

A crucial point of criticism, especially Green politicians, was the establishment of a so-called SAR zone, a “search and rescue zone” that allowed Libyan militias to intercept refugee boats far off the coast of Europe and bring them back to Libya. For this purpose, the Libyan Coast Guard was supplied with ships and equipment by the EU and thus also by Germany.

In the coalition agreement, the traffic light coalition had also promised a change of course in this refugee policy: “We want to end the illegal refusals and the suffering at the external borders.” But obviously she doesn’t feel tied to it in the Mediterranean.

The promised change of course did not materialize

Green MPs criticize this: “The federal government also knows about the dramatic situation for which the Libyan coast guard is responsible,” says Max Lucks, Green MP and chairman of the Human Rights Committee. “That’s why I also expect the German government to work clearly and in various formats to ensure that the cooperation of the Libyan coast guard is not promoted in the way it has been done up to now.”

Felix Weiss from Sea-Watch has been documenting the controversial returns in the Libyan search and rescue zone from the air for years and making them public. He is appalled: “The promises made by the new federal government can only be described as lip service. That’s shameful, you’re just pursuing a policy here that has also been pursued in Germany for the last 16 years.”

Torture and violence against refugees in Libya

It has been known for years that refugees who are intercepted by the Libyan coast guard are taken to Libyan state detention camps. A recent report by a UN fact-finding mission in Libya at the end of June once again documented the most serious crimes. Accordingly, “murder, enforced disappearance, torture, enslavement, sexual violence and rape” occur in the state detention camps.

Nidal Jurdi, head of the UN fact-finding mission in Libya, and his team spent almost two years researching and conducting countless interviews with refugees. Now he is demanding consequences: “Any state or group of states that supports the institutions that are currently involved in widespread or systematic attacks on migrants support the perpetrators. This should be changed.”

Meeting of the Libyan Coast Guard with the Federal Police

However, the Libyans still appear to be a legitimate partner for German authorities. This was revealed at a meeting between the federal police and representatives of the Libyan Coast Guard in early July. It was just an exchange of information and getting to know each other, the federal police explained on request. However, the Libyans had nevertheless expressed a desire for better equipment.

One thing is clear: the Libyan Coast Guard is to be further upgraded by Europe. According to internal reports, the monitor are available, at least 200 million are said to flow to North Africa every year. The primary goals mentioned in an EU document are border protection and sea rescue in Libya. A so-called “action plan” for Libya clearly states that the Libyan coast guard and the Libyan maritime police are to be further expanded “so that they can carry out effective search and rescue operations.”

No criticism of upgrading the Coast Guard

When asked explicitly, the Foreign Ministry did not say a word of criticism of this upgrade of the Libyan coast guard. An interview with a representative of the Ministry is declined due to time constraints.

In June 2018, however, the current foreign minister made it clear: “You cannot cooperate with the Libyan coast guard, a regime, a terrorist regime, in whose camps people are tortured and raped, from where people are fleeing.” Obviously she sees things differently today.