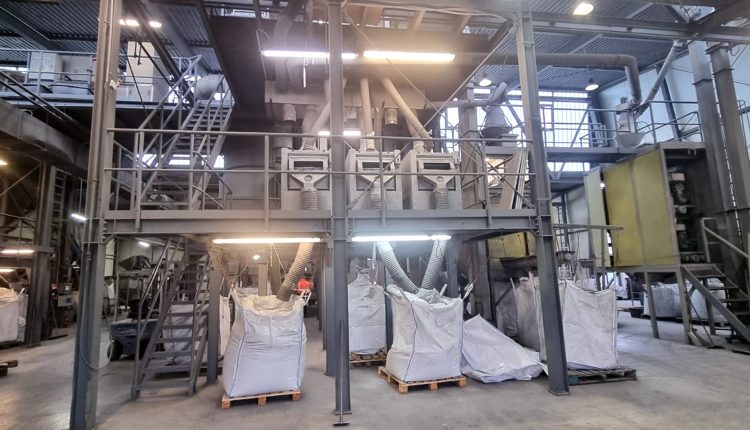 Recycling protects the environment and resources. But with the extremely increased energy costs, it is often hardly worth it. And even the government’s energy price cap cannot cushion everything. A site visit.

There is a mountain of colorful aluminum bottle caps on the company yard of the recycling company TKM in Landau. He is more than two meters high. “A truck has just unloaded it here. The crown caps are needed for the fermentation of champagne. Then they go to us for reprocessing,” says Reinhold Löhr. The manager walks across the yard and points to leftover aluminum and plastic bottle caps. “In total, at least 360 tons of material are delivered to us every month and then processed by us again.”

A blower pulls the last caps into silos, where aluminum and plastic parts are first separated from each other. The light metal is then blown into a large hall via pipes. There, the aluminum is screened in several plants, cleaned and finally ground into different sizes. At the end, the aluminum granules are weighed into huge 1.2 ton bags and can then be recycled. “The energy balance with our process is clear: Compared to the production of new aluminum, around 95 percent of the energy is saved,” Löhr sums up.

In times when environmental protection is becoming more and more important, the working atmosphere at TKM with its 15 employees should actually be excellent. But it’s not. The reason: The very high energy prices in Germany make recycling more and more unprofitable. “Until the end of last year, we had an electricity price of a good 12 cents per kilowatt hour with a long-term contract,” says Löhr.

However, a new contract with fixed prices can no longer be obtained for large amounts of electricity at a price acceptable to the company. The risk in the development of the energy markets is too great for the providers. “We now have to buy on the spot market, where the price changes every 15 minutes. I don’t even know the details of our current electricity price. It’s constantly changing,” says the clueless managing director. “So I can only speculate about our expenses, but no longer calculate.”

At the end of January, the electricity provider could give a first number for the month. Löhr pulls out a pen and piece of paper and does the math: “Up to now, a tonne of aluminum has cost us around 39 euros in electricity.” According to initial estimates, he now comes to around 58 euros in additional costs. “But that’s just an estimate.”

The federal government has promised companies with the energy price cap financial compensation. Doesn’t that help? Löhr shakes his head: “The calculation basis for the cap is 2021. At that time, like the entire industry, we had significantly lower production due to the corona lockdowns. The reference value is wrong,” says Löhr.

In addition, the implementing provisions of the law are contradictory and unclear from his point of view. “I’ve already received offers for training seminars on how the law can be applied to the respective company. So we’re not alone with our concerns.”

However, Löhr and his colleagues are concerned about one fundamental concern: the energy prices, which have been rising continuously for years, are also affecting his company more and more. “Germany is a resource-poor country. We should keep valuable materials in our own country.” Instead, iron or steel, for example, goes to countries outside the EU for reprocessing and then comes back as construction steel. “Recycling is becoming less and less worthwhile in this country.”

“I would wish that this was an isolated case. But unfortunately it isn’t,” says Sebastian Will when he hears about the problems at TKM in Landau. Will is Deputy President of the Federal Association for Secondary Materials and Disposal. Many companies are currently reporting to his office in Bonn and complaining about the high prices. “The entire industry is driven by cost increases. The energy sector stands out. We have an increase of up to 230 percent in electricity.”

Like TKM, many medium-sized companies have invested in recent years to cut spending and increase productivity. “One example is photovoltaic systems. But that can only reduce these energy costs. It’s hardly feasible from an economic point of view,” says Will.

Recycling protects the environment and resources – but with the high energy costs, it is sometimes hardly worth it.

The association is also concerned about the increasing bureaucracy. Medium-sized companies in particular are increasingly overwhelmed. “Laws and regulations, especially from the European Union, are gaining the upper hand.” Large companies have specialist departments for this. “Small businesses can no longer finance it,” Will complains.

“But green technologies and companies associated with them should be supported in view of the environmental challenges,” says Will. “But it’s getting harder and harder for the little ones.”

In Landau, Managing Director Löhr walks through the production hall and looks at the rattling machines. “The company has now been in existence for 29 years. We have constantly increased our energy efficiency and productivity. But we cannot absorb these massive additional costs.”

In addition to the high energy costs, the bureaucracy makes entrepreneurial activity more difficult. “We have been wanting to build another photovoltaic system for a long time. However, this has so far failed due to administrative regulations.” A good year ago he even approached the Federal Ministry of Economics in Berlin. “We should get an answer in May,” says Löhr.

And what are the prospects? “We are currently not competitive on the international markets.” The suppliers would agree with him on the price. “But we’re still biting the rocks with the end customers. We’re now driving on sight and then we’ll see how things go.”