Protests in China: More than anger over Covid policy 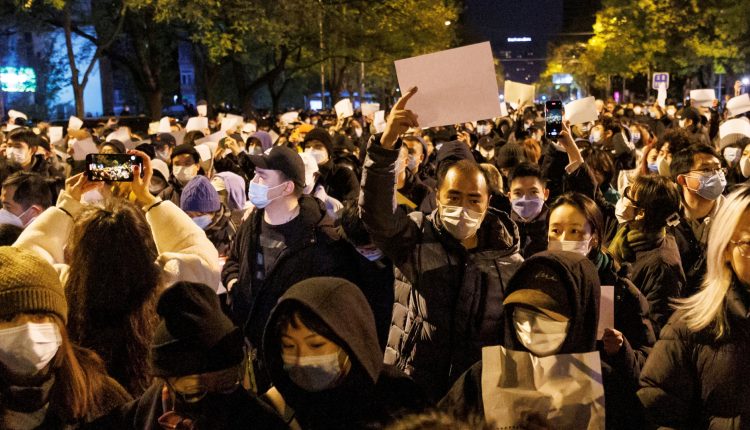 The protests in China are not aimed at local arbitrariness in Covid politics, says Asia expert Shi-Kupfer. China’s citizens would have understood that this is a problem in the system that President Xi is behind.

NDR: of China Power apparatus strikes back, sends the police onto the streets. Are the protests over before they really start?

Kristin Shi Copper: Not necessarily. Apparently, the great wave of protests has now been broken for the time being – by the massive police presence, by arrests, by calls and contacts with individuals, including some with their family members. This is of course intimidating.

But despite all this, we still see individual protest actions. And the resentment and dissatisfaction associated with those protests still lingers.

“It accumulated over weeks and months”

NDR: Of course we also ask ourselves: Have we in the West put on the magnifying glass too much and made the protests bigger than they are?

Shi copper: I do not think so. It is remarkable in itself that such a large number of people are taking to the streets in different cities. But that also shows that this has accumulated over weeks and months. One can also assume that there are more people who sympathize with these protesters or show solidarity.

We have seen an enormous amount of solidarity on social media in China as well. But these people may have been more reluctant to actually take this step onto the street. I think it reflects a sentiment that’s there in urban centers right now, because the lockdown experience is affecting everyone. All the people in China have been doing them for weeks and months.

“Shows of Solidarity on Social Media”

NDR: In China directs and influences the government of public opinion. What do people outside of the classic protest milieus like universities or the big cities you mentioned notice at all?

Shi copper: It certainly depends on which social media you use. This was quickly censored on Chinese social media. But even there, due to the sheer volume of snapshots mentioned in the moments in the messenger service WeChat-Moments, you can still see signs of solidarity from people who are not genuinely political.

But of course this is a smaller group that actively follows these protests and also partly helps to shape them. Many also use foreign social media and platforms, and it takes a certain amount of courage and technology to be able to install and use these media and platforms.

“Individual easing – and search for culprits”

NDR: Do you expect the Chinese government to make concessions on Covid policy?

Shi copper: Indeed, we see that there are signs of movement in Covid politics. Individual relaxations that have been announced for a long time are now being announced in some cases. Of course you have to wait for the implementation, also in Xinjiang, in Urumqi, where the fire catastrophe happened that got these protests rolling.

We also see signs that culprits are being sought. In the Volkszeitung, the companies that carry out the corona tests are blamed – they did not implement them correctly. At the moment you can see a mixture of smaller movements, but also the search for culprits in order to somehow take the wind out of the sails of these protests.

“Many people have understood: This is something with a system”

NDR: Can one really say that these protests are also putting pressure on President Xi?

Shi copper: Many people have already understood that these protests are a systemic phenomenon. It’s no longer just about local arbitrariness, about the fact that individual cadres on site have not implemented the Covid policy properly. There has been a centralization of dissatisfaction. And many people have understood: this is something with a system, this is something that Xi Jinping ultimately stands behind.

“Shows the contradictions in which the leadership has become entangled”

NDR: Does what is being discharged in this zero-Covid policy show that the Chinese system is incapable of reform?

Shi copper: It definitely shows the contradictions in which the Chinese leadership has become entangled to some extent. When implementing this policy locally, a lot of pressure is passed on downwards, sometimes with conflicting goals. The economy must not suffer too much, but there must not be too many cases either.

Or let’s take the vaccination situation: they say the rate is low, they’re worried. However, foreign vaccines have not been allowed to be used in China to support the vaccination campaign.

“Conflict in the neighborhood – a real danger”

NDR: Do you see the danger that China could instigate a military conflict in the neighborhood to distract from domestic problems and rally the people behind it, as we know from other regimes?

Shi copper: This is a common pattern. I think we have to have that on the screen in the near future. The Chinese government is currently busy organizing itself, evaluating the protests and drawing possible conclusions as to what can be done with regard to Covid policy, what you want to do at all. And then next March is the National People’s Congress, where political leadership will be confirmed. Until then, one certainly wants to maintain calm and stability. But depending on how the situation develops, such a scenario is definitely a real danger.