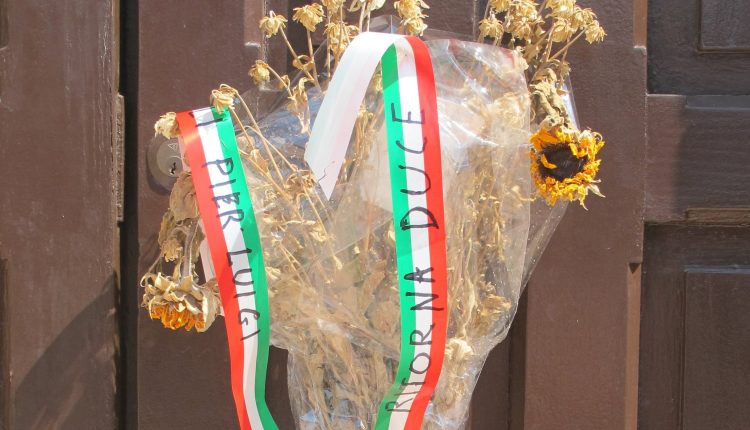 Mussolini’s birthplace of Predappi is a place of worship for supporters of the Italian fascist. 100 years after he came to power, the dictator is shown in the mildest light – and right-wing extremists are on the rise in the country.

It’s a journey back in time almost a century. In Forlì advertising signs point the way to Villa Mussolini. Behind a high iron gate, Italian flags are waving to the left and to the right, Domenico Morosini welcomes him and introduces himself as the “guardian of Italian history”.

In 2000, the entrepreneur from Lombardy bought the villa together with his wife. Benito Mussolini had it built for his family in 1923, when he was young at the time.

Morosini leads through the park with its many tall trees and through the building. Much of the original furnishings have been preserved, he says, showing one of Mussolini’s desks, the marriage bed, the living room and one of his uniforms. And Morosini makes no secret of the fact that he is a Mussolini admirer. He loves history and the “great men”. And Mussolini was just “one of the greats” and “spiritually 100 years ahead of his time”.

So speaks an admirer of the former dictator in Italy in 2022, 100 years after the March on Rome with which the fascists seized power in Italy.

An admirer opens the gates: the “Villa Mussolini” in Forli

Visit to the Mussolini admirers

How large the group of – often not so secret – Mussolini admirers still is in the country can be seen a few kilometers further. Predappi is a town of 6,000 on the northern edge of the Apennines, home of Mussolini and a place of pilgrimage and worship for right-wing extremists, old and new fascists.

For the 100th anniversary, Francesco Minutillo organized an exhibition on the March on Rome, which is clearly visible at the entrance to the town. With over 200 objects. Mussolini busts, medals, helmets, weapons, life-size dolls in fascist uniforms.

Everything else, Minutillo emphasizes, is in private living rooms – because in Italy there is a “blooming passion for collecting everything that has to do with the 20 years of fascism”. Minutillo points to a bronze bust of Mussolini – owned by a private collector; after the exhibition it will be “hidden in private” again.

Francesco Minutillo is also happy about a Mussolini bust – which, however, will return to the unknown owner after the exhibition.

The heirs of the partisans are horrified

Proudly showing off the Mussolini villa. Unashamedly exhibit fascist objects. Miro Gori shakes his head at the fact that this is possible in Italy 100 years after the fascists seized power – he says he is horrified and outraged and talks about his daughter’s encounter with “two bald heads” who did the “Roman salute”. ; an encounter that frightened his daughter.

Gori comes from a family of partisans who fought against Mussolini and the German occupiers. In Forlì he heads the ANPI, the national association of partisans. She is committed to ensuring that the crimes of fascism are not forgotten.

In Italy, fascism is a “past that won’t go away,” Gori notes – the Germans would have “tackled their past better – we, on the other hand, didn’t manage to come to terms with our past adequately.”

Descendants of the partisans like Miro Gori are appalled by the Mussolini cult – they point to the consequences for the country and its citizens.

Immediately after the war there was a broad amnesty for fascists and Nazi collaborators in Italy. It was intended to reconcile the country, but resulted in the seamless transfer of most of the fascist administrative, judicial, police and educational leaders to the Italian republic.

Even today, Italian judges leave exhibitions like the one in Predappio untouched, because according to a ruling by the Supreme Court, the possibility of exhibiting “history” is interpreted generously in Italy.

Most importantly, Gori says there’s still a widespread belief in the country that all was not bad under Mussolini. After all, he drained the Pontine Marshes, secured an autonomous food supply and introduced the nationwide education system – these were widespread platitudes, says Gori.

This is characteristic of the climate in the country, in which there are not only extremist fascists:

Above all, there is a soft belly in society that says: ‘Oh come on, if Mussolini hadn’t passed the racial laws in 1938, he would have been less bad than Hitler’. You can’t get around this story in Italy.

The other commemoration: On April 25, Italy commemorates the uprisings against fascism in 1945 with Freedom Day every year.

A party with neo-fascist roots is currently celebrating political success in Italy, also on the basis of a past that has not really been worked through. The Fratelli d’Italia, the brothers of Italy, are the strongest political force in the country in polls.

A green, white and red flame blazes in their party symbol, which in the symbolism of the Italian right stands for the flame on Mussolini’s grave. The neo-fascist MSI, founded after the war by a former member of Mussolini’s cabinet, used to reside in the party headquarters of the Brothers of Italy in the center of Rome.

Today, the Italian brothers are headed by Giorgia Meloni, who regularly responds annoyed and evasive to questions about how her party views fascism. There is nothing in her life that she needs to apologize for, but instead of current politics, she should talk about history on two out of three TV shows. She doesn’t think that’s right.

Successful in polls and in local elections

According to polls, the rhetorically fluent 45-year-old has replaced Lega boss Matteo Salvini as the most popular right-wing politician. After the Italian brothers did well in the first round of local elections in mid-June, Meloni confidently announced that her party was “absolutely ready to govern”.

A party with neo-fascist roots ready to govern – 100 years after the beginning of fascism in Italy.