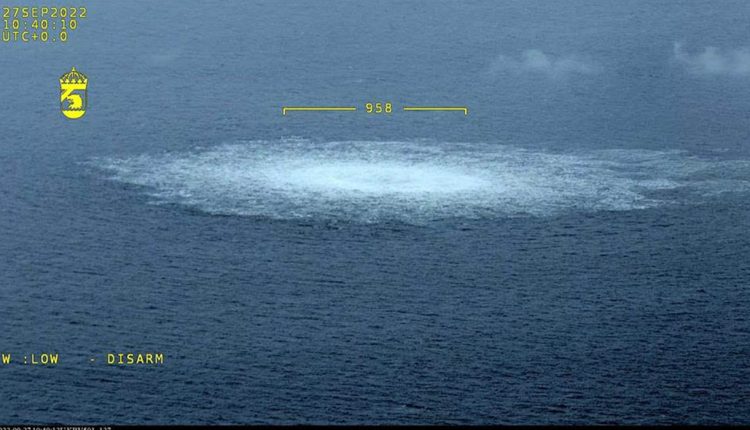 Sweden’s coast guard says it has discovered a fourth gas leak on the damaged Nord Stream pipelines in the Baltic Sea. The hole was also found this week. Meanwhile, the search for the culprit continues.

Both leaks “in the same sector”

The Swedish Coast Guard initially did not provide any precise information on the location of the newly found leak and why it was only discovered now. However, both damaged areas in the Swedish economic zone are “in the same sector”. Swedish media reported that the newly discovered leak was on the Nord Stream 2 pipeline. However, the Coast Guard did not initially confirm this information. The other leak involved Nord Stream 1.

At the beginning of the week, three leaks were discovered within a short space of time in Danish and Swedish waters on the Russian Nord Stream pipelines. Gas has been escaping since Monday, causing violent bubble formation in the sea.

So far, three leaks in the pipelines have been located.

The exact cause of the leaks remains unclear. Western security experts assume sabotage.

EU Interior Commissioner Ylva Johansson described the alleged sabotage of the Baltic Sea pipelines as a warning call and announced a stress test for critical infrastructure in Europe. “We (the EU Commission) will now contact all member states and we will carry out a stress test in relation to the critical infrastructure,” said the Swede on Wednesday evening in the ZDF “heute journal”.

In view of the leaks in the pipelines, she spoke of an “attack” that was an “escalation” and “a threat”. “As far as I can tell, it is a very intelligent attack that cannot have been carried out by a normal group of people,” said the Commissioner. The risk is great that a state is behind it. “Of course we have our suspicions. But it’s too early to make a final judgement.”

Terrorist expert: The originator is probably a state

Terrorism expert Peter Neumann said in the daily topics, he assumes that a state is the originator and not a non-state actor such as a terrorist organization. “It’s an operation that has had quite a bit of knowledge, expertise and preparation,” Neumann said.

On the question of whether Russia could be behind it, he said: “First of all, one could ask: Why should Russia destroy this pipeline, after all it wants to sell us gas?” But there are already arguments in favor of it. The energy market is becoming even more chaotic and prices are going up even further.

There is also a psychological consequence, according to Neumann. Everyone in Europe is now wondering what could happen to the other pipelines that actually have oil or gas flowing through them. “The level of uncertainty in Europe is greater than ever, and the cause of this is this attack,” said Neumann. That is definitely in Russia’s interest.

“An intentional psychological effect”, Peter R. Neumann, safety expert at King’s College London, on speculation about the leaks in the Baltic Sea pipelines

Kremlin blames the US

On Wednesday, the Kremlin dismissed speculation that Russia was involved in the damage to the pipelines as “stupid and absurd”. The leaks are “rather problematic” for Moscow, said Kremlin spokesman Dmitry Peskov. The Russian Prosecutor General’s Office has meanwhile opened a case of international terrorism. Moscow justified the step by saying that the damage to the pipelines had “inflicted considerable economic damage on Russia”.

The spokeswoman for the Russian Foreign Ministry had previously suggested that US President Joe Biden may have ordered the Nord Stream 1 and Nord Stream 2 pipelines to be sabotage. “The US President must answer the question of whether the US has implemented its threat,” wrote Maria Zakharova on the Telegram online service. Zakharova referred to statements made by Biden in February during a visit to Washington by Chancellor Olaf Scholz. Several weeks before the Russian war of aggression against Ukraine began, Biden warned that if Russia invaded the neighboring country, “there will be no more Nord Stream 2”. He “promised” that, emphasized the President, without giving any further details.

The US government dismissed the allegations that she could be behind the act of sabotage as “ridiculous”. “We all know that Russia has a long history of spreading misinformation,” said White House National Security Council spokeswoman Adrienne Watson.