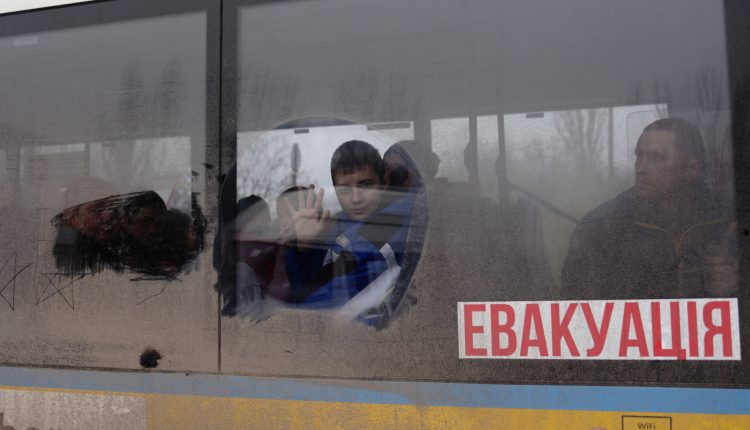 Nine months after the start of the Russian invasion, Cherson is liberated. But the city is destroyed. And the fighting in the area continues. Many people have no choice but to flee.

The recapture of Cherson is the latest achievement by Ukrainian forces. The departure of the Russian soldiers is a liberation for the majority of the remaining residents. But now, after nine months of war, many decide to leave the city. The reason: Russia has also destroyed civilian critical infrastructure in Cherson.

life in the basement

Valentina Stobynska opens the door to her basement. The farmer’s wife says it’s never locked, so that the neighbors can also seek shelter here. “Sometimes there are five of us sitting here.” Stobynska lives in the village of Tavriyske in the Zaporizhia region of south-eastern Ukraine. The front line has been running here for nine months.

“The war started on February 24, and from the 27th or 28th we heard shots here,” explains Stobynska. “We’ve been hiding in the basement since the beginning of March.” And they still have to to this day. Because Valentina Stobynska and her neighbors live between the Ukrainian and Russian artillery, she tells the AFP news agency.

The mutual shelling can be heard again and again, which will probably also increase in this region. The reason for this: the recapture of the southern Ukrainian city of Cherson.

The fighting could now shift to the east – experts assume that. And Ukraine has no plans to take a winter break, presidential adviser Mykhailo Podoliak explained on Latvian television:

We will not pause in our military strategy. That would be extremely disadvantageous for us, because Russia wants a break in order to continue destroying our infrastructure in the winter, to train the conscripted soldiers and to continue this trench warfare.

Where there is no active fighting, it is particularly the large-scale destruction of infrastructure that is forcing people in Ukraine to flee. Also from Cherson. The people here have just celebrated the liberation of the city, which was recaptured by the Ukrainian army two weeks ago.

But that doesn’t make it worth living in Kherson, Olha Kurakova tells the Reuters news agency:

No water, no electricity. That’s very difficult. My apartment is cold, there is no heating. I’m done. That’s why we decided to leave. The evacuation is free and people are running out of money.

Residents of Kherson are leaving the city for Kyiv.

Kurakova is standing in front of a coach that is supposed to take her to Lviv in western Ukraine. But there are also frequent power outages. Almost all thermal and hydroelectric power plants in Ukraine have now been damaged.

The power cuts could last until April, Ukrainian authorities warn. Presidential adviser Podoliak is optimistic: “Ukraine will survive this winter just as it survived the nine months of the war.”

The government will work to ensure that critical infrastructure works and that people receive at least some electricity, heating and water supply. “We know very well that Russia has only one trump card left – to fire at us with cruise missiles,” he says.

And that is exactly what Russia is doing. After the nationwide, targeted attacks on the energy infrastructure on Wednesday, hundreds of thousands of people are again without electricity and cut off from the water supply.