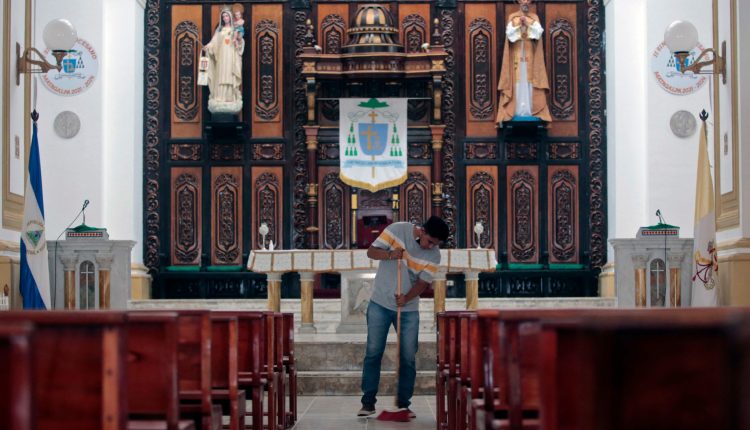 Catholic broadcasters were the last refuge for voices critical of the government in Nicaragua. Now the Ortega government itself has eliminated them. Human rights activists see only one way out.

The police beat women relentlessly, pushing them out of a Catholic radio station in Matagalpa, north of the Nicaraguan capital Managua. Just one scene from many last week. Daniel Ortega’s Sandinista government has shut down nine Catholic radio stations and three Catholic television stations in the country. She accuses the broadcasters of operating them without a license.

The investigative journalist Carlos Fernando Hierro, who lives in exile, sees another reason behind the closure: “Actually, we are witnessing an attack on freedom of expression and freedom of the press,” he says. The European Union also condemned the closure of the stations as arbitrary.

The persecution of the Catholic Church in Nicaragua is becoming more extreme. In addition to the switched off media, she now also has to fear attacks and raids on church services. A bishop is under house arrest.

Vice President Rosario Murillo sees herself as right, accusing the clergy of hate crimes against the population.

“The church is a thorn in Ortega’s side”

The closures of the small Catholic local media represent the most recent climax of the repressive policies of the ruling couple Ortega Murillo. They are tightening the noose around government critics. They are harassed, imprisoned and killed.

Already 1000 non-governmental organizations have been banned this year. Human rights activist Martha Patricia Molina says it is still the church that has been criticizing the autocratic behavior and offering protection to the persecuted for years.

The priests and bishops side with the people. They have climbed down from the pulpit, opened the doors of their churches and raised their voices against violence and for an end to repression.

The Nicaraguan human rights activist Vilma Núñez confirms that this force wants to destroy Ortega: “The only prophetic and credible voice that is accepted by 80 to 90 percent of Nicaraguans is the voice of the church. Those in power Ortega’s goal is to remain in power, and the church is a thorn in his side.”

“Humanitarian negotiations” instead of sanctions

Chasing, threatening, silencing – these are the regime’s methods.

For the human rights activist Anna María Méndes Dardón there is only one way out of the dictatorship in Nicaragua. “Diplomatic corridors must be created in order to conduct fundamental debates and clarify urgent humanitarian issues. For example, the issue of political prisoners,” she says. “There must be space for humanitarian negotiations in Nicaragua.”

It would be an alternative to economic sanctions. Because, according to Mendes, they not only affect the authoritarian government, but also the ordinary population. Already, more than half of Nicaraguans live below the poverty line.