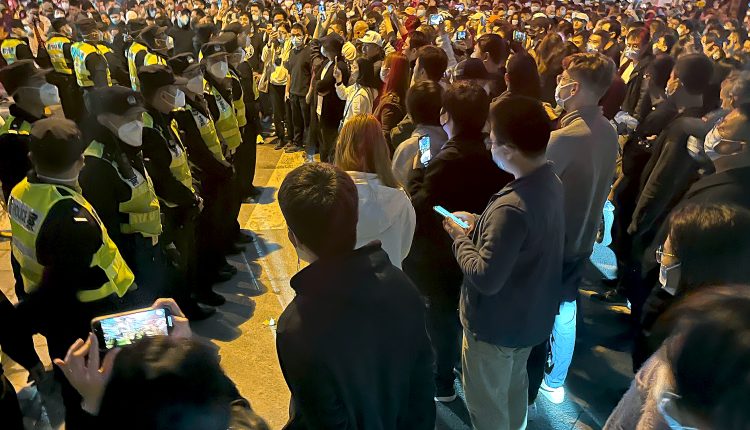 The anger of the people against the strict corona measures in China is exploding in more and more demonstrations. There were also protests at elite universities. Demonstrators demanded the resignation of President Xi.

Protests against the strict measures to contain the corona virus in China have spread to several cities. According to eyewitnesses, a memorial event for the victims of the Urumqi skyscraper fire in the financial metropolis of Shanghai developed into an open protest against state and party leader Xi Jinping during the night.

As could be heard in online videos, the demonstrators shouted, among other things: “Down with the Communist Party! Down with Xi!”. It is estimated that only a little more than 1000 people took part in the demonstration in the city of 25 million inhabitants. But that is also considered unusual, because in communist China there is neither the right to demonstrate nor freedom of expression. The communist leadership tries to suppress any protests.

According to eyewitnesses, police in Shanghai used pepper spray against protesters in an attempt to break up the demonstration. Videos of it, which circulated on the Internet, were quickly deleted by the censorship authorities in China.

New protests in the same place

However, during the day there were new protests in the same place. The Shanghai police cleared away all the flowers, candles and posters on Urumqi Road, which is named after the city of Urumqi in the Xinjiang region, in the early hours of the morning. But the people came back at noon.

The fact that the flowers laid in memory of the victims of the high-rise fire were collected by the police met with a lack of understanding among the people, reports ARD correspondent Eva Lamby-Schmitt.

Flowers laid in memory of the victims of the high-rise fire were cleared away by the police.

Because of the censorship, it is difficult to assess the extent of the protests across the country. More videos have appeared on the Internet showing images of protests. They are said to have been filmed in Nanjing in eastern China and in Guangzhou in the south, reports the US news agency AP, but points out that the videos cannot be independently verified.

The protests have now reached two elite universities in the capital Beijing. According to a report by the French news agency AFP, hundreds of students gathered in the courtyard in front of the cafeteria of neighboring Tsinghua University in the morning after a nightly vigil at Peking University.

“‘No to lockdowns, we want freedom’

A student started in the morning to hold up a white piece of paper at the entrance to the canteen in protest against the censorship, others would have joined. “We sang the national anthem and the international and chanted: ‘Freedom will win’, ‘End the corona tests, we want food’ and ‘No to lockdowns, we want freedom’,” the AFP agency quoted an eyewitness as saying.

China is still sticking to its zero-Covid strategy – and is pretty much alone in the world with this policy. As soon as individual positive tests occur, the communist leadership tries to get the spread under control with exit restrictions and mass tests. Because of the mass of corona infections, this is becoming increasingly difficult.

In lockdown for more than 100 days

While the pandemic seems to have lost its terror in other parts of the world, China has been reporting one new infection record after another for several days. The lockdowns are also becoming an increasing problem for the country economically.

The anger of many people about the massive restrictions was apparently increased by the high-rise building fire in Urumqi in the Xinjiang region in the north-west of the country. At least ten people were killed on Thursday. A number of residents criticized on social networks that the rigid corona measures had made the fight against the fire more difficult. Residents had been made more difficult to escape to the outside by locked apartment doors.

The Xinjiang region has been in lockdown for more than 100 days. As in other regions of China, some people are not allowed to leave their apartments and houses.

More protests against the strict corona measures in China