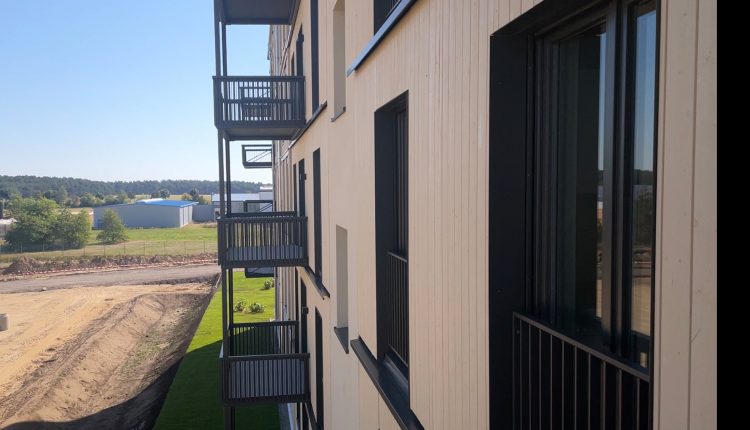 Since taking office, Minister of Construction Geywitz has been pushing for more social housing to be created for 14 billion euros. A company in Saxony-Anhalt is trying to do just that with mass-produced wooden skyscrapers.

The August sun casts the sharp shadows of the high-calibre group of visitors on the cobbled path that leads to a house that the man who came up with the idea sees it as an answer to the housing crisis. Federal Building Minister Klara Geywitz and the Prime Minister of Saxony-Anhalt Reiner Haseloff are standing in front of the five-storey building. The founder of the nokera company, Norbert Ketterer, explains that the future lies in mass-produced wooden skyscrapers.

The advantage, according to Ketterer, is the speed with which it was erected: “We erected this house within three and a half months.” From the outside you can’t tell that the house is made of prefabricated wooden parts.

Ketterer is standing in front of the electronically labeled doorbell and mailbox signs. The names Geywitz and Haseloff light up on the doorbell and mailbox – a gimmick by the company for the important visitor. Ketterer explains: “A property management company based in Brandenburg, for example, can control this centrally. Changing names when moving in and out, nobody has to drive out and change or attach a piece of paper.”

The elevator takes you to the model apartment on the third floor. The apartment door is opened with a programmed token instead of a key. Geywitz is first interested in the bathroom fittings. At first glance, there is no difference to a conventional bathroom.

The visitors are all the more astonished that it is manufactured as a separate module at a different location in southern Germany: toilet, shower, bathtub, vanity with a metal floor in a tile look, everything is already pre-assembled. On the construction site, the bathroom module is lowered into the intended interior space of the apartment using a crane. According to the company, it can be connected to the prefabricated connections within half an hour.

The founder of the nokera company, Norbert Ketterer (left), here with the Federal Building Minister Klara Geywitz and Saxony-Anhalt’s Prime Minister Reiner Haseloff, promises a finished building in three and a half months.

A month later, a team from ARD Capital Studios again in the Stegelitz commercial area near Möckern in the Jerichower Land district in Saxony-Anhalt: in the production hall, which was still empty when we visited in August, there are now several machines and conveyor lines. The robotic arms are still wrapped up against a warehouse wall. According to the company, which was founded just over two years ago, the hall is the largest of its kind in the world.

The dimensions are unparalleled: the production hall is 700 meters long and 170 meters wide, with underfloor heating so that the temperature is always the same for employees, the wood and also to save on heating costs. Four production lines are to ensure that wall and ceiling parts are not produced in 38 minutes, as was previously the case, but in nine to ten minutes. The company therefore expects to be able to produce up to 20,000 apartments per year in serial timber construction.

costs should be reduced

In the beginning there is solid construction timber. The so-called bolt work is assembled from this, a kind of skeleton. Depending on the purpose, i.e. whether it is an outer, inner wall or ceiling, different wood and/or gypsum boards are used. For example, the prefabricated wooden walls are insulated with natural materials and also fire protection elements. At the end, the finished wall element is transported to the warehouse. It is stored there until it is needed on the construction site.

“A large part of the costs are ancillary construction costs such as planning costs and statics. We only have them once for each type of house. It’s like at VW, if they develop a Golf, then they have the development costs once and then the more they sell, they go down below. It will be the same with us, says entrepreneur Ketterer. “In the beginning it is not that much cheaper, but today we are already below the prices of conventional housing construction,” he says in an interview with the ARD Capital Studio.

The aim is type approval

But unlike with cars, there is no central approval office for wooden houses of this type. The supreme building authority in Saxony-Anhalt would be responsible for the approval, but they have not yet received any type approval applications. Since 2019, such an approval has been possible in the model building regulations of the federal states. “Only nobody has done it since then,” says Ketterer, who is dependent on the help of politicians for his project, which is why he wants to talk to those responsible before he sends off an application.

His goal: a type approval that applies in all 16 federal states. Because up to now, a house approved in Saxony-Anhalt could not be built without renewed tests and approvals in Bremen or Berlin. He expects the type approval to speed up construction and approval projects throughout Germany. “And Germany needs affordable housing, doesn’t it?” says Ketterer, who grew up in Böblingen and is a naturalized Swiss.

Social housing is disappearing from the market

With this, Ketterer hit a nerve in Germany. According to the Working Group for Contemporary Building eV, only around 27,000 socially funded apartments will have been built in Germany in 2021. How many there will be in 2022 is not yet known.

It is also clear to the Federal Minister of Building that the number will be a long way from the target of 100,000 socially subsidized housing construction this year. “It’s only with luck that we can reach the figures from the previous year,” says Lukas Siebenkotten, President of the German Tenants’ Association. According to Matthias Günther from the Pestel Institute, a social housing unit disappeared from the market every 19 minutes last year because it was no longer subject to price maintenance.

“The situation is very serious”

The government would have to invest significantly more to create 100,000 socially subsidized apartments. Instead of 14 billion euros for the entire legislature, 12 billion euros would have to be invested per year, Siebenkotten said Report from Berlin. This is the result of calculations by the housing association, an association of the construction industry, tenants’ associations and IG Bau, among others.

“The situation is very serious,” says Siebenkotten. “We have significant immigration. Almost 900,000 people came from Ukraine alone, and we also have many people who already live here who urgently need affordable housing.” He fears there will be social upheaval if something doesn’t happen soon.

More on this in the report from Berlin today at 6:05 p.m. in the first