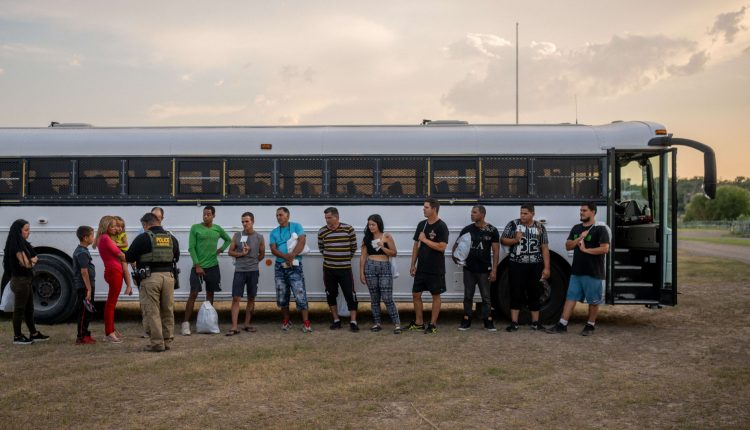 Hundreds of thousands are waiting at the Mexican border with the United States to apply for asylum in the United States. Now a US judge has extended a corona regulation that allows border crossings to be refused – much to the frustration of migrants.

Around 200 demonstrators gathered that day. Some carry signs that read, “Title 42 Discriminates Latin America,” while others read, “We don’t have Covid.”

Reyna is also among the demonstrators. The 42-year-old Mexican fled to Tijuana with her husband and four children a year ago. She tried to apply for asylum at various border crossings. In vain, they were turned away. Because of the title 42. Even though they had proof that the whole family was vaccinated, including negative Covid tests. “Why don’t they allow us to apply for asylum?” Reyna is angry, she doesn’t understand.

Escape from the cartels

The regulation, which states that anyone who wants to immigrate to the USA in Corona times can be rejected directly at the border with reference to the health protection of the US population, has long since expired. The Mexican comes from Michoacán – a state that has been particularly hard hit by the violence of rival cartels. She and her family received threats. Her nephew was killed. The cartel wanted to take two of her sons to work for them, Reyna says.

Many neighbors would have armed themselves. Her brother joined the cartel because he saw no other way out. Reyna’s family fled. They found shelter in a hostel in Tijuana. More than 80,000 Mexicans, mostly internally displaced persons, are currently waiting in the border region. A particularly large number of refugees came in April from Mexico and Cuba and the Ukraine.

Special regulations for people from Ukraine

While migrants from Ukraine fleeing the war have benefited from special arrangements, people from Central America, Haiti, Mexico and Cuba are waiting for Title 42 to finally be lifted. Almost two million people have been turned away because of this rule since the pandemic began. Soraya Vázquez Pesqueira from the non-governmental organization “Al Otro Lado” supports them in preparing their asylum applications.

Until recently, between 500 and 1,000 people from Ukraine were admitted to the United States and their cases processed in one day. So they can no longer tell us that they don’t have the capacity. These people from our region are fleeing other forms of violence. You have the right to the same treatment and facilities as people from Ukraine.

Many migrants at the border are desperate. Hundreds of migrants are trying to cross the border illegally every day from the small border town of Algodones.

Diego, who doesn’t want to give his real name, has tried it six times. The 30-year-old does not want to wait for a lengthy asylum procedure in view of the countless applications he has received. He even believes that the abolition of Article 42 is to his disadvantage. If the regulation were abolished, there would certainly be many deportations.

At the moment it is like this: He can cross the border. If caught, he would be deported to Mexico. If Article 42 is repealed, they will deport many people to their homeland, says Diego.

He himself comes from El Salvador and fled from the criminal gangs, the Mara Salvatrucha, who were demanding more and more protection money from him. A few weeks ago, he brought his two daughters, aged twelve and one and a half, to a border crossing. Unaccompanied children are accepted by the US. In the meantime, they have found accommodation with a relative in the USA, he says. And his wife has already made it across the border illegally.

He last tried it himself a few days ago. He left with three other women. It was incredibly hot, around 45 degrees. One of the women had a baby with her. It started crying because it couldn’t stand the heat. Then they were caught by the border guards, reports Diego.

Also on this day he sets out again and fails, as he reports later in a Whatsapp message.

Meanwhile, Reyna in Tijuana is still hoping for Article 42 to be repealed. The hostel is anything but safe. There are repeated shootings in front of the accommodation, last night a resident was shot. Despite everything, Reyna hopes that she will soon be able to apply for asylum. “This day will be a celebration”. But when that will happen remains uncertain.