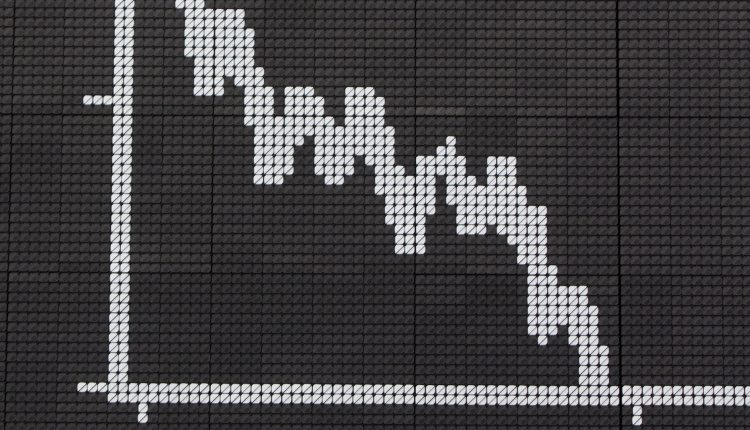 Against the background of rising interest rates worldwide, investors are withdrawing from the stock markets. The DAX also came under pressure at the end of the week and reached a new low over the course of the week.

The prospect of further rising interest rates drove investors further out of the stock market today. In the meantime, the DAX fell to its lowest level since November 2020, before finally limiting its losses somewhat. In the end, it went down significantly – to 12,284 points, a daily loss of 1.97 percent. On a weekly basis, the leading German index suffered a significant loss of almost 3.6 percent, with today’s slide, the DAX is now almost 23 percent in the red this year.

The industry and export-heavy MDAX, the index for small and mid-caps, was hit even harder. This ended at 22,541 points, a high daily loss of 3.12 percent.

The reason for the downward pressure is the current tightening of monetary policy by the central banks worldwide, above all by the US Federal Reserve (Fed). The monetary politicians want to curb escalating inflation, but at the same time this is fueling fears of inflation. Above all, investors are unsettled by the speed and vehemence with which the currency watchdogs are taking action against persistently high inflation. Until recently, many had not expected this.

At the same time, higher interest rates are making fixed-income securities more attractive, pinching the stock market from two sides. For Ulrich Kater, chief economist at Dekabank, it is clear that the stock markets will only receive upward impetus again “as soon as the end of the rise in interest rates is foreseeable”. However, that will not happen in the short term.

Recession is a foregone conclusion

“The fact that at least Europe is entering a recession phase is now only doubted by very few,” said analyst Jens Herdack from Weberbank. Since the domestic economy is suffering both from the rate hikes by the central banks and from the energy crisis triggered by the Ukraine war, the downturn is likely to be more pronounced than in the USA.

After falling below the previous year’s low of 12,390 points today, the technical market risks are also increasing. “If the annual low were undercut, the focus would be around 12,000 and then the low from October 2020 at 11,450 points,” says portfolio manager Thomas Altmann from QC Partners.

In New York, the leading stock indices are also deep in the red and continue to extend their losses. The leading index Dow Jones slipped below the 30,000 point mark and is currently losing a significant 1.9 percent. After the third major US interest rate hike in a row, investors are even more worried about a recession as collateral damage in the fight against high inflation. The interest-sensitive Nasdaq stock market is again down more sharply by around 2.1 percent.

“Rising interest rates, increasing pain,” concluded Jürgen Molnar, capital markets strategist at Robomarkets. With the prospect of two more rate hikes by the end of the year, the US Federal Reserve has catapulted yields on 10-year government bonds to their highest level in eleven years. That makes stocks less attractive. “Investors are facing a turnaround in interest rates at an unprecedented pace and are staying away from the stock market,” Molnar wrote.

Against this background, the experts at the US bank Goldman Sachs lowered the forecast for the market-wide S&P 500 Index. Because the rise in interest rates is pulling US stocks down, experts say the index should be 16 percent lower than previously assumed by the end of the year. Investors are well advised to stay hidden for the time being.

The euro is also steadily falling, having continued to increase its daily losses, especially in the morning, and is now beginning to settle below par with the dollar. It is thus lower than it has been for 20 years. In the afternoon, the common currency temporarily cost only $ 0.9707. Currently only 0.9726 dollars are paid for one euro.

Apparently, market participants no longer believed that the ECB could keep up with the Fed’s interest rate pace, which is increasing the pressure on the common currency, experts said. The European Central Bank set the reference rate at 0.9754 (Thursday: 0.9884) dollars.

Oil prices have also fallen sharply today. A barrel (159 liters) of North Sea Brent cost US$ 85.78 in the late afternoon. That was $4.68 less than the day before. The price of a barrel of the US West Texas Intermediate (WTI) grade fell by $5.07 to $78.42. This means that the WTI price has fallen below $80 for the first time since January.

Commodity experts at Commerzbank believe that oil prices are being kept in check by “high economic risks”. Analysts pointed to several central banks that have significantly raised their key interest rates in the course of the week in the fight against high inflation. Rising interest rates are causing investors to worry that the economy will continue to lose momentum and demand for crude oil could fall.

More signs of recession came from purchasing managers today. Because the German economy shrinks in September due to high inflation and rising interest rates than it has since the beginning of the corona pandemic almost two and a half years ago.

The purchasing managers’ index for the private sector – manufacturing and services together – fell by 1.0 to 45.9 points. This is the lowest level since May 2020, said the financial services provider S&P Global in the morning for its monthly survey of around 800 companies. The barometer, which is widely observed on the financial markets, is thus well below the 50 mark, from which point it signals growth.

“In view of the accelerated downturn and the further deterioration in leading indicators, the German economy is likely to shrink in the third quarter of 2022,” commented S&P economist Phil Smith on the development. “And the outlook for the fourth quarter is also not very positive.”

Business sentiment in the euro area also deteriorated further in September. The S&P Global Purchasing Managers’ Index fell 0.7 points to 48.2 points from the previous month. The indicator is thus lower than it has been for 20 months. “A recession is on the cards for the eurozone given the deteriorating business situation and increasing price pressure from rising energy costs,” said Chris Williamson, S&P chief economist.

DAX member Daimler Truck builds Mercedes-Benz trucks in China for the first time. In the joint venture with the Chinese manufacturer Foton Motor in Huairou, north of Beijing, the go-ahead was given on Friday for local production of Actros semitrailer tractors.

“China is the largest market for heavy trucks in the world and offers significant growth potential,” said Karl Deppen, Head of Asia and Member of the Board of Management of Daimler Trucks. They are the first Mercedes trucks to be “made in China for China”.

The plant of the Beijing Foton Daimler Automotive (BFDA) joint venture includes two production lines for the tractor units with two drive variants, which were developed on the global platform of Daimler Trucks. Since the market launch of the Actros in 1996, more than 1.5 million units of this model have been sold worldwide. In the joint venture founded in 2012, Daimler Truck and Foton have so far jointly built trucks of the Foton Aumann brand.

The shares of the financial service provider Hypoport collapsed dramatically in the SDAX by almost 46 percent. The company has suspended annual targets due to weak demand. The current forecast for the year will be “clearly missed,” said Hypoport on the evening before the stock exchange closed in Berlin. It is not possible to predict whether the reluctance of consumers to finance private real estate will come to an end as the year progresses. The second half of the year has so far shown very weak demand.

For the third quarter, sales are expected to be slightly below the previous year’s level and balanced earnings before interest and taxes on a provisional basis. Analyst Simon Keller from Hauck Aufhäuser Investment Banking spoke of a “devastating profit warning” in a study available today. He downgraded the share from “Hold” to “Sell” and almost thirdd the price target from 205 to 70 euros.

Boeing has to pay a fine of 200 million dollars

The aviation group Boeing will pay millions in the dispute with the US Securities and Exchange Commission after the two crashes of the 737 Max jet. The SEC had accused the company and then Boeing boss Dennis Muilenburg of misleading investors about the safety of its 737 Max. The Securities and Exchange Commission announced on Thursday (local time) that Boeing had to pay a fine of 200 million US dollars (around 203 million euros) and Muilenburg a fine of one million US dollars. Neither Boeing nor Muilenburg have admitted wrongdoing, but both agreed to the payment.

The Airbus rival had agreed to pay more than $2.5 billion in fines with the Justice Department in early 2021 over fraud and conspiracy allegations related to the scandal. After two crashes with a total of 346 deaths, Boeing was heavily criticized – the company slipped into a crisis. The problem plane 737 Max was banned from take-off for a long time after the two crashes.

In Zurich, Credit Suisse stocks slipped by up to 8.3 percent and were cheaper than ever at CHF 4.26. According to insiders, the crisis-ridden bank is exploring the conditions for a capital increase. Analyst Christian Schmidinger from the Zurich Cantonal Bank put the capital requirement at up to four billion francs (4.2 billion euros).

Every movie right now, from Amsterdam to…