Main Battle Tank Stocks: How Many Leopards Does the West Have? 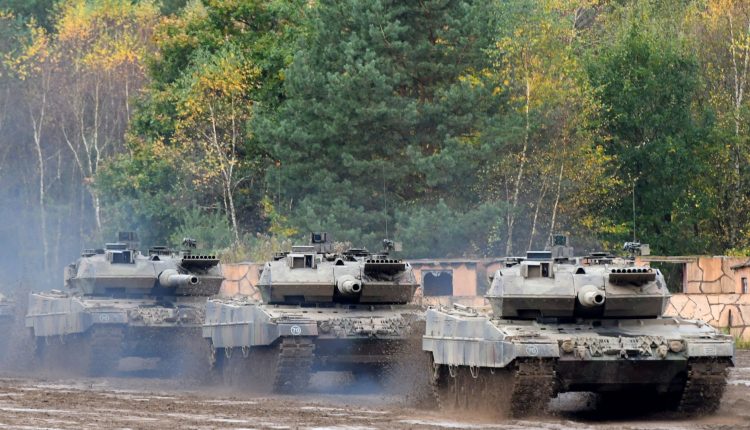 After the decision to deliver German battle tanks to Ukraine, the government wants to coordinate with armaments companies. How big are Europe’s stocks – and what can German industry deliver?

Defense Minister Boris Pistorius has announced that he will start talks with the arms industry in the near future. It should not only be about the “Leopard” battle tanks – but also about the question of how better and faster supply routes are possible. According to the London-based International Institute for Strategic Studies (IISS), around 100 Leopard 2 battle tanks would be needed to noticeably improve Ukraine’s defense capabilities. How many “leopards” does Germany and its partners have? And how fast can manufacturers build new tanks? Answers to some important questions.

How many main battle tanks does the Bundeswehr have?

The federal government has decided to deliver 14 Leopard 2A6 main battle tanks directly from Bundeswehr stocks to Ukraine in about three months. In contrast, previous delivery scenarios were mostly based on the somewhat older type 2A4, which the Bundeswehr had retired in recent years. This type is likely to go to Ukraine in a second step, which, according to Defense Minister Pistorius, would take “a little longer”. But Pistorius also did not rule out that the second delivery could be the older “Leopard 1” tank.

The International Institute for Strategic Studies (IISS) assumes that there are more than 200 “Leopard 2A4” in storage with industry and the Bundeswehr – including the 22 copies at the Rheinmetall armaments group. According to data from the IISS, the Bundeswehr has 321 “Leopard 2” of newer series in active stock or in maintenance, almost a third of which are the latest models 2A7 and 2A7V. For 2025, the Bundeswehr has announced a target stock of 320 “Leopard 2A7V”.

How many “leopards” do the partners have?

German main battle tanks are also expected to be supplied directly from the stocks of NATO partners. Today, the federal government gave the go-ahead for this in principle. Yesterday, Poland submitted a corresponding request to the German government for the delivery of 14 Leopard tanks to Ukraine. Finland, the Netherlands and Spain have also declared their willingness to supply main battle tanks.

A total of over 2100 “Leopard 2” of different variants are in the armed forces of NATO or other European countries such as Switzerland and Austria. According to data from the IISS, in addition to the 100 active “Leopard” tanks, Finland has stored 100 examples of the 2A4 series, Norway another 16.

In the Federal Republic, only the “Leopard” models are currently considered to be “battle tanks”, i.e. a heavily armored track-laying vehicle with a particularly powerful main gun.

As is usual with projects of this magnitude, numerous companies are involved in the “Leopard” production. The general contractor for the project is the Munich manufacturer Krauss-Maffei Wegmann, and Rheinmetall from Düsseldorf also has a large production share.

The basic model of the “Leopard” was built from 1965. This model series was replaced by the “Leopard 2” from 1979. The 2A7 and 2A7V are now the most modern models available. The further development “Panther KF51”, which Rheinmetall presented last June, is still in development and, according to the company, could become available within the next 15 to 18 months.

While Krauss-Maffei Wegmann is now owned by the German-French holding company KNDS, Rheinmetall is a listed company. More than 70 percent of the shares are owned by smaller shareholders.

How many tanks could the industry supply now?

According to Rheinmetall, it could make around ten to 15 refurbished Leopard 2A4s available this year – but only if the order is placed now. According to Rheinmetall, it has a total of 22 Leopard 2A4 and 88 Leopard 1A5 in stock. According to the company, most of these could be made operational within the next eight to twelve months. Rheinmetall also has the models in its inventory because several of the company’s combat support vehicles, such as the “Kodiak” armored personnel carrier, are based on the “Leopard 2” chassis.

A further 29 “Leopard 2A4” have already been ordered and are expected to be completed by April. These are intended for the Czech Republic and Slovakia, which should then pass on Soviet-made tanks to the Ukraine in a ring exchange. The Czech Republic has already rejected a direct delivery of the tanks to Ukraine.

Should further “Leopard” tanks be ordered, the current capacity of the manufacturers is roughly estimated at possibly three tanks per month – starting in the coming year 2024. Referring to “many adjustment screws” such as the still unclear order situation and security policy issues, the However, the industry is reluctant to make its own forecasts.