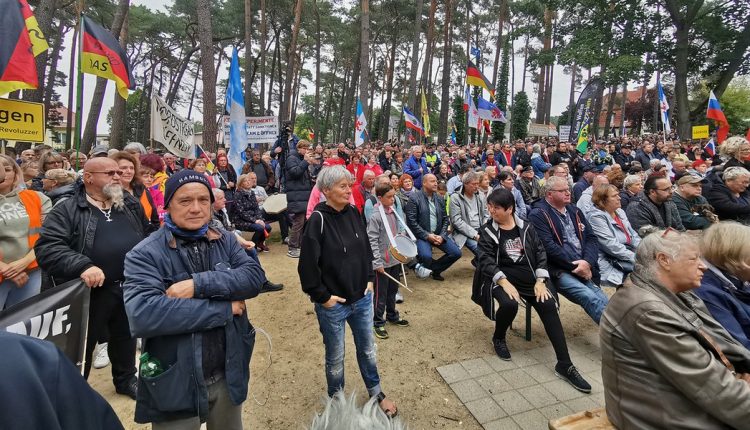 The demonstrators had the motto of their protest: “So that our homeland has a future – finally open Nord Stream 2” placed. The landing station of Nord Stream 2 is located in Lubmin on the German side. The demonstration was registered for 5,000 participants. The lifting of the sanctions imposed on Russia as a result of the Russian invasion of Ukraine is also one of the demands. The demonstrators hope that if the pipeline is commissioned, cheap Russian gas will flow to Germany again. In this way, energy prices can be made affordable. However, the federal government had repeatedly ruled out opening the pipeline.

Activists with Ukraine flags line up in front of the stage

Extremely radical slogans could be read on some posters.

Speakers underpinned the demands – including the resignation of the federal government – in their contributions. Numerous Russian flags were waved. Many participants held signs with the slogan “We are the people”. According to the police, the rally has been relatively peaceful so far. As four people with Ukraine flags and signs with the inscription “Russia Is A Terrorist State” lined up in front of the stage, it almost got violent. The pro-Ukraine activists were pushed back accompanied by loud screams and drumming. After that, the atmosphere relaxed again.

Demo call from “the base”-Party member

Numerous police forces were on site. The organizer of the rally was Martin Klein, a member of the party “the base”. This emerged in 2020 from the Corona protests at the time and is now committed to peace talks with Russia. Around 1,800 participants gathered in Lubmin for a similarly motivated demonstration earlier this month. At the time, many Russian flags were waved and banners with radical demands such as “Red-Yellow-Green to the Eastern Front” been shown.

How much influence did Russia have on the state government in Mecklenburg-Western Pomerania? The podcast opens the file Nord Stream 2. more

According to the investors’ plans, the first gas should be delivered through the terminal as early as December. more

The war has stalled the flow of gas. Current data shows where the gas comes from and how full the gas storage facilities are. more

At the meeting in Lubmin, the Federal Minister of Economics spoke to Mecklenburg-Western Pomerania’s Prime Minister Schwesig. more