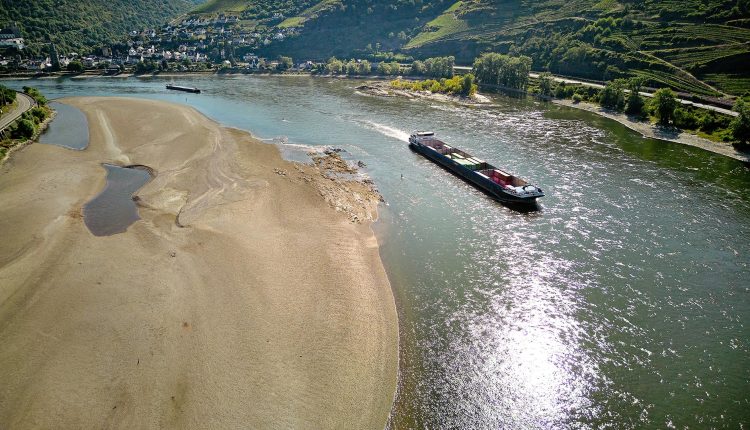 Heat and lack of rain cause the water levels on the Rhine to drop. The low water could have dramatic consequences for the economy, because the river is one of the most important transport routes in this country.

Drought and heat cause the level of the Rhine to drop. This endangers the supply of coal for the Staudinger power plants in Hesse and Datteln in North Rhine-Westphalia; the energy company Uniper may have to reduce its electricity production in these plants in the next few weeks. The utility announced this week that irregularities in electricity production could occur up to September 7th.

Heat waves and the lack of rain have ensured that the water level in the Rhine has been falling for weeks. In several places it has already fallen below one meter, although the Rhine is on average two meters deep at this time of year. The river, which is more than 1000 kilometers long, carries even more water than three years ago: in October 2018, the lowest water levels ever measured were recorded on the Rhine. Nevertheless, the lows this year are already problematic – also because they are now moving in the direction of the levels of 2018.

The Kaub narrow point near Koblenz is particularly affected: the water level there is only 56 centimeters. Ships need a water depth of 1.5 meters to navigate through this bottleneck with a full load. The bottleneck there is important for inland shipping, especially for the route between Koblenz and Bingen.

The Rhine is one of the most important shipping routes in Germany. Raw materials such as grain, chemicals, minerals, coal and oil products are transported on it by cargo ship. It is unclear how long the freighters will be on the Rhine. Because the authorities do not close the river at low tide – unlike at high tide; they leave it up to the shipping companies to decide whether they want to continue sailing the river or not.

“We continue, but can only load about 25 to 35 percent of the ship’s capacity,” said the director of the shipping cooperative DTG, Roberto Spranzi. DTG operates around 100 ships on the Rhine. “This means that customers often need three ships to transport their cargo – instead of just one.”

For companies that depend on transport by ship, this means significantly higher costs: The spot prices for a liquid tanker from Rotterdam to Karlsruhe, south of Kaub, rose to around 94 euros per tonne. In June, the price per ton was around 20 euros.

Levels should continue to fall

And it could get even more dramatic. Water levels of between 30 and 35 centimeters are expected in Kaub in the coming weeks. Some ship types can then no longer pass through the bottleneck. The companies along the transport route are therefore on the alert: According to its own statements, the steel company Thyssenkrupp has taken various measures because of the low water. “Our raw material requirements are currently secured on this basis,” says the group.

The chemical group Evonik explained that production is running: “At Evonik, there are currently no significant restrictions on our logistics chains due to low water levels in the Rhine.” Wherever it makes sense and is technically possible, Evonik takes precautions, for example by stocking raw materials.

The low water levels in the Rhine not only have an impact on the economy, but also on the environment. The concentration of pollutants increases and the temperature of the Rhine rises. This can be life-threatening, especially for native fish species.