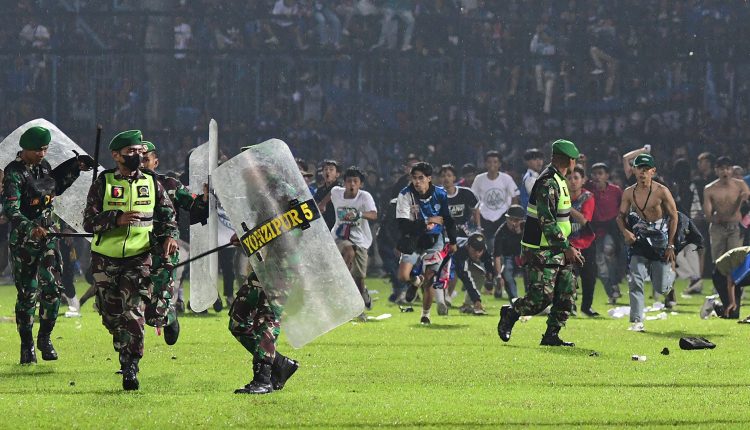 Two more officials have been fired after the stampede at an Indonesian soccer stadium. The number of dead rose to 133. According to the police, there were too few and too small escape routes in the stadium.

After the mass panic in a soccer stadium in Indonesia, there are further personal consequences. Two Arema FC football club officials have been banned for life. The senior match organizer and match security coordinator are now banned from all football-related activities for life, according to the Indonesian Football Association. In addition, Arema FC will not be able to host any more matches for the remainder of the season and will have to pay a fine of 250 million rupees (around 16,600 euros).

The chief of police in the city of Malang was relieved of his post on Monday, and nine other officers were suspended. At least 28 police officers are also being investigated for alleged violations of professional ethics.

The number of dead after the stampede has meanwhile risen to 133. Among them are at least 37 children and young people between the ages of three and 17, said the Indonesian Ministry for the Advancement of Women and Child Protection.

The disaster came after thousands of fans stormed onto the pitch at Kanjuruhan Stadium following the weekend’s Arema FC-Persebaya FC match in Malang, Inel Java. Witnesses said it was Arema FC’s first home defeat against their rivals in 23 years. Disappointed, thousands of the 42,000 home team supporters in attendance began throwing bottles and other objects at players and officials.

Police used tear gas and batons, causing panic among people who ran to the exits. Most of the victims died from lack of oxygen or were trampled to death. Hundreds of spectators were injured. It’s one of the worst disasters in football history.

Experts should clarify the background

The Indonesian government deployed an independent team of experts to clarify the background. It is to investigate why the police used tear gas at all – this is prohibited in stadiums according to the rules of the world association FIFA. As the police announced, there were not enough escape routes in the stadium. The gates of the arena were too small, only two people could have fit through at the same time. This is how the deadly crush came about.