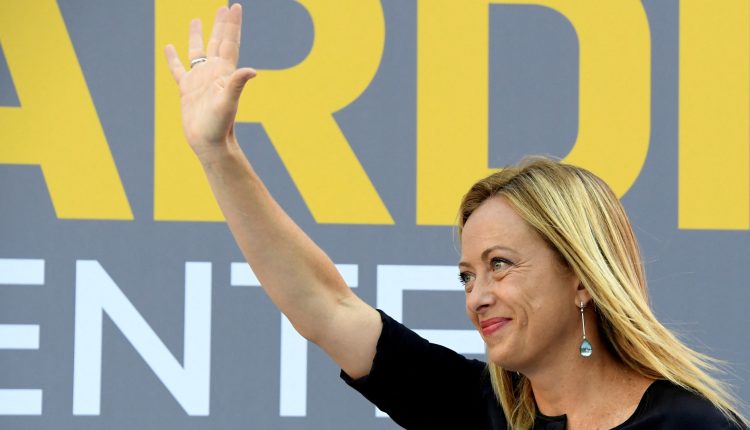 Before the elections in Italy, Giorgia Meloni and her right-wing party “Brothers of Italy” are ahead in polls. Many are concerned about the rise of women with a neo-fascist past – who are now trying to correct their image.

Giorgia Meloni has long been criticized by her political opponents because of this symbol: the green, white and red flame blazes in the coat of arms of her party “Brothers of Italy”. In the symbolism of the Italian right, it stands for the eternal fire on the grave of the fascist dictator Benito Mussolini.

Now, according to several Italian newspapers, Meloni is leading a discussion among her party leadership about removing the flame from the party symbol.

Here the flame still blazes in the party symbol of the “Brothers of Italy”. Does Meloni want to change that now?

“She’s doing this with a view to the elections”

Emanuele Fiano, deputy of the social-democratic PD and former board member of the Jewish community in Italy, finds this – at this point in time – politically transparent. He explains: “The flame in the party symbol obviously stands for a root from which one has not been able to part until now.”

It is obvious that Giorgia Meloni now wants to declare at international level that there is no problem for democracy with her. And of course she does that with a view to the elections.

It is an image correction operation – seven weeks before the parliamentary elections. Namely from the woman who currently has the best chance of becoming the next Prime Minister of Italy.

Meloni wants to clear up concerns

Nobody should be afraid of her, that was Meloni’s key message a few days ago in a video message for the foreign press in Rome. The right-wing politician addressed the international correspondents in three languages. In English, in Spanish and with a presentation in French. After introducing herself, she said:

For several days I have been reading articles in the international press about the upcoming elections to give Italy a new government – in which I am described as a danger.

In her speech, which lasted six and a half minutes – questions were not possible – Meloni tried to dispel precisely these concerns about her.

Meloni: “Fascism handed over to history”

The former youth minister under Silvio Berlusconi promised, among other things, loyalty to the Atlantic alliance and an Italian government that would be stable and would “not give away any euros”. Above all, however, the boss of the “Brothers of Italy” tried to refute the accusation that she had an unclear relationship to fascism.

She explains: “For decades now, the Italian right handed over fascism to history and condemned the withdrawal of democracy and the infamous anti-Jewish laws without ambiguity. Our condemnation of National Socialism and Communism is of course also without ambiguity”.

Not ready for outright condemnation of Mussolini

As always, Meloni made a difference in her video for the international media between German National Socialism – which she completely condemns – and Italian fascism, in which she criticizes individual points but avoids a blanket condemnation. That’s exactly what she’s been accused of in Italy for years.

One of her predecessors as leader of the right, Gianfranco Fini, had described fascism as “the absolute evil”. Meloni was never ready for such a fundamental condemnation of the Mussolini regime. Instead, she emphasizes that Mussolini must be judged in the light of his time. Incidentally, and this is also a recurring phrase by Meloni, for her fascism is history and not current politics.

Meloni began her political career in the 1990s in the neo-fascist MSI party. In the polls, Meloni’s “Brothers of Italy” are currently the strongest party with over 24 percent, the right-wing alliance she leads is more than 15 percentage points ahead of the centre-left forces.

MP and former representative of the Jewish community, Fiano, is concerned that Giorgia Meloni could become Italy’s new prime minister. Concerns about the neo-fascist roots of the Brothers of Italy do not play the main role. What worries him more is that she is close to Hungarian Prime Minister Viktor Orbán and those in power in Poland, according to Fiano.

Our criticism of the lack of coming to terms with the past must not lead us to overlook the fact that they are currently committed to illiberal ideas of democracy.

How Much Are Apartments in Los Angeles,…