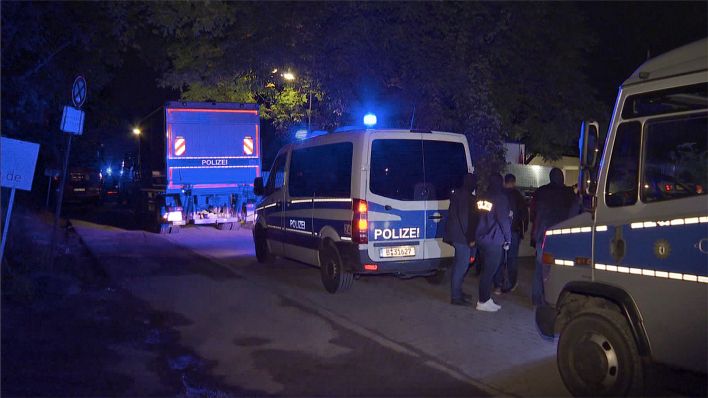 Police action against the “Hells Angels”: Since early Thursday morning, apartments and prison cells have been searched in Berlin and Brandenburg. A banned local group is being investigated.

Investigators have been searching the premises of the “Hells Angels” rocker group in Berlin and Brandenburg as well as in Saxony and Saxony-Anhalt since early Thursday morning. Specifically, it is the local group “HAMC Berlin Central” and its supporter group “MP 81 Berlin Central”. Both groups were banned, as announced by the Senate Interior Administration and the police.

The police are conducting searches for rbb information in the entire Berlin city area, with a focus on Reinickendorf. “Some of the searches will continue until noon,” announced a police spokeswoman when asked by rbb.

A total of 45 apartments and other rooms such as a clubhouse and prison cells in Berlin, Brandenburg, Saxony and Saxony-Anhalt were searched, affecting 42 people, a police spokeswoman said. Around 1,300 police officers were deployed in the four federal states, including several special task forces (SEK) from the federal states and the GSG9 of the federal police.

“It is now forbidden to distribute or publicly use the symbols of the association and its supporter group,” said the Senate. The club’s assets were confiscated. The club is a replacement organization for the club “HAMC Berlin City”, which was banned in 2012, and is continuing its “unconstitutional efforts”, it said. The ban at that time only came into force later.

The former club then dissolved itself after several members ended up in prison or fled abroad for the so-called betting shop murder in 2014. “Today’s ban makes it clear that we will not look the other way when a newly created organization takes the place of an association that was already banned in 2012 and replaces it,” said Interior Senator Spranger.

The federal or state governments can ban associations and confiscate their assets if they serve illegal purposes. The legal basis for this can be found in the association law. The affected group will then be forcibly dissolved and its symbols may no longer be shown. The establishment of substitute organizations is also prohibited.

The federal and state governments have already banned numerous extremist and criminal groups over the years. According to its own statements, the federal government alone dissolved 58 clubs and a further 117 so-called partial and substitute organizations by 2021. 33 of these bans related to groups from the area of ​​bikers or other organized crime.

In addition, in numerous cases, the federal states took separate action with bans on regionally active groups or local offshoots of associations. This particularly affected numerous subdivisions of rocker or rocker-like associations. Among other things, many local groups of the “Hells Angels” were banned at the level of individual federal states.

Care: “Financing on credit is not a model for the future”