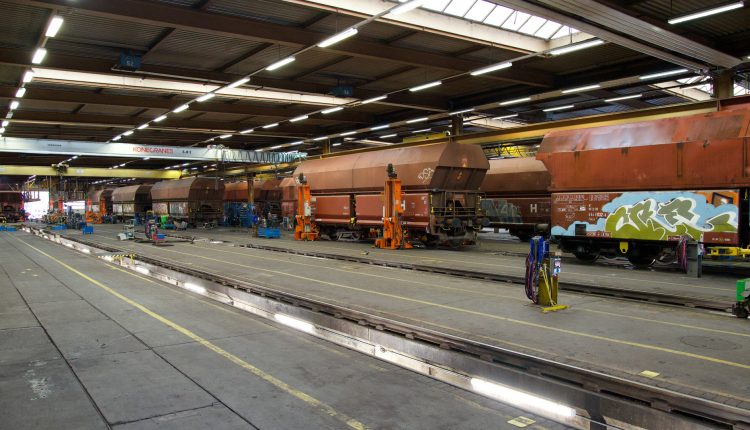 More hard coal trains are rattling through Germany again – because coal-fired power plants are producing more electricity again due to the energy crisis. To do this, the railway company takes back discarded wagons. The conversion works are in continuous operation.

The rustproof brown freight car that is hovering in front of Markus Heyob weighs twenty tons. He raised it with a lifting platform so that he can exchange the bogies with his colleagues. Although they also weigh three tons, he can push them with one hand: the wheels slide almost silently over the rails in the Saarbrücken railway works. In the next few hours, Heyob and his colleagues will dismantle the bogies. Your individual parts come to the examination and are processed. The coal wagon that hovers in the air in Saarbrücken is then given the freshly prepared bogie of another wagon of the same construction. It is the last step in the preparation of the old cars. There are a handful of other coal wagons lined up on the same track, all in varying stages of renovation.

The heavy wagons can be pushed back and forth effortlessly on the lifting platform.

The energy crisis gave them an unexpected second spring: the railways had sent more than a thousand coal wagons to the proverbial siding in recent years. It was not foreseeable that ten years after the end of mining in the Saar, hard coal would ever be transported again on the Saarland rails – until the federal government reactivated old coal-fired power plants in view of the impending gas shortage. In Saarland this means: Two power plants that were actually shut down are starting up again, another will not be closed as planned.

Right of way on the tracks

Since then, coal wagons have been processed on the assembly line in Saarbrücken in three shifts. Rarely does a wagon stay in the hall for more than two days. The fact that the old wagons still existed at all was a coincidence, says Andreas Wirbelauer with a laugh. The head of DB Cargo’s maintenance division is visiting the Saarbrücken plant and checking the progress. “Wagons like this are expensive goods. And before we scrap them, we checked whether we could convert them for other transports.” So the coal wagons were to become bulk goods wagons, for example for sand and gravel. But the plan is now on hold.

Around 50 tons of coal fit in a coal wagon. Around 45 of them are usually queued up in the trains that supply the Saarland with hard coal from the ports of Rotterdam and Antwerp. The teams then weigh up to 2800 tons. When the first coal was delivered to Bexbach in Saarland, State Secretary for Transport Oliver Luksic (FDP) promised: The power plants would get their coal, even if ICE and Co. had to wait.

The fears that passenger trains would actually have to give priority to freight traffic have so far not come true. So far, the additional freight trains have been able to be easily incorporated into the timetable, according to DB Cargo headquarters. Perhaps one reason for this: Because of the fall in gas prices, the electricity market has made far less use of the Saarland coal-fired power plants than originally planned. At the moment, only two out of three power plants are running at all – and as a result far less coal has to be transported by rail than originally thought.

Some wagons do not yet have “whisper brakes”

But the railway technicians also had to avoid delays on the rails in another way. “There are a couple of very old cars in Rostock,” explains Wirbelauer. “Before reactivation, they are allowed to drive at a maximum of 25 km/h. If I now drive them across Germany at 25 km/h to Saarbrücken, I will obstruct all rail traffic in Germany. That’s why I then of course repair them in Rostock as well .”

There are eight plants throughout Germany that repair coal wagons. The one in Rostock even has to deal with special cars: some of them have been parked for so long that they don’t yet have “whisper brakes” – an overhaul program that was actually completed years ago. With the whisper brakes, the trains are only half as loud as before, according to Deutsche Bahn. The old metal brake pads are replaced with new ones made from a special material.

The cars that arrive in Saarbrücken already have the quieter brakes. In addition to the new bogies, it is mainly the dumping devices that cause headaches. “After a few years – and especially when they’re parked – the hydraulic hoses become porous. They create the pressure that opens the flaps on the sides of the car,” says Wirbelauer, head of maintenance. If the hoses break, the coal stays in the car. Two mechanics replace the hoses on a wagon in the Saarbrücken maintenance hall. A special machine simulates the oil pressure that occurs while driving, and the technicians look for leaks.

One wagon further, the work is already finished. Foreman Simon Lorz activates the mechanism with an oversized wrench. The flaps open and close again. It works three times in a row, then the oil pressure is too low. “That’s great,” says Wirbelauer, “according to the regulations, it only has to be two passes. This car won’t cause any problems in operation.”

A good sign – and almost the starting signal for the second life of the coal wagon on Germany’s rails. If a car drives out of the hall, the next one can move up. The railway has already put almost a thousand people into operation since June. A few more will be added by the end of the year. Then the conversion is complete and the day-to-day business for the train mechanics returns to the Saarbrücken lifting platform: ore wagons that supply the steel industry on the Saar.

The reactivated coal-fired power plants should be connected to the grid by 2024 at the longest. Perhaps the wagons that have now been converted will meet the mechanics in the Saarbrücken plant again – when they are converted for the second time and, as construction material wagons, finally leave the coal transport chapter behind as originally planned.