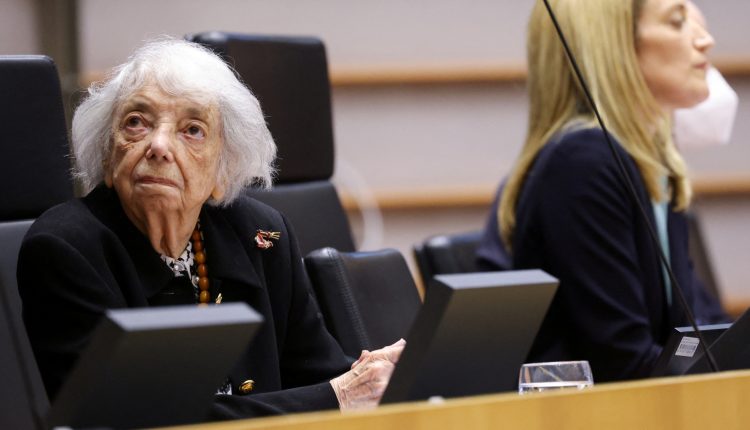 Be vigilant when people are denied their humanity: This appeal was the focus of the speech by Holocaust survivor Margot Friedländer in the European Parliament. In an interview, she says: You can’t watch and remain silent – and you have to take your chances.

ARD: Ms. Friedländer, the Auschwitz death camp was liberated 77 years ago. What must happen in the coming decades so that the crimes of the Holocaust are not forgotten?

Margot Friedlander: I’m doing the best I can do. That’s all I can do. I want to say what people have done. That they didn’t recognize people as people. It is the government that should do something. It’s the people we all know who can’t be silent. You mustn’t be silent! Do something! You all have the opportunity. It’s for you, it’s not for me. It’s for you.

Margot Friedländer was born in Berlin in 1921 and deported to the Theresienstadt concentration camp in 1944. She was the only one in her family to survive the Holocaust. She then moved to the USA before returning to Germany after decades and reporting on her life experiences, especially in schools.

A small group that is noisy

ARD: Do you see anti-Semitic developments in Germany today that worry you?

Friedlander: It is only a small group among the millions of Germans. You have to consider that. But there are enough that are loud. And the press does it all. This is then pronounced even more. And then there are people who pull other people under their spell. That’s not nice.

ARD: Symbols resembling the Jewish stars from the National Socialist era have been shown at demonstrations against the Corona measures in recent months.

Friedlander: This is awful. Incomprehensible. Where is that? They use him for themselves. It has nothing to do with it at all. It is ridiculous. It’s a shame that people do that. This is our star.

“Young people must not forget what happened”

ARD: Where do you see the greatest threat to an open, tolerant society today?

Friedlander: I am not political. For me it is very important that young people in particular do not forget what happened. Because it can always happen. They should know that not only the Jews were killed. That people got killed. People, because people were not recognized as people. So many husbands and sons died in the war. So many have lost their belongings. Was that good? Was that necessary? War?

ARD: Do you think a relapse into those times is possible?

Friedlander: How much war have we had? Look what is happening in the world. I mean it’s not a good thing. All over. Afghanistan, Yemen, Syria.

But I think I’ve achieved something on a small scale. We have a Margot Friedländer Prize. And students from all over Germany are allowed to write something, even from smaller towns. Things they explored and things they care about. Be it stumbling blocks or what kind of Jewish shops there were in your town. And when there are 60 or 100 students writing, it’s actually nice.

“You have the chance to learn something”

ARD: What do you convey to the school classes you visit?

Friedlander: I always tell the students: My brother Ralph, who was 17 years old, was brilliant. But he didn’t get a chance. you have the chance You have the chance to learn something, to do well in school. Everyone for what he wants to do. A shoemaker is also important. These are people! It doesn’t have to be every doctor or lawyer or anything. Being a good craftsman is just as important. Just be human.