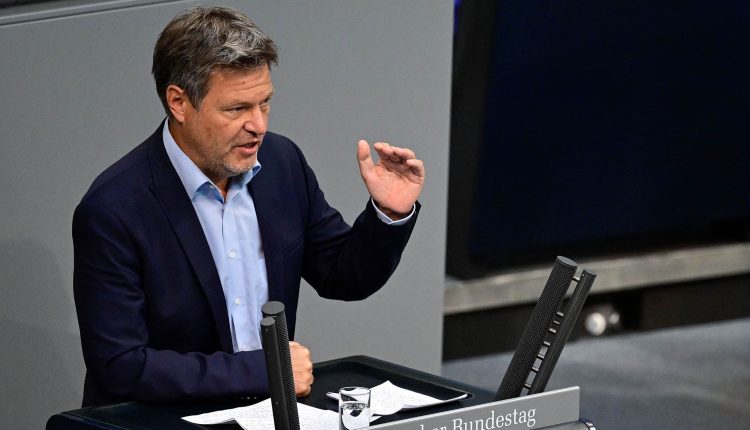 Due to the sharp increase in energy costs, Federal Minister of Economics Robert Habeck has announced extended aid for companies. In the Bundestag he declared that the economic substance in Germany must be preserved and protected. For this purpose, a federal energy cost program should be expanded.

In the future, aid should no longer only go to companies that are involved in international trade, but also to companies that are making losses. That applies to the industry. Aid is also to be expanded for small and medium-sized enterprises. In addition, down payments should be made quickly, said Habeck. The Greens politician explained that the federal government had set up a special fund worth 100 billion euros for national defense. Financial resources must now be mobilized with the same determination to defend Germany’s economic substance.

grants for small and medium-sized businesses

The federal government had launched a program in which companies can receive a subsidy for their increased natural gas and electricity costs. The Ministry of Economic Affairs had already stated that extensions for medium-sized companies were planned. Referring to a survey of medium-sized industrial companies, the Federation of German Industries reported that the industry was facing fundamental problems due to the extreme rise in energy prices.

According to Habeck, the German economy will lose almost 60 billion euros in 2022 because of the purchase of energy from sources other than the previous ones. In the coming year, there could be a loss of almost 100 billion euros, mainly due to the renunciation of Russian energy, explained Habeck at the congress of the Federation of German Industries (BDI). This corresponds to two percent of gross domestic product “calculated over the years”.

Habeck assumes that due to the current energy crisis, further massive financial measures will be necessary. You have to look past reality if you believe that what has been done so far is enough, said the minister.

The Prime Minister of Saxony-Anhalt, Reiner Haseloff, warned in the Bundestag of a wave of insolvencies. He urgently called for a coherent overall concept for overcoming the crisis. At the same time, Haseloff questioned the debt brake in order to be able to react to the challenges. Only in July, however, did the Union faction threaten to sue the Federal Constitutional Court if the government suspended the debt brake to finance relief packages in the coming year.

Within the traffic light coalition in the federal government, there are different views as to whether the debt brake, which has been suspended in recent years due to the pandemic and is anchored in the Basic Law, should be observed again in the coming year. It only allows the federal government to take out new loans to a limited extent. Habeck said it was definitely wrong to risk a wave of insolvencies for a balanced budget “that would tear us down in the next few years”.