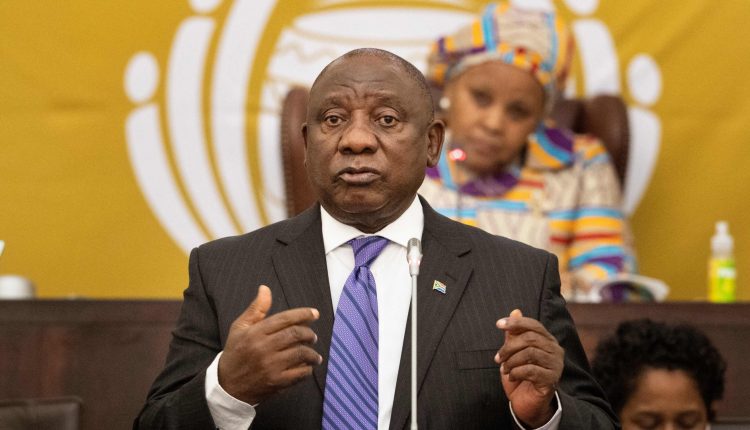 Despite scandals and massive allegations, South African President Ramaphosa has ruled out resigning. He also wants to defend himself against impending impeachment proceedings.

No other topic has occupied South Africa as much as the discussion about President Cyril Ramaphosa in the past few days. The reason is a parliamentary report that was published on Wednesday. According to the report, the ANC leader may have broken anti-corruption rules, although he has always fought nepotism. The party’s highest bodies want to discuss Ramaphosa’s future.

The impetus for the crisis is a mysterious robbery at Cyril Ramaphosa’s big game farm, Phala Phala, in Limpopo, a good two and a half hours’ drive north of Johannesburg. According to Ramaphosa, 580,000 US dollars in cash were stolen there in 2020, the equivalent of a good 555,000 euros. This only became known in June of this year. The circumstances still raise questions because the money was hidden in a couch and is said to have come from the sale of buffalo.

President Ramaphosa has a complex and expensive hobby – is this farm now politically his undoing?

An independent judges’ commission set up by Parliament published its investigative report on Wednesday. The head of state is accused of serious breaches of the law. He is said to have neither reported the large sum of money to the tax authorities nor reported the robbery. He is also said to have kidnapped the thieves. According to the report, he wanted to pay her for her silence so that it would remain secret that so much money was stored on the estate.

The commission alleges that Ramaphosa has a conflict of interest and a violation of anti-corruption laws, and sees enough evidence of presidential misconduct to warrant impeachment. Omry Makgoale, an influential ANC member for decades, warns against it.

“I think Ramaphosa is better than anyone in the last 10 to 15 years. If he has to leave now, it could mean the end of the ANC in the next elections in 2024. We are disappointed, yes, we expected more from him. But if he has to go, I guarantee the country will bleed dry. ANC officials have robbed the country in the past and I believe the state would collapse. That would be a serious crisis, and the country would face the worst.”

Decisions by the party leadership in the coming week

Opposition parties immediately called on Ramaphosa to resign. The ANC said the President himself had agreed to leave. Influential representatives, however, stood behind him and asked to wait for the decision of the party leadership.

That would not be enough, and yet the report comes to a conclusion, says van Heerden. Ramaphosa will likely have this legally reviewed. I believe that the decision will then be made in the ANC crisis meeting. If Ramaphosa gets a lot of support, it could be decided in Parliament that the report should not be pursued any further.”

Cyril Ramaphosa has denied wrongdoing and has repeatedly emphasized that the responsible authorities are investigating the matter. Karam Singh also demands this. He heads the organization Corruption Watch, which is dedicated to fighting corruption.

“In a country that has been plagued for a long period by corruption scandals that have hollowed out institutions, hollowed out the economy and seriously affected service delivery, South Africans deserve answers. It is imperative that the democratic process is allowed to thrive and that no one is allowed to act with impunity.”

Ramaphosa: No resignation because of phala phala

Cyril Ramaphosa’s spokesman, Vincent Magwenya, confirmed yesterday that the President wants to run for a second term and continue his reforms. If he succeeds in being re-elected as leader at the ANC party convention, he could also run in the 2024 presidential election. The party congress begins in just over two weeks, on December 16th.

There is hardly anything left of the spirit of optimism known as Ramaphoria that prevailed when Cyril Ramaphosa took office in 2018. Across the country, people are currently debating the future of the President and South Africa’s economic stability. The financial markets reacted immediately this week. The South African rand fluctuated significantly for a short time, but then recovered.