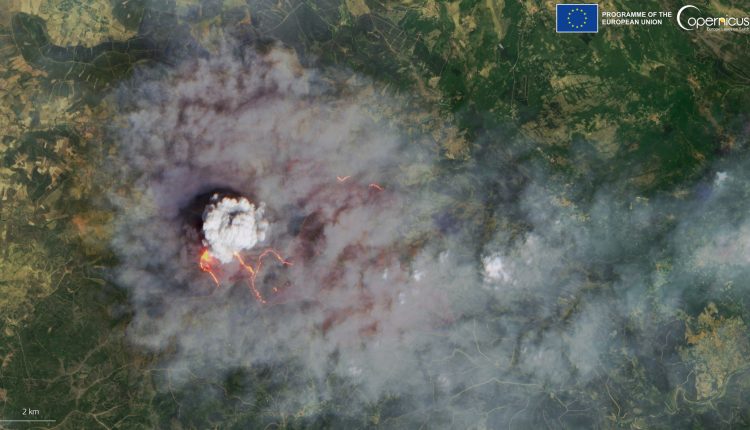 More than six million tons of carbon were released in Europe by the forest fires this summer – according to the EU program Copernicus, a significant increase. The situation has also deteriorated in Brazil.

The numerous forest fires in Europe this summer have led to record emissions of pollutants. Between the beginning of June and the end of August, 6.4 million tons of carbon were emitted in the EU and Great Britain – more than in 15 years. More than 750,000 hectares of land have burned since the beginning of the year, almost three times the usual amount. The data comes from the Copernicus atmosphere monitoring service Cams.

“The combination of the August heat wave and extended dry conditions in western Europe resulted in increased numbers, intensity and duration of wildfires,” the Copernicus statement said. Above all, the fires in southwest France and on the Iberian Peninsula were the sources of the emissions. There they even reached their highest level in two decades.

“Most fires have occurred in places where climate change has increased the flammability of vegetation, such as in south-west Europe, and as we have seen in other regions in other years,” said Copernicus forest fires expert Mark Parrington.

Record number of fires in Brazil too

In other regions of the northern hemisphere, on the other hand, emissions have fallen. In Russia, for example, there were devastating forest fires again this year, but not as bad as in previous years. In the USA, too, the emission of air pollutants from forest fires was lower than in the past two years.

The fires in Brazil were worse than recently. In the state of Amazonas, for example, emissions were well above average in July and August. The responsible Brazilian research institute registered over 31,500 forest fires in August alone, the worst record for this month since 2010.