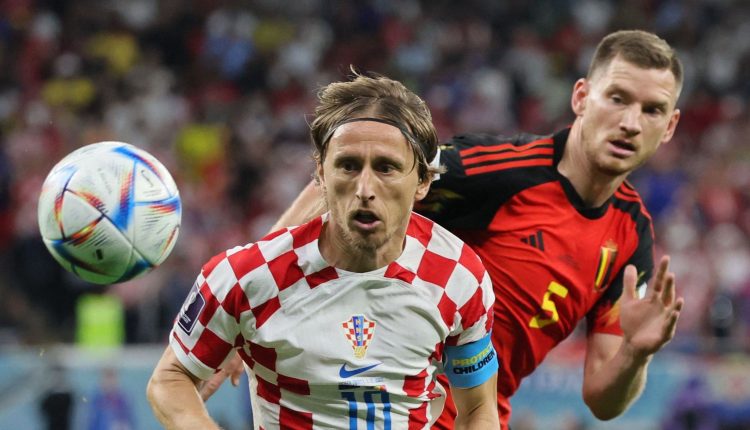 Vice world champions Croatia have reached the round of 16 at the World Cup in Qatar. A goalless draw against Belgium was enough for coach Zaltko Dalic’s team to advance in the third group game. The tournament is over for Belgium’s “golden generation”.

The “Red Devils” finished third with four points behind Croatia and Morocco, who scored one 2-1 win over Canada surprisingly celebrated the group victory. Belgium bid farewell to Qatar with their best performance. In the second half, the 2018 World Cup bronze medalist came very close to making it 1-0 a few times. If the Benelux countries were successful, the Croatians would have had to return home.

Belgium had against after their first two disappointing appearances at the Desert Winter World Cup Canada (1-0) and Morocco (0:2) promised improvement. In a one-hour team meeting, tacheles was talked about. “We weren’t squeamish with each other,” revealed coach Roberto Martinez. The Spaniard himself was not squeamish either – in his personnel decisions. In Eden Hazard, the 49-year-old put his captain on the bench. His brother Thorgan Hazard and Michy Batshuayi also flew out of the starting line-up compared to the Morocco duel.

Amadou Onana, who played well in Qatar, was also suspended, so the “Red Devils” had four new players in the starting XI.

And the personnel shift had a positive effect. The Martinez-Elf left a more compact and cohesive impression than last and also showed themselves to be somewhat improved in terms of football. From the former offensive vortex of the “golden generation” there was not much to see in the first half. But overall, the ball ran more smoothly through the Belgian ranks than in the two previous games.

For example in the 13th minute, when the critical starter Kevin de Bruyne (“We are too old to win the World Cup”) staged Dries Mertens perfectly, the attacker from Galatasaray Istanbul shot well over the goal from a deficit.

It was one of two notable chances in the first half. Croatia’s Ivan Perisic had the first after just eight seconds (!). The shot from the former Bayern pro just missed the post. In the 15th minute, the runner-up world champion already had the lead in mind when referee Anthony Taylor (England) awarded the penalty spot after Yannick Carrasco fouled Andrej Kramaric.

But then the referee was whispered in his ear to look at the previous free kick again. And after viewing the moving images, Taylor correctly revised his decision. Because Dejan Lovren was just offside.

Courtois prevents Belgium from falling behind

Croatia could live with the goalless draw at half-time better than Belgium. Because Morocco led 2-1 in the parallel game against the already eliminated Canadians and thus had seven points on their account at the time, the “Red Devils” had to win to qualify for the round of 16. With the substitution of the battered star striker Romelu Lukaku for the hapless Mertens, Coach Martinez then also tried to liven up his team’s offensive game.

And the 29-year-old also had the first opportunity of the second half after a De Bruyne cross. His header didn’t pose any problems for keeper Dominik Livakovic (48′). At the other end, Mateo Kovacic (50′), Marcelo Brozovic (54′) and Luka Modric (55′) put goalkeeper Thibaut Courtois through his paces.

Just in the urge phase of the “Kockasti” Belgium’s lead almost fell. And again the goal scorer was almost called Lukaku. This time the post prevented the Inter Milan striker’s first Qatar goal (60′). 120 seconds later, the 29-year-old headed a free-standing De Bruyne cross, but missed that chance too.

Martinez stepped up the offensive again and replaced Qatar debutant Jeremy Doku and Youri Tielemans (72′). Captain Eden Hazard continued to foment frustration off the pitch. A bitter fate for the man who had played a key role in shaping the successes of Belgium’s “golden generation” in recent years. The Real Madrid star was only allowed onto the pitch in the 87th minute. Shortly before, Lukaku had awarded the 1-0 again.

The 29-year-old finally became a tragic figure in the last minute of regulation time, when he was denied by Livakovic, who had wickedly undercut the previous cross, after a Thorgan Hazard cross from one and a half meters.

It was the last chance in a game that for many of Belgium’s ‘golden generation’ was perhaps the national team’s farewell show.