Faeser warns against “shaming” in debates about naturalization 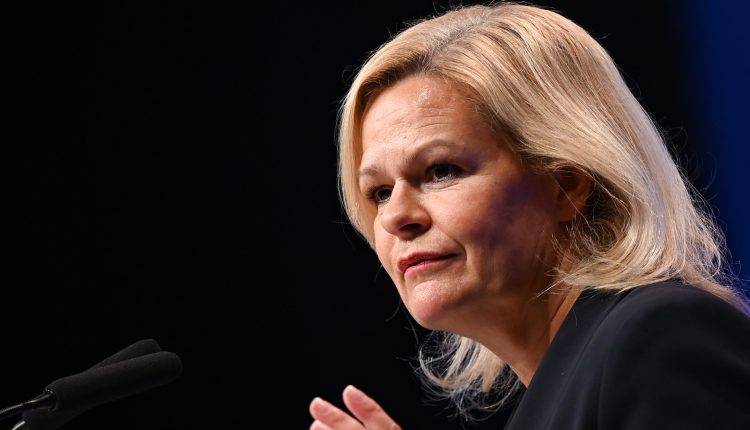 Interior Minister Faeser has defended her plans to reform citizenship law against criticism. She warned against resentments in the debate. The Greens accused the Union of having a dusty worldview.

Plans by the traffic light coalition to reform citizenship law have sparked a controversial debate. Federal Interior Minister Nancy Faeser (SPD) now defended the project in a guest article for the “Tagesspiegel”: The reform was long overdue and “a great opportunity to strengthen our social cohesion”.

She warned against resentments in the discussion about citizenship law. Many people were “deeply hurt” by the fact that the debates in the past were often characterized by “sentiment mongering”, wrote Faeser. That doesn’t do justice to a modern immigration country.

Faeser wants to “accept multiple nationalities in the future”

Among other things, Faeser plans that in future foreigners will be able to obtain citizenship after only five years of residence in Germany instead of the previous eight years. In the case of “special integration achievements” this should even be possible after three years. “Achievement should be worth it,” explained Faeser.

The interior minister defended the planned move away from the principle of avoiding multiple nationalities. The previous practice prevents the naturalization of many people who have lived in Germany for decades and are at home here. “With the reform of nationality law, we are therefore introducing a paradigm shift and will accept multiple nationalities in the future,” wrote Faeser.

Merz expresses reservations about the reform

Sharp criticism of Faeser’s plans had come from the Union in the past few days. CDU leader Friedrich Merz also said in Report from Berlin caveats. In his view, dual citizenship should be “not the norm, but rather the exception”. German citizenship is something valuable that needs to be handled with care.

The possibilities of immigrating into the labor market have been expanded in recent years, Merz continued: “What we have to prevent is immigration into the social systems, and if that is the goal of the coalition, then of course we will not agree to it.”

The Greens, on the other hand, accuse the Union of having a dusty worldview. Filiz Polat, Parliamentary Secretary of the Greens parliamentary group, said: “Germany is a country of immigration, and it is high time that we took this into account. In the coalition agreement, we set ourselves the goal of introducing modern citizenship law in Germany, and we are now implementing that. ”

Polat went on to say: “In the future we will enable naturalization earlier – as an expression of a modern immigration country.” What can be done here after years of blockade by the Union in the federal government is massive. The Union’s “dusty world view” is lagging behind social reality and a modern society. “More than 20 years after the Union’s unspeakable ‘double passport’ campaign, naturalization will finally be possible for everyone, accepting multiple nationalities.”

On Monday, Minister Faeser wants to attend the “Germany. Immigration Country” event together with Chancellor Olaf Scholz (SPD) and talk about the reform there.