Europa League start: a strong quarter of an hour is enough for Freiburg to win 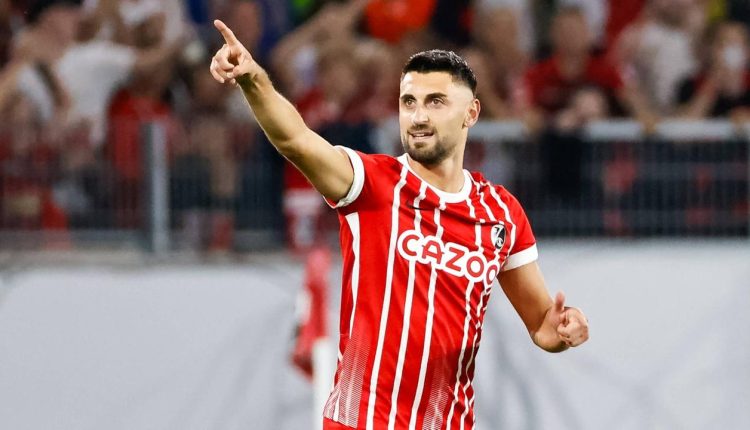 At the start of the Europa League, SC Freiburg narrowly beat Qarabag Agdam. After a strong start, however, the Breisgauer lost the thread.

Freiburg got off to a good start, had the first promising shot by Maximilian Eggestein after just 23 seconds and became dangerous again just a minute later through Ritsu Doan. The sports club forced the early goal and got it. Because after an alleged collision between Tural Bayramov and Matthias Ginter, the Belgian referee Erik Lambrechts was called for video evidence and then decided on a penalty. Vincenzo Grifo didn’t give Qarabag keeper Sharudin Magomedaliyev a chance (5′).

Qarabag relied on pressing. But coach Christian Streich’s team was always able to break free with quick, precise passes and used the resulting space for their own attacks. In the 9th minute, Doan pulled away from keeper Magomedaliyev, but didn’t give the 28-year-old a chance a little later. After speed dribbling in Arjen Robben style, he left left-back Bayramov and shot in the bottom left to make it 2-0 (15′). After that, Freiburg took it easy, letting the ball and opponents run – but without the determination of the first quarter of an hour.

It was more than half an hour before Abdellah Zoubir made Qarabag a threat for the first time. Sport-Club goalkeeper Mark Flekken was able to parry the Frenchman’s tight long-range shot (33′). However, Freiburg then became careless and let Qarabag come back into play: Maximilian Eggestein frittered away the ball in front of his own penalty area. The Montenegrin Marko Vesovic used the sudden free space to score (39th). The ball wobbled and Flekken’s view was somewhat blocked; nevertheless, the 29-year-old Dutchman didn’t seem very confident in this situation. With the 2:1 we also went into the break.

Freiburg under pressure after the break

In the second half, Qarabag pushed for an equalizer. However, Flekken, who reacted well this time, was able to prevent Owusu Kwabena’s chance a few seconds after the restart (48′). Freiburg was able to use the space behind the now more offensive Azeri for counterattacks. However, Freiburg were often too imprecise to develop a real goal threat. However, Nils Petersen (64′) and Vincenzo Grifo (70′) were unable to take advantage of Freiburg’s few chances. In return, the Brazilian Kady tested the Freiburg goalkeeper with a shot from a tight angle. However, Flekken was not surprised again. Flekken was there again for Zoubir’s header (80′).

So it ended up being a somewhat fortunate 2-1 win at the start of the Freiburg Europa League season. In the coming week (September 15, 2022, 6:45 p.m.) SC Freiburg has to play at the Greek club Olympiakos Piraeus.