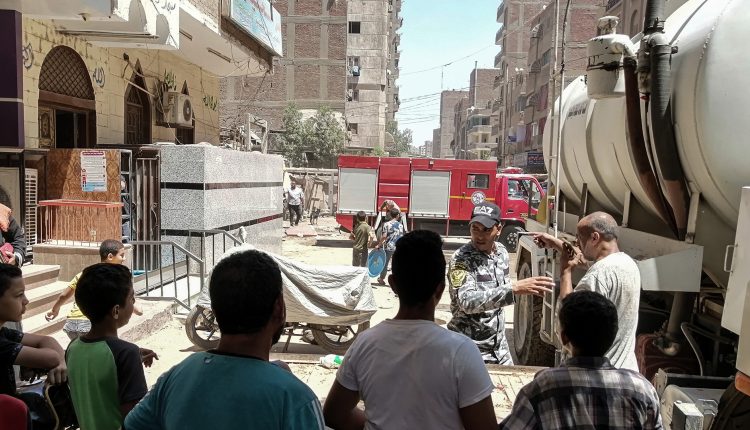 A fire in a Coptic church has claimed the lives of many people. The flames surprised the faithful during a service. The faith community is in shock.

The shock is still written all over the faces of the people near the Coptic church in the Imbaba district: “I heard screams and shouting,” says local resident Seif Ibrahim. “We tried to put out the fire with buckets of water. The young men pulled their T-shirts over their faces and ran into the building to save as many women and children as possible.”

“The fire spread throughout the church within minutes,” reports helper Mahmoud. “Two people jumped out the window. We put a blanket on one of them as a jumping sheet, but he still hit the ground and we couldn’t save him.”

The cause of the fire was probably an overheated generator

On Sunday morning, blazing flames erupted from the apartment building that had been converted into a church, just during a well-attended service. Apparently a technical defect in the air conditioning system, according to authorities – an overheated generator that operated the air conditioning system is said to have burst into flames. Among the dead are numerous children who were cared for on the upper floor during the fair – that’s where the fire apparently broke out first.

Youssef was one of the first helpers in the building. The young man with the baseball cap fights back tears: “There were so many children, the scene was horrible. So many children,” he says. “I grabbed one kid and took him outside. And then the next one. We may have saved 15 but there were so many. I found a little kid, maybe two years old, unconscious. I’m so sad. They were all unconscious, I can’t tell who was alive and who had already died.”

The accident happened in the working-class district of Imbaba, not far from downtown Cairo. A very poor district, in which the houses are close together – sometimes the streets are even too narrow for ambulances. Devastating fires have repeatedly occurred in such areas of Cairo in the past, because the fire can quickly spread from one house to the next – and the buildings, some of which were built illegally, have no emergency exits or fire escapes.

“There are tens of thousands of these churches in densely populated neighborhoods,” said Ashraf Al Ashry, editor-in-chief of Egypt’s Al Ahram newspaper. “Reaching these buildings is very difficult for helpers. We now need analyzes of the status of these old churches, which have had little or no protection.”

Some of the dead were buried that evening. Egyptian President Abdel Fattah al-Sisi sent condolences to the families of the victims and promised generous compensation payments. In the coming days, a commission of inquiry will find out what actually caused the fire. “The condition of churches like this is now being investigated,” said the head of state. “What happened here is a wake-up call for all Egyptians, including the state authorities. This horrible accident shows that we urgently need new regulations and laws in the coming hours and days.”

In Egypt, about ten percent of the population are Coptic Christians. The religious minority repeatedly complains about disadvantages. For example, stricter rules apply to the construction of churches than to the construction of mosques, it is said. Therefore, simple residential buildings are often converted into churches – without appropriate safety standards. After several attacks on believers in recent years, security checks at church services have been significantly tightened. However, electrical engineering in particular is completely outdated in many places in Egypt.