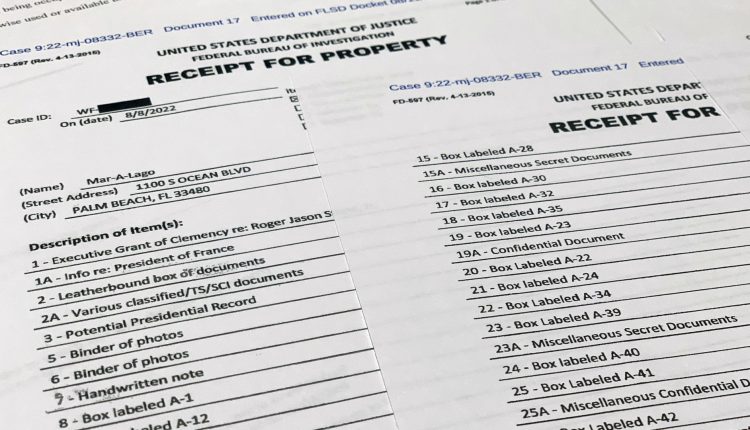 After the house search of former US President Trump, published documents now show what the FBI confiscated – including top secret documents. Did Trump violate the US espionage law?

The week began with headlines about former US President Trump. And that’s how it ended. The breaking news came in the evening: The FBI secured several top-secret documents in Mar-A-Lago. That’s according to a list released Friday by a federal judge showing what FBI officials took during their search.

Top secret, that is, top secret. The journalist Sadie Gurmann from the Wall Street Journal, which had the information first, explains what that means on the television network PBS.

Classification refers to things like military secrets, defense secrets, information critical to our national security interests. So nuclear information, for example, will certainly be classified at that information level.”

FBI searches Trump home for official documents from his tenure

The Washington Post newspaper found out this week that the documents could contain information about nuclear weapons. However, it is unclear whether this is true. Details on the exact content of the documents are not yet known even after the search warrant was published.

“The search warrant itself doesn’t detail what’s in those boxes,” says Sadie Gurmann. But: “It offers some tantalizing insights into what investigators are investigating and what will keep them busy for the next few weeks.”

The search warrant is also revealing in other respects. He names three criminal laws that form the basis of the investigations against the ex-president. Among other things, Trump could have violated the Espionage Act. However, the possible violation of a so-called Disability Act is more important among experts – that is, when someone deliberately prevents a federal agency from doing its job. Is it getting tight for Trump now?

No charges may be filed. But who knows. There may also be criminal prosecution. We just don’t know.

Says Alberto Gonzales, a former US Attorney General on CNN.

Will there be charges?

US Attorney General Merrick Garland is known for being very cautious. He would only press charges against Trump if he had a very good chance of success.

In any case, this case has what it takes to get Trump into trouble, says another legal expert, lawyer Renato Mariotti, on PBS.

If they do press charges, that’s far more plausible and, frankly, stronger than many of the claims being made about the former president.