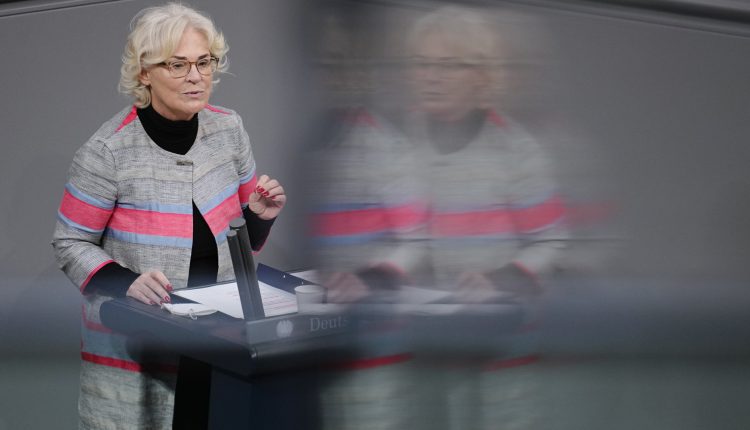 The conflict with Russia was also discussed in the Bundestag: Defense Minister Lambrecht warned of the consequences of an attack on Ukraine. But she left out one sensitive issue.

This week was the hour of diplomacy. It was many hours of diplomacy, to be precise: the United States, NATO and the OSCE sat down with envoys from Moscow in numerous sometimes nerve-wracking meetings. But the danger of a Russian invasion of Ukraine does not seem to have been averted.

The German government is also alarmed: “Every Russian attack on Ukraine will have consequences.” The new defense minister addressed this clear warning to Russia. And Christine Lambrecht also emphasized in her speech in the Bundestag: “The Russian deployment on the Ukrainian border violates all the rules of peaceful coexistence.”

In view of the threat situation, the SPD politician obviously did not want to be accused of being too soft in tone. After all, her party is often criticized for being overly accommodating towards Moscow.

Greens: “We mustn’t allow ourselves to be offered”

However, the coalition partner from the Greens is a bit sharper in tone: “If autocrats want to push through their geopolitical power interests with human rights violations, with military aggression and with extortion maneuvers, as we see it from the Kremlin leadership in Ukraine, then that’s not the case in our interest, we can still put up with it,” said the Greens’ defense politician Agnieszka Brugger.

The minister was quite clear in her tone – but is she the same on the matter? Lambrecht did not address the sensitive issue of Nord Stream 2 in her speech. From her party, the SPD, there had recently been voices that the gas pipeline should not be mixed up with the Ukraine conflict – from Secretary General Kevin Kühnert, for example.

The Greens, on the other hand, are openly questioning Nord Stream 2 again because of the Putin threat. The Left Party criticizes the government’s polyphony: “Anyone who acts so inconsistently and contradictorily shouldn’t be surprised that he doesn’t come into question as the first person to talk to,” says left-wing politician Ali Al-Dailami.

Talks without the Europeans

He raised another issue that was sensitive for Germany and Europe: the fact that Putin preferred direct talks with the United States – without Europeans at the table – and got them. The Federal Government is now trying to downplay the impression that the fate of Germany and the EU was being negotiated over their heads. “In the NATO-Russia Council – which finally, finally took place again – in the OSCE, wherever talks are held, we Europeans have a strong voice,” says Minister Lambrecht.

Critics of the EU accuse that this European voice is neither unanimous nor supported by military strength and that is precisely why it is often ignored.

Also noticeable in the Bundestag debate: the attempt to demonstrate unity within the traffic light coalition. Lambrecht and the chairwoman of the defense committee, Marie-Agnes Strack-Zimmermann (FDP), unanimously rejected Russia’s demands that NATO should rule out the admission of Ukraine, for example: “Mr. Putin, the European security structure is non-negotiable. Each country decides for itself which one cooperation it seeks.” So Strack-zimmermann to the address of the Russian President.

It is also clear that the federal government – as well as NATO and the EU – is counting on further talks at the end of the round of talks: Foreign Minister Annalena Baerbock is traveling to Kiev and Moscow on Tuesday. Ultimately, however, it will be decided in Moscow whether the so much invoked thread of conversation will really be continued or whether it will be abruptly cut short.

Warning instead of the all-clear – after Russia talks