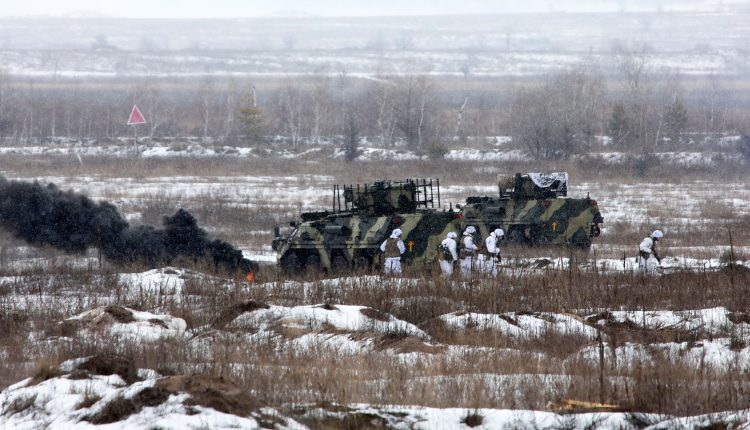 Before Chancellor Scholz’s visit, the Ukrainian ambassador urgently appealed to the federal government to supply his country with 12,000 anti-tank missiles. A war is “more and more inevitable”.

Melnyk explained that Scholz’ trip to Kiev on Monday and Moscow on Tuesday could be “the last chance” for a diplomatic solution to the Ukraine conflict. He reiterated: “The situation is dramatic. We have the feeling that war is becoming more and more inevitable.” His government is preparing for the “worst scenario”, namely “that the capital could possibly be bombed in the next few days”. When it comes to aircraft and ships, Russia is superior to Ukraine: “We’re really easy prey there” for Russian President Vladimir Putin.

The federal government refuses to supply deadly weapons to Ukraine. However, it is examining whether to make armaments available below this threshold.

Despite diplomatic efforts, there is no relaxation in the Ukraine conflict

Federal Foreign Minister Annalena Baerbock (Greens) also warned of a “precarious situation”. “We are trying through all channels to keep Russia at the negotiating table,” she said daily topics.

Federal Finance Minister Christian Lindner (FDP) reiterated the federal government’s threat of sanctions against Russia in the “Handelsblatt”: “The Kremlin should not be subject to the misconception that it can cross political and territorial borders without paying a high price,” said Lindner. “The commissioning of a pipeline is only one aspect,” he added, referring to the controversial German-Russian gas pipeline Nord Stream 2.

The FDP chairman defended that Scholz is not explicitly threatening the end of Nord Stream 2. “The worst deterrent is the announcement of measures that an opponent can tactically prepare to circumvent,” said Lindner.

After a phone call with Kremlin chief Vladimir Putin on Saturday, US President Joe Biden has now also spoken to Ukrainian President Volodymyr Zelenskyy. The White House then said that Biden had again emphasized the US commitment to Ukraine’s sovereignty and territorial integrity. The United States and its partners would respond quickly and decisively to any Russian aggression against Ukraine.

The US government is warning of an impending Russian invasion of Ukraine with increasing drama. Selenskyj had recently been irritated by the alarming tones from Washington and warned against fomenting panic. That only helps the enemy.

So far no breakthrough in talks

Biden spent the weekend at Camp David, the country home of the US presidents in the state of Maryland. On Saturday he called Putin from there, warned the Russian president against an invasion of Ukraine and once again threatened serious consequences. The conversation did not bring a breakthrough in the crisis.

The foreign and defense ministers of both countries had also phoned each other. In addition, French President Emmanuel Macron picked up the phone and spoke to Scholz and Selenskyj. In addition, in a telephone call to Putin, he again warned of the possible consequences of Russian aggression.

In view of the deployment of tens of thousands of Russian soldiers on the border with Ukraine, the US government warned on Friday that Russia could possibly attack the neighboring country before the end of the Winter Olympics on February 20. The Kremlin has vehemently denied such allegations.

According to Moscow, in his talks with Biden, Putin complained that western states were not putting the necessary pressure on Ukraine to fulfill its obligations under the so-called Minsk peace plan for eastern Ukraine.

The extent to which the federal government will comply with Kiev’s wishes is unclear. In addition to the political decision, it is also about the actual availability of this material, which is also used by the Bundeswehr itself, according to government circles.

The situation is that “there is nothing left in the Bundeswehr at the moment. There are not a thousand night vision devices lying around that are not needed,” quoted the AFP news agency from government circles. Scholz is unlikely to make any commitments on his first visit to Kiev.

The situation is different with further economic aid, which is also being demanded by Ukraine. In view of the political turbulence, the Ukrainian currency is under pressure. Germany is therefore examining “whether we still have bilateral opportunities to make a contribution to economic support”. Details were not given.

Scholz calls on Russia to de-escalate

Biden under pressure: What’s happening to the Chinese balloon?