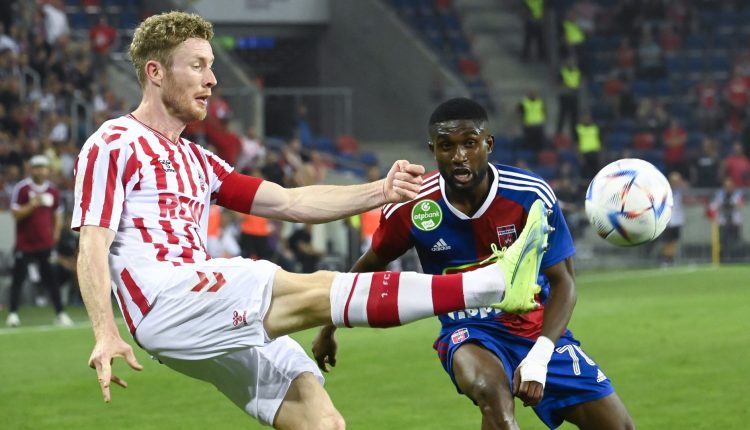 In the playoff second leg of the Conference League, 1. FC Köln have bought their ticket for the group stage. Cologne dominated, but only two corners broke the Fehérvár defense. Bitter: Coach Steffen Baumgart saw red late.

On Thursday evening (08/25/2022) the football club from the Rhineland prevailed 3-0 (1-0) in Hungary. He had the first leg 1. FC Cologne still lost 1:2 outnumbered. In the second leg, Cologne controlled the action.

The first two goals came from corner kicks by Florian Kainz: Timo Hübers headed the FC lead (10′), Ellyes Skhiris increased (46′). Joker Kingsley Schindler made everything clear (90 + 4). Coach Baumgart watched the last goal from the stands because he had previously been upset about a referee’s decision (90′).

Schwäbe: Plane to Cologne “may tremble”

“The whole club has achieved something, we might only realize that tomorrow, the day after tomorrow,” said Baumgart on “RTL+” after the final whistle. “When I’m in the dressing room, I’ll probably slump down and become very calm.”

Goal scorer Hübers was impressed by the numerous Cologne fans who had traveled there. “We didn’t allow much, we played a great game.” And goalkeeper Marvin Schwäbe indicated with a view to the return trip: “The plane can tremble.”

Under the pressure of bankruptcy in the first leg, the 1. FC Cologne no doubts about their own motivation to want to turn the tide against the Hungarians. After a tough first few minutes, the Cologne advantages played out. Fehérvár was busy working off the ball, waiting for moments to switch.

The first set piece resulted in the opening goal: Kainz’ corner kick found the head of defender Hübers, who hit the ball hard. Host goalkeeper Dániel Kovács was still there, but couldn’t prevent the impact.

It was a patience game for the dominant Cologne. The Hungarians stuck to their defensive approach. Because Fehérvár was low, some through balls from FC were intercepted early.

But some just got through: Kainz failed from the edge of the penalty area to Kovacs (39th). The Austrian’s attempt was preceded by a long ball.

The FC continued to increase the number of strokes. Cologne also benefited from a dream start in the second round. Skhiri got the ball passed on by Kristian Pedersen after another sharp Kainz corner kick at the near post, at the far post Skhiri decided to take it directly. And hit the corner.

Until then, FC goalkeeper Marvin Schwäbe had hardly been challenged. But suddenly the goalkeeper had to save his team the group stage with a brilliant act. When the hosts were under pressure, Budu Zivzivadze aimed the ball at the Cologne goal from the six-yard box. But Schwäbe was down at lightning speed (61st).

Baumgart was sent off later

In the meantime, Cologne lost control of the game because they had previously missed the decision with a third goal. Cologne caught themselves, put the pressure on themselves again and Florian Dietz missed the possible 3-0 from close range (83rd).

In the end, however, FC took the lead comfortably because Schindler headed in for the third goal. The only blemish: Coach Baumgart was too upset about a throw-in situation decided by Fehérvár for the liking of referee Ali Palabiyik and had to go to the stands.

Cologne demanded against Stuttgart in the Bundesliga

Due to the international commitment, FC will not continue in the Bundesliga until Sunday (3.30 p.m.). Then VfB Stuttgart is a guest in Cologne-Müngersdorf.