Climate protest at BER: sharp criticism of the airport blockade 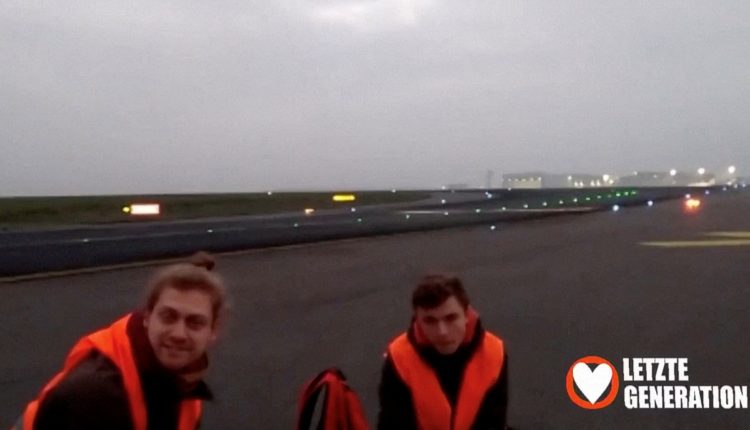 Unacceptable, unscrupulous, counterproductive – the parties are largely in agreement in their assessment of yesterday’s blockade of the capital’s airport by climate activists. The demonstrators are faced with several ads.

The temporary blockade of Berlin-Brandenburg Airport (BER) by climate activists from the “Last Generation” group has been sharply criticized across party lines. Blocking the capital’s airport is “another escalation and absolutely unacceptable,” wrote Federal Interior Minister Nancy Faeser (SPD) on the short message service Twitter. “These actions destroy important societal acceptance for the fight against climate change.”

Federal Transport Minister Volker Wissing said that the right to demonstrate is a fundamental right. But the actions of the group “Last Generation” were becoming “more and more unscrupulous”. Through a spokeswoman, the FDP politician explained: “Society cannot accept such behavior.” The rule of law, on the other hand, must “take decisive action”. FDP General Secretary Bijan Djir-Sarai also said that protest actions of this kind were “completely illegitimate”. The “full hardness of the rule of law” must take effect, he told the news portal t-online.

The deputy leader of the Greens in the Bundestag, Konstantin von Notz, criticized the action as “counterproductive, presumptuous and potentially dangerous”. In addition, von Notz sees a need to catch up on the security concept of BER. “It will have to be checked carefully,” he said on t-online, “how the activists could manage so easily” to get onto the BER runway.

Union parliamentary group Vice President Andrea Lindholz (CSU) sees “another red line” crossed with the impairment of air traffic at BER. Airports are “not a stage for political action,” explained Lindholz, because “human lives could very quickly be endangered there.” She called for “consistent penalties” for the disorder. CDU General Secretary Mario Czaja told t-online: “The rule of law knows the necessary instruments to defend against such crimes. They must now be used consistently: preventive detention, bans on residence, fines.”

AfD calls on the protection of the constitution to act

AfD party and faction leader Tino Chrupalla called on the Office for the Protection of the Constitution to become active in the case of the “last generation”. Not opinions, but actions should be decisive for its evaluation. “Securing critical infrastructure must have top priority,” said Chrupalla. Left leader Martin Schirdewan, on the other hand, told t-online that the actions of the climate protest group were controversial, “but they also put their finger on the wound of political inaction in the face of the climate catastrophe”.

A spokeswoman for the airport association ADV said there was no understanding of the protest actions. “It is unacceptable if air traffic safety is jeopardized.”

According to the federal police, two groups had gained access to the BER airport site on Thursday afternoon. Some people glued themselves to the ground. The “Last Generation” announced that some activists rode bicycles across the site. The action was streamed live on Twitter.

The airport alarm was raised and air traffic was suspended until further notice for security reasons. Operations resumed after 90 minutes. In the meantime, 15 incoming flights had to be diverted – to Leipzig, Dresden and Düsseldorf. Five flights could not take off from BER, other aircraft were circling in the air. Delays continued hours after the incident. According to the airport, around 3,000 to 4,000 passengers were affected.

The police took the demonstrators into custody. They are to be reported, among other things, for dangerous interventions in air traffic, for trespassing and property damage.

The incident at Berlin-Brandenburg Airport will be evaluated in the next few days together with the federal police. Airport spokesman Jan-Peter Haack said that it would then be decided whether further security measures would have to be taken.

People were never endangered because the climate demonstrators did not step onto the runway and demonstrated far away from the terminal.

With information from Juliane Kowollik, RBB

A lot of criticism of climate activists after the airport action