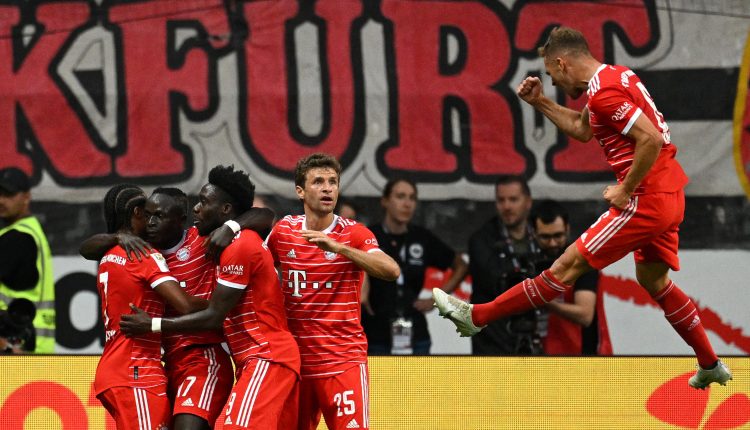 FC Bayern Munich has made a perfect start to the new Bundesliga season. The record champions clearly won at Eintracht Frankfurt.

Europa League winners versus champions on Matchday 1. Quite a few had predicted a difficult and complicated start for Bayern in Frankfurt and even believed that Eintracht was capable of a surprise.

But things turned out differently. Bayern beat the Hessians 6-1 in a frighteningly sovereign manner. The game was already decided at the break. In front of 51,500 fans in the Frankfurt Arena, Joshua Kimmich (5th), Benjamin Parvad (11th), the outstanding Sadio Mané (29th), Jamal Musiala (35th) and Serge Gnabry (43rd) scored the goals for Munich. Randal Kolo Muani ensured the cosmetic result after the break (64th). Musiala (83rd) set the final point.

Winning eleven from the Supercup on the pitch

At Bayern, star newcomer Mané was in the starting XI and formed the double lead together with Gnabry. Coach Julian Nagelsmann trusted the winning team from the Supercup against RB Leipzig (5:3). The other newcomers Matthijs de Ligt, Ryan Gravenberch, Noussair Mazraoui and Mathis Tel were all on the bench at the start.

Ex-Munich Mario Götze played for Frankfurt from the start on his Bundesliga comeback. Captain Sebastian Rode replaced the Japanese Daichi Kamada in defensive midfield. Otherwise, coach Oliver Glasner trusted the players who had started in the 4-0 victory in the DFB Cup at second division club 1. FC Magdeburg.

The stadium for your ears: The live football reports from the sports show

The start was furious, especially the memorable first half makes you want to start the 60th season of the Bundesliga. Bayern put Eintracht under pressure from the start. Kimmich outwitted Frankfurt goalkeeper Kevin Trapp in the fifth minute. The national player cheekily took a free kick from the right half-field to the near post, Trapp and the Frankfurt defense had counted on a cross. The goalkeeper took a long time, but couldn’t get close.

The 2-0 also came from a standard situation. Eintracht couldn’t clear a corner from the right, the ball fell in front of Pavard’s feet in the penalty area, and he didn’t miss this chance.

After that, the Frankfurters partially defended wildly. This was initially used by Mané, who scored with a header after a quick attack from nine meters. A little later, Mané and Thomas Müller performed magic in the penalty area, Musiala made it 4-0, before the break Gnabry increased it to 5-0 – again after winning the ball and switching quickly.

It wasn’t the case that the poor Hessians didn’t stand a chance, but unlike Bayern they didn’t score. After a corner, Tuta hit the crossbar of the Bayern goal with his head. National goalkeeper Manuel Neuer would not have had a chance. Jesper Lindstrøm later rounded four Bayern players with luck and skill, but clear in front of Neuer he pushed the ball just wide of the goal.

With 0:5 at the break but still well served

On the other hand, the Frankfurters were lucky that the break was only 0:5. Thomas Müller stumbled the ball on a spotless counterattack via Gnabry, Musiala only hit the side netting. All in all, furiously playing Bayern hit aluminum three times in the first half.

After the break, the Frankfurters concentrated mainly on the defensive, but then became more and more courageous, without losing control like in the first round. Bayern shifted down a gear or even two.

This is how Eintracht scored a goal – with the kind help of Bayern goalkeeper Neuer. He frittered away the ball outside his penalty area in a duel with Randal Kolo Muani, and the striker only had to push in from 18 yards out. In the 69th minute, Ansgar Knauff only scored the outside set after a fine individual performance, Kolo Muani almost scored his second goal.

Otherwise the game splashed away in the second half. Glasner had already brought in three fresh players at the break, and Nagelsmann also made lively changes. In the 74th minute, Trapp was able to excel again in a one-on-one against Mané, but then it was Bayern Munich in the form of Musiala who put the end to it.

Eintracht Frankfurt travels to Hertha BSC on the 2nd matchday on Saturday (08/13/2022), FC Bayern plays against VfL Wolfsburg on Sunday.