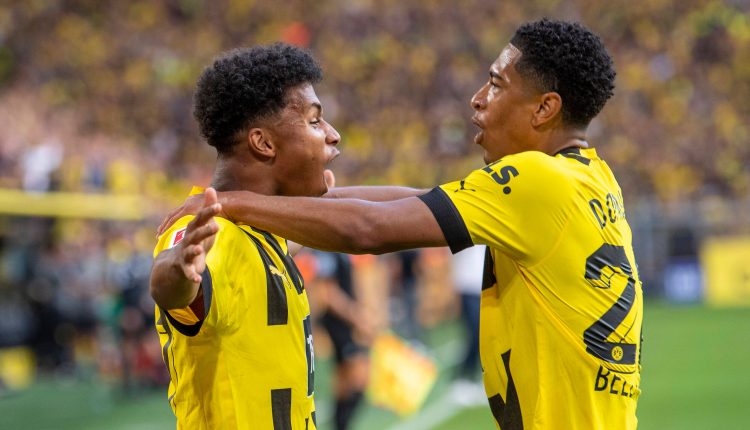 Borussia Dortmund won the first hot duel of the new season against Bayer Leverkusen on Saturday evening (06.08.22) under their new old coach Edin Terzic. BVB beat the Werkself 1-0 on matchday 1 of the Bundesliga.

Marco Reus gave Dortmund the lead in the tenth minute. Even if Bayer celebrated twice in vain: It was the goal of the day in the Westfalenstadion, which was filled with more than 80,000 spectators.

“We made a big step forward. The team worked incredibly hard for the win. They fought, scratched and bit. That’s what people want to see here,” said Dortmund’s sporting director Sebastian Kehl. On the other hand, Leverkusen’s Jonathan Tah was disappointed: “It was relatively balanced in terms of chances. It’s a shame we didn’t take anything with us.” You have shown a different face than in the cup against Elversberg.

Adeyemi prepares leadership – and has to go down

The game was fiercely contested from the start, at least one of the players involved went down in almost every duel, FIFA referee Dr. Felix Brych had his hands full. However, there were no rough or unfair fouls – but two players had to leave the field early on. On the Leverkusen side, Robert Andrich had to leave the field (13′), a little later Karim Adeyemi was unable to continue after a challenge for the hosts (23′).

At this point, Dortmund had already taken the lead – mainly on the initiative of Karim Adeyemi. After a pass from Yousoufa Moukoko, the Germany U-21 international took a powerful shot from the inside right. Lukáš Hrádecký in the visitors’ box saved the low shot, but the ball tumbled down the goal line. Marco Reus switched the fastest and poked the ball into the net.

Edin Terzic: “The goal is a classic BVB goal”

Bayer significantly stronger after the break

After the break, Gerardo Seoane’s team was more focused and determined. The visiting fans immediately had the goal scream on their lips when Exequiel Palacios placed a rebound in Gregor Kobel’s goal (53′). But the shooter was just offside when Patrik Schick shot on goal. Shortly before that, Hrádecký had brilliantly kept Leverkusen in the game against Hazard.

Stadium for the ears: live football reports from the sports show

Borussia had long since lost their superiority from the first section at this point. The guests pressed for the equaliser, but Schick failed twice at BVB keeper Kobel (64th/69th). Leverkusen really wanted the draw, but Dortmund defended their narrow lead with skill and fortune.

Lukáš Hrádecký: “I don’t know if that’s the right rule”

In stoppage time, goalie Hrádecký saw a red card according to video evidence because he picked up the ball with his hands from outside the 16-metre box in front of the onrushing Thorgan Hazard. Edmund Tapsoba had to go into the box as a substitute, but Reus was unable to score the free kick due.

Towards the end of the game, the stadium visitors were asked via the scoreboard and the short message service Twitter not to leave the stadium. The reason is a vehicle that was found in parking lot E3 with the engine running. The warning was lifted almost half an hour after the end of the game. The engine of the car is said to have been running due to a technical defect, and the vehicle did not pose any danger.

Dortmund travels to Freiburg on the second matchday on Friday (08/12/2022), Leverkusen plays against Augsburg on Saturday.