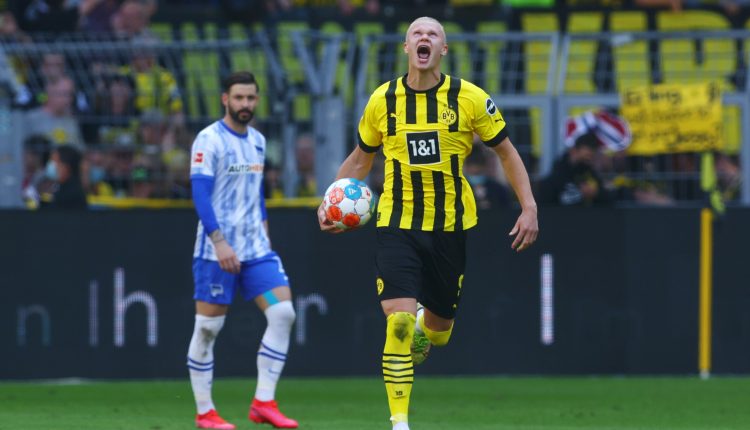 Hertha BSC has to tremble for staying in the Bundesliga. After a 1:2 (1:0) defeat on the last matchday at Borussia Dortmund, Berlin has to go into relegation.

Berlin penalty on the monitor

BVB started the game in a dominant manner and mostly had the ball, but were unable to assert themselves decisively against Hertha’s strong defenders. And then things suddenly got exciting in the Dortmund penalty area. After a foul by Dan-Axel Zagadou on Belfodil, according to the video images, Berlin received a penalty. The fouled started himself and scored the lead (18th).

After that, nothing changed in the course of the game. Dortmund let the ball circulate and settled into the Berlin half, but BVB never pushed into the penalty area. Hertha keeper Marcel Lotka only had to intervene for the first time in injury time in the first half. A Zagadou cross grew longer and longer and would have landed in the far corner had it not been for the 20-year-old, who hit the post.

It was a one-sided game, Dortmund had more than 70 percent possession. But Hertha won almost 55 percent of the duels and, above all, almost all the important ones. It was obvious that Berlin was about staying up, while it was already clear that BVB would end the season in second place.

However, the team coached by Marco Rose was still keen to make this last game of the season a success. After 44 years at the club, sports director Michael Zorc said goodbye before the game, as did ex-captain Marcel Schmelzer, who had worn the BVB jersey for 17 years.

Hertha’s tactic works – but then breaks down

But Hertha coach Magath found the means to spoil the farewell party for the Dortmund idols for the time being. His team fought for every centimeter and showed exactly the virtues that are needed in the relegation battle. But Hertha couldn’t prevent everything. And so it also took a bit of luck for Marco Reus to miss the greatest chance to score (52′) in front of Lotka.

Völler and Zorc: The farewell of two legends

Haaland also had the Berlin defensive well under control. The Norwegian, who will play for Manchester City next season, only had his first goal in the 62nd minute, but missed the opponent’s goal by a wide margin. But then, thanks to the video evidence, Haaland had an even better chance of scoring his farewell goal. Marvin Plattenhardt grabbed the ball in the Hertha penalty area and there were penalties – which Haaland converted to make it 1-1 (68th).

Dortmund was now pushing for victory, Hertha could hardly free itself from the embrace of the hosts. Berlin seemed tired in the first 70 minutes due to the relentless struggle, further BVB goals seemed only a matter of time.

Haaland missed opportunities to make it 2-1 with a header in the 74th and 76th minute. But then youngster Moukoko ensured Dortmund’s redemption. With his first touch of the ball, the BVB striker, who had just come on as a substitute, made it 2-1 (84th). Shortly before the end, Stevan Jovetic missed the chance to equalize and save Berlin (90th).