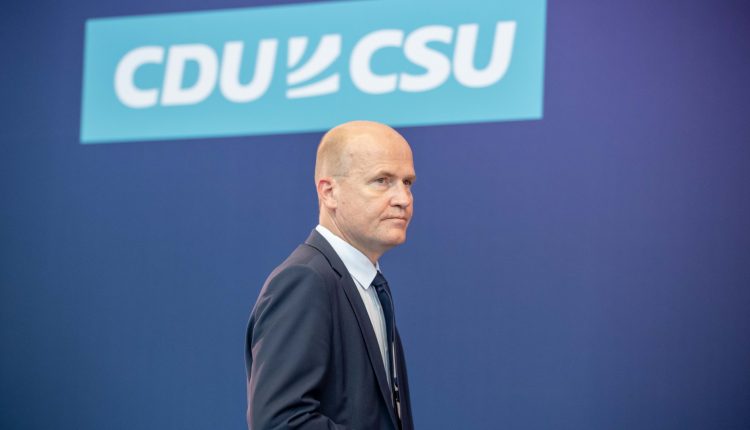 Union faction leader Brinkhaus waives after ARD-Information in favor of the future CDU chairman Merz on a renewed candidacy. With this step, he wanted to avert damage to the party, Brinkhaus explained in a letter.

According to information from Ralph Brinkhaus ARD Capital Studios in favor of the designated CDU chairman Friedrich Merz to the presidency of the Union faction in the Bundestag. After a conversation with Merz, he decided to take this step.

Brinkhaus declared his waiver in a personal letter to the members of the CDU/CSU parliamentary group. With this decision, he wants to avert damage to the party, it says. He will make his position available as early as mid-February. Brinkhaus proposes to elect the new group leader on February 15th.

No damage to the party in the election year

Brinkhaus was originally elected until the end of April. With his move, he avoids a renewed power struggle in the CDU before the important state elections in Saarland, Schleswig-Holstein and North Rhine-Westphalia in March and May, which would have burdened the election campaigns.

Brinkhaus writes that Merz informed him that he would definitely apply for the group chairmanship. “It’s no secret that Friedrich Merz and I have different views on the chairmanship of the parliamentary group, which we couldn’t dispel either. I think we both have good reasons for our positions,” the letter says. “There must be no dissent that damages the Union – especially in view of the upcoming state elections, the results of which are so decisive for us,” writes Brinkhaus.

“That was practical with an announcement”, Kristin Schwietzer, ARD Berlin, on Brinkhaus’s renunciation of the CDU parliamentary group chairmanship

Brinkhaus is campaigning for support for Merz

Brinkhaus suggested creating clarity quickly and bringing forward the upcoming election of the parliamentary group leader “to the next plenary week, i.e. February 15, 2022”. He himself would then no longer run for the group chairmanship, he announced.

At the same time, he asked the MPs to “support and carry the new group leader in the same way that I have been supported and carried by the group. Because this is the only way we will continue to be successful.” He will of course remain with the parliamentary group as a member of parliament “and, as before, will contribute with great commitment and joy to the success of our joint Christian Democratic and Christian Social project,” said Brinkhaus.

Merz had previously been elected future CDU chairman at an online party conference by the delegates with 94.62 percent of the votes according to party accounts. The election still has to be confirmed by a subsequent postal vote. The result will be announced next week.

Brinkhaus would probably have continued

Brinkhaus has been chairman of the CDU/CSU parliamentary group since September 2018. After the federal election, he was provisionally confirmed in office until the end of April, but made it clear at the time that he would like to keep the post.

Brinkhaus recently said: “If the group wants that and if the group votes for me, then I’ll be happy to continue after April 30.”