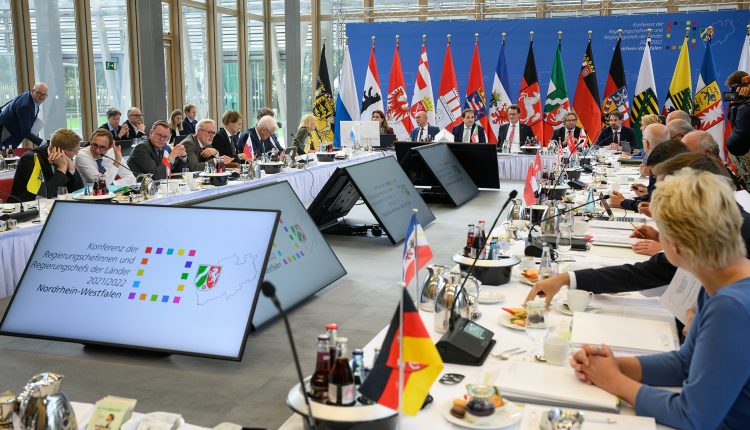 Before the meeting of the prime ministers with Chancellor Scholz, one thing is clear: there is a lot that needs to be clarified. The “defense shield” against the energy crisis will be the topic. The federal states are demanding a higher cost sharing from the federal government.

Chancellor Olaf Scholz (SPD) will meet with the heads of the federal states in the afternoon to discuss the planned “defense shield” against the consequences of the energy crisis. The dispute over the costs is to be resolved today. Because the prime ministers are primarily demanding more money from the federal government to finance the relief package.

Söder: The federal government must accommodate the states

Bavaria’s Prime Minister Markus Söder demands quick and uncomplicated solutions. He is demanding additional funds from the federal government for local public transport, to cushion the high energy costs for hospitals and for the rising costs of refugees.

If the federal government does not accommodate the states here, the consultations between the prime ministers and Chancellor Olaf Scholz (SPD) would again be a “missed opportunity,” said the CSU chairman.

“Today it is important that we take a big step forward – from the announcement phase to the decision phase,” said Söder. The crisis worsened every day, prices continued to explode. It is now important to act quickly and unbureaucratically. It is positive that the federal government has announced that it will initiate 200 billion euros in aid. “The Chancellor called it a double boom. It’s important that it doesn’t turn into a boom afterwards.”

The gas price brake must come in October, demanded Söder. It makes sense to set incentives to save energy. However, this should not prevent fast and effective help. One should “make them larger rather than smaller”. In addition to the gas price brake, an effective electricity price brake and a brake on fuel and heating oil prices are also necessary.

With a view to the financing, Söder urged honesty. The 200 billion euros are not a “special fund” but new “special debts”. The CSU boss made it clear that he sees no way of complying with the debt brake in the Basic Law again in the coming year, as Finance Minister Christian Lindner (FDP) is vehemently demanding.

Rhine: Don’t leave countries out in the rain

The Hessian Prime Minister Boris Rhein (CDU) called on the federal government to be more specific at the meeting on what the relief package and other financial commitments should look like. The federal states would continue to work constructively to combat the energy crisis, Rhein told the “RedaktionsNetzwerk Deutschland”.

At the same time, the federal government must continue to support the states financially: “The 200 billion umbrella cannot mean that the states are left out in the rain,” emphasized the Prime Minister.

For Berlin’s Governing Mayor Franziska Giffey (SPD), the focus is on financing local public transport, hospital financing and the refugee issue. In addition, Giffey called in the ZDF “Morgenmagazin” from the federal government “clarity as soon as possible” when the announced gas price brake will be implemented.

Like Giffey, North Rhine-Westphalia’s Prime Minister Hendrik Wüst (CDU) also called the issue of refugees one of the most important for the consultations with Scholz. “When winter comes, when the cold and wet penetrate the destroyed houses in Ukraine, then more people will come to us,” Wüst told the newspapers of the Funke media group. “We now also need the follow-up regulation promised by the chancellor for financing refugee costs.”

Saarland Prime Minister Anke Rehlinger (SPD) called for “a national solidarity of responsibility so that an economic crisis does not turn into a social crisis.” Rehlinger told the editorial network Germany that it was clear that both the federal government and all state governments wanted relief “so that the Germans do not have to despair of the high energy prices.”

Dietmar Bartsch, the head of the Left Group, is thinking about the pensioners. He calls for an increase in pensions to avoid poverty in old age caused by rapidly rising energy prices. “We need an increase in the pension level that compensates for inflation, and a minimum pension of 1,200 euros,” said Bartsch of the “Augsburger Allgemeine”. Otherwise, due to the considerable inflation, an “old-age poverty avalanche in winter” threatens.

Katja Mast, first parliamentary manager of the SPD, said on tagesschau24 that the price cap was a “very important signal to the population”. It’s all about a common goal. The countries should pay a reasonable share.

Lindner: Support from the federal states

Federal Finance Minister Christian Lindner also insists on support: He called on the federal states to make their contribution to overcoming the crisis. “You have to help each other. But it cannot be that, if I may say so in all politeness, countries simply implement coalition projects, achieve budget surpluses – and the federal government is in the deep red and has to do crisis management,” said the FDP politicians in the ZDF “Morgenmagazin”. “I think the citizens expect all levels of government to do their part to ensure that our country gets through these times without major damage.”

Federal-state meeting: A question of financing