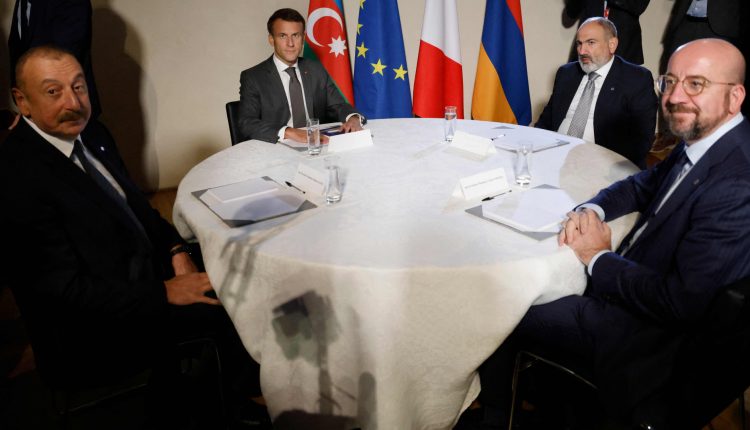 In the Caucasus, the war between Azerbaijan and Armenia is smoldering. In order to prevent a renewed escalation, the EU is now sending a mission to the disputed border between the two countries.

It has been less than four weeks since the smoldering war between Azerbaijan and Armenia escalated again. Azerbaijani troops once again advanced into Armenian territory, thousands of Armenians fled the border region, probably more than 100 soldiers were killed on both sides.

Russian troops, as the protecting power in Armenia, did not prevent the fighting. Russian border guards stationed there were even hit. The CSTO organization led by Russia is also not fulfilling its task as a security alliance and is leaving Armenia alone with the attacks on its territory.

It was Russia, under whose pressure a ceasefire agreement was reached at the end of 2020 and a commission to determine the border was formed. Russia also sent 2,000 peacekeepers to the Nagorno-Karabakh conflict zone on Azerbaijani territory.

But there are increasingly other actors who are exerting more influence. This includes the EU. Its Council President, Charles Michel, has already brought Armenian Prime Minister Nikol Pashinyan and Azerbaijan’s President Ilham Aliyev together for talks in Brussels three times this year.

EU mission in the conflict area

At the Europe meeting in Prague, together with French President Emmanuel Macron, he succeeded in getting the two leaders to agree to a civilian EU mission. She is supposed to leave in October and be in the border area for two months to prevent a renewed escalation there.

The mission will be dispatched to the Armenian side of the border. According to the EU statement, the Azerbaijani side agreed to cooperate with the mission as far as it was concerned.

The mission can also be understood as compensation for the fact that EU Commission President Ursula von der Leyen and Energy Commissioner Kadir Simson have been negotiating more gas deliveries to the EU in recent months. They presented themselves next to Aliyev in Baku and spoke of Azerbaijan as a reliable partner of the EU.

This caused fears not only in Armenia that they would now be alone between Turkey and Azerbaijan. The Armenian diaspora, which is well represented in the USA and France, also reacted. How important their role is in both countries also became clear in view of the recent visit by the head of the US House of Representatives, Nancy Pelosi, to Yerevan and the fact that two presidential candidates traveled to Armenia during the election campaign in France and one even traveled to the Nagorno-Karabakh conflict zone .

EU observer in the Caucasus

The EU has been present with an observer mission in the South Caucasus for 14 years: after the war in Georgia in 2008, France’s then President Nicolas Sarkozy pushed through a ceasefire agreement with the mission as a clause. However, to date, Russia has not allowed observers to patrol the two occupied territories of South Ossetia and Abkhazia.

According to the current statement, the new mission will only be able to become active on the Armenian side. And it is de facto placed in an active war zone, where there are almost daily exchanges of fire, which, weeks later, escalate into larger skirmishes in which Azerbaijan advances into Armenian territory on the disputed border. Apparently with the aim of taking land and keeping the pressure on the Armenian side high enough to give in to Azerbaijan’s demands.

In the Azerbaijani media, the agreement with the EU was presented in such a way that President Aliyev opposed an EU mission on his territory, thereby preserving Azerbaijan’s sovereignty. Armenia, on the other hand, is “handing over” its border to the EU, according to a news portal headline.

Although Aliyev repeatedly sits down with Pashinyan, he remains aggressive and unyielding towards Armenia in his statements. He knows that Turkey is behind him as a political and military ally, although Turkey is also not interested in a massive escalation of the conflict beyond the region. This also applies to Iran in the south. It is another regional power with interests in the South Caucasus, but with which it sees itself on the side of Armenia.

In Armenia’s capital, Yerevan, the EU’s commitment is welcomed with delight. All the more so the more insecure one feels on Russia’s side, whose military is 60 percent involved in Ukraine.

Military expert Richard Giragosian sees the Prague agreement as a “more sustainable, more robust and more assertive policy” for the EU. This is now turning ambitions into action, which has rarely been the case in the region so far. The director of the Center for Regional Studies in Yerevan sees Azerbaijan’s military operation almost four weeks ago as a miscalculation by the leadership in Baku. It was a clear act of aggression “which far exceeds the tolerance and patience of the international community” and has now resulted in the EU becoming even more involved.

Parallel to the mission’s stay on site, which will initially last two months, negotiations are to continue, mediated by the EU, and a Russian-led commission is to work on an agreement on the border between the two countries.

Azerbaijan’s demands on the table affect the identity and fundamental security interests of the neighboring state. In fact, the Armenians are supposed to give up the Nagorno-Karabakh region and also grant an Azerbaijan-controlled “corridor” through their southern territory. This would cut off part of Armenian territory as well as the connection to Iran.

In Armenia, however, the parliament would have to approve a peace treaty, and a majority for both demands is unlikely. It is questionable how a compromise that is acceptable to Armenia can be pushed through towards Azerbaijan in the long term and who can act as a security policy guarantor.