After the CP party congress in China: “New leadership stands for isolation” 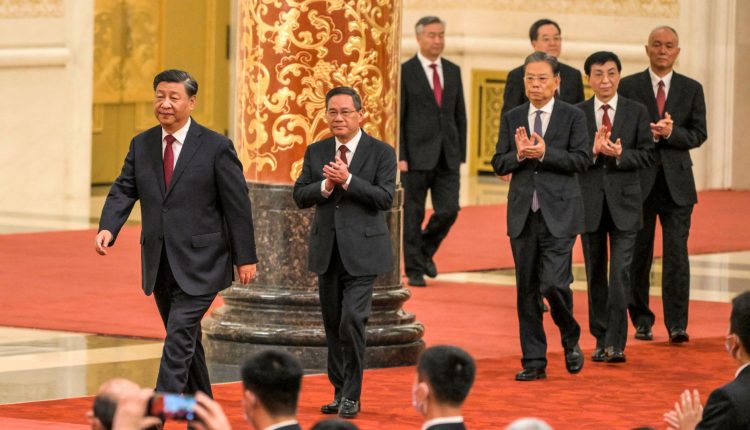 Another term in office for Xi with a loyal following – the Asia expert Rühlig sees China’s new leadership team as a sign of isolation from the West. But that has not yet arrived in parts of Europe and the economy.

tagesschau.de: The new party leadership of the Chinese Communist Party is seen internationally as monolithic. Do you share the impression of unity, and how far does that apply to the party as a whole?

Tim Rühlig: I share the impression that the new leadership is a very monolithic group. Going name by name, almost everyone in key positions has long-standing ties to Xi Jinping. At the same time, one sees that at least two traditional laws that have always applied when filling such posts no longer apply. One is age limits. Xi doesn’t care if someone is still relatively young or has already reached the age limit. He chooses based on loyalty.

And the other is the principle of performance. The party has always boasted that it rewards competence. This will be overridden. This can be seen above all in the naming of the new number two, Li Qiang, who previously worked in Shanghai and was therefore responsible for the disastrous lockdowns in Shanghai. This is a clear indication that this has not harmed him, but that the long-standing cooperation and loyalty to Xi is simply decisive.

Whether that applies to the whole party is another question. In an organization of 90 million members, there is always criticism. That is normal. But once every five years we see how the balance of power is and whether this criticism finds channels to gain influence. This is apparently not the case in 2022. Unlike five years ago, Xi has prevailed across the board this time.

dr Tim Rühlig is a research fellow in the Technology and Foreign Policy program of the German Society for Foreign Relations in Berlin.

“No one who would be the signal of dialogue”

tagesschau.de: The lockdowns have isolated China from the world, but the country has also begun to isolate itself economically. Will this trend continue regardless of Corona in the coming years?

Rühlig: You have to fear that. It cannot be assumed that the zero-Covid strategy will stop. We heard that from the party communiqués and the corresponding reports in the state-owned press shortly before the party congress. But you can also see that in the personnel decisions: reformers were either retired or not promoted.

I see no evidence that the party is trying in any way to build a bridge to the West after this convention. The members of the new leadership that have now been selected seem to me to be more in favor of isolation. There is no one there who would be a signal of dialogue and interest in other countries. In this respect, for me at least at the moment there is no indication that China is striving for more dialogue with the West.

“The threat of war is very real”

tagesschau.de: One can also see this isolation as part of a premonition or preparation for larger conflicts – for example over Taiwan. After Xi’s recent warnings towards Taipei, has an attack of some kind by the people’s army on Taiwan become even more likely?

Rühlig: The danger of war is very real. I don’t believe that this party congress will result in a further escalation of the Taiwan question. Xi repeated what he has said several times now. But: What he has said so far was not very reassuring. Xi is determined to achieve reunification with Taiwan during his tenure and definitely before the People’s Republic’s 100th anniversary. Ideally, of course, peacefully. But there is no realistic scenario recognizable as to how this should succeed.

The first question is: What is the schedule? We can hope that it lasts as long as possible. On the other hand, we must use this time to ensure effective deterrence. If Xi chooses a trade-off between the costs and benefits of a military attack, we have little control over the benefits. But we can try to at least drive up the costs with an effective deterrent. This affects the economy less than the military, because Germany and Europe may not be a major military factor in the Pacific, but they are key economic partners. We must prepare for economic sanctions and must not allow dependencies to become too great.

“Europe is a few steps behind”

tagesschau.de: Do you have the impression that this realization has already reached the Europeans?

Rühlig: Europe is beginning to understand this. But in the USA the knowledge is already much more present.

The realization of how real the danger of war is is not yet sufficiently present in the European capitals. At least the action isn’t geared enough towards it. The recent debate about the sale of shares in a port terminal in Hamburg is exemplary: On the one hand there is a whole range of institutions and actors in Germany, including six ministries, who are opposed to the sale of the terminal. There is resistance in particular from the Chancellery.

In this respect: something is happening. But we are still a long way from where we should be to avoid making the same mistakes we made in relations with Russia.

“China is more of a competitor and a challenge”

tagesschau.de: You address federal politics, especially the Federal Chancellery, but also the Hamburg Senate. The other side are the German companies. Do you have the impression that the latter are behaving appropriately in the situation and are adapting appropriately to the changes in China?

Rühlig: We have to differentiate. German companies are currently investing in China on a record scale. However, these investments are made by relatively few large companies such as BASF. The breadth of German business has understood that China is no longer primarily an opportunity, but rather a competitor and a challenge.

China continues to be seen as an opportunity in certain sectors, notably chemicals and automotive. These companies can certainly see that the window of opportunity in which they have great sales opportunities in China is closing. German car manufacturers hope to see as many German cars as possible on Chinese roads today. But when it comes to electromobility, German automobile manufacturers are not so well positioned. In this respect, they also know that in a few years it will be a matter of how they react to Chinese electric cars driving on German roads.

Nevertheless, these companies want to use the few years in which the combustion engine is still running in China for good business. It’s all about squeezing the last splash out of the lemon. This short-term perspective is frustrating. But to say that the entire German economy has not recognized where the journey is going would be unfair. The BDI represents clear positions towards China. There they recognized the challenges that China was facing in Germany.

“Scholz gives himself for beautiful pictures”

tagesschau.de: Chancellor Olaf Scholz will be traveling to China shortly. In the past, these trips were always about big contracts. What can such a trip bring under the conditions you mentioned?

Rühlig: In principle, it is good when there is a direct personal exchange between a Chinese President and a German Chancellor. During the pandemic, it was only available digitally. That hasn’t done the bilateral relationship any good, even though the problems are far from just communicative.

The problem for me with this trip is the timing. Scholz comes to Beijing shortly after Xi’s “coronation ceremonies” and poses for beautiful pictures for the Chinese President. From my point of view, he could have waited a bit and tried to initiate a working meeting in the EU context. It remains to be seen what agenda Scholz is pursuing when he is in China. His position in the discussion about the port of Hamburg and the fact that he is obviously taking a large business delegation with him again seem like “business as usual” and a focus on economic cooperation. In my view, that would send the wrong signal.

But I think it makes sense that there is also an exchange about a whole range of urgent problems in which China plays a major role, from climate change to Russia, armament projects and so on. Timing and form make me skeptical.

The conversation was led by Eckart Aretz, tagesschau.de

Faeser warns against “shaming” in debates about naturalization